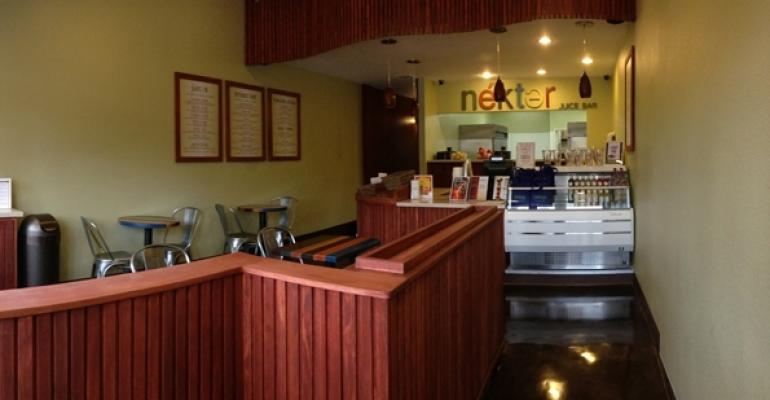 N&eacute;kter makes drinks to order, allowing guests to witness the process that leads to their desired beverage.

The couple founded 11-unit Nékter in 2010 in Southern California. It serves freshly pressed juices and smoothies that incorporate a rich array of fruit and vegetable superfoods — such as kale, parsley, celery, beets and pink Nicaraguan dragonfruit — with no added sugar or flavorings.

Unlike most juice bars, where fruits and vegetables are pressed off site, Nékter makes drinks to order, allowing guests to watch as bunches of fresh produce go into the juicing machines or blenders.

The juicing trend has moved far beyond the wealthy urban housewife, the Schulzes contend. There is growing demand for better-for-you beverages across a much broader demographic — as long as the price is within reach.

While Southern California juice bars typically charge $7 and up for their blends, Nékter’s beverages range from $4.75 for 16 ounces to $8.75 for 32 ounces.

The Schulzes are moving quickly to capture market share in an increasingly crowded space. The chain plans to have 23 units open by the end of summer and move later this year into Northern California and Arizona.

Next year, they plan to expand to the East Coast, with a goal of 100 units within 24 months, mostly company operated.

How did the concept start?

Steve Schulze: Alexis was going to Mother’s Market, which is like Whole Foods, and started juicing, and she got me into it. Mother’s Market was selling 200 to 300 cups of juice a day. So my idea was to develop a cleanse [a sort of juice-only fast over several days, which can cost up to $300], thinking if we sold five of those a day, we might have something. Then we wanted to develop what I really thought a juice bar should be. I looked at what the traditional smoothie places were doing but found their products were laden with sugar and processed foods, and that wasn’t what we wanted. So we reinvented a former gourmet coffeehouse space in Costa Mesa, Calif., into Nékter.

How is Nékter different?

SS: We wanted nothing processed coming through our doors. We want to take fresh fruits and vegetables that are really good for you and make them taste good. A lot of people associate green juices with wheatgrass, and they might have the perception that wheat grass tastes awful. So Alexis worked diligently to take those ingredients, like parsley, kale and spinach, and make them taste good and still keep the integrity.

My goal was to keep it relevant from a price standpoint. There are juice companies out there that are charging $7-$12 for a juice. The everyday consumer can’t afford that kind of price on a daily basis. We want to go to that person who’s working out a bit, who, instead of going to Starbucks or Subway every day, might stop by our place once or twice a week and get used to it.

In it for the long term

Will your growth this year be in corporate units?

SS: Right now we have only corporate stores. We’ve made franchises available to a select few to test that, but we’re very confident in the corporate model. We want to control the brand.

What is on the menu?

Alexis Schulze: We keep the menu very simple. We have a few juice blends and smoothies, along with acai bowls, and people can develop their own custom blends.

I usually start people off with a ‘toxin flush,’ which has apples, lemon, ginger, parsley and spinach. Eventually they’ll work their way up to our signature ‘greenie,’ our greenest drink, with parsley, spinach, kale, celery, cucumber, lemon and apple. It’s like wine: You start with Chardonnay and work your way up.

SS: We do offer grab-and-go drinks that are cold pressed and bottled, for people who want a juice for later in the day.

With drinks made to order, how do you address speed of service?

SS: Starting May 1, we’re launching a mobile app and online ordering that will allow people to order and pay on their phones, set the time for it to be ready. We’ll have a pick-up counter where people can pull in and pick it up. They won’t have to wait in line.

Will the juicing trend come to an end?

SS: No. That’s like asking if Whole Foods will close. If you had asked the CEO of Whole Foods 10 years ago how many he thought they’d build, my guess is he would have said a few urban areas. Now Whole Foods could really be almost anywhere in the country. I don’t think the healthy lifestyle brand is going anywhere.

Do you see Nékter as a national brand?

SS: Oh yeah. The goal is to build out the West Coast. Then next year we’ll go to Florida and go up the coast and come in. We’ll put a distribution point in Texas. We have long-term traditional debt financing from Opus Bank.

I don’t think you can put these in middle American next to a movie theater. But we are starting to push the boundaries out. If you had asked me a year ago how many Nékters we could put in California, it might have been 10. Now we’re looking at 50 to 75 in California alone.

We’re looking at acquisitions to roll up two and three-unit juice bars out there to convert to Nékter, assuming the real estate is right for our brand.

Can you give me any indication of sales?