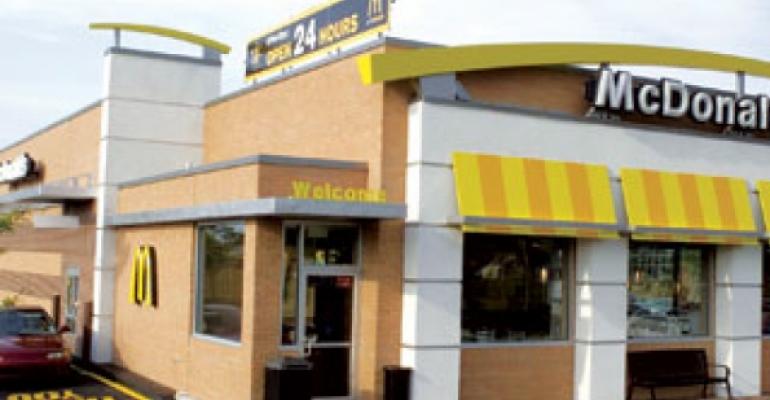 Addressing disappointing results for the Sept. 30-ended third quarter, McDonald’s Corp. chief executive Don Thompson said Friday that few people would have expected the global economy to remain so fragile four years after the financial crisis started and noted that McDonald’s must manage the “new normal” by growing traffic and market share.

Foreign-currency translation and skittish consumer confidence around the world negatively affected McDonald’s third-quarter net income, which fell 3 percent to $1.46 billion, or $1.43 per share, compared with $1.51 billion, or $1.45 per share, a year earlier.

Revenue was essentially flat, at $7.15 billion, compared with $7.17 billion in the third quarter of 2011, though same-store sales did rise in all three of McDonald’s main areas of the world. They rose 1.2 percent in the United States, 1.8 percent in Europe, and 1.4 percent in Asia/Pacific, Middle East and Africa, or APMEA.

Thompson said the relatively weak growth in same-store sales across the world is significant because it's reflecting struggles in every market simultaneously. “Therefore, we are investing to drive traffic and market share, which we know correlates to our long-term growth,” he said. “Our market share is flat or up in all of our major markets, and that’s definitely a sign of strength. It is gaining in some places where we’ve made additional efforts.”

McDonald’s disclosed that same-store sales for the month of October were trending negative. Thompson noted that a focus on the menu would help the company combat this trend and drive traffic and market share in the fourth quarter of 2012 and beyond. Heading into 2013, McDonald's plans on having a faster and more prolific pipeline of new products than it did in 2012, according to Thompson, and the company also will change the way it talks about its value proposition and will put more media weight behind it.

“When we talk about value, we’re not talking aggressive value, but about having a value component that’s a good, solid mix,” Thompson said. “It’s in the neighborhood of 10 percent to 15 percent of sales. In the U.S., earlier this year we talked about the Extra Value Menu instead of the Dollar Menu, and that was to get more margin out of the value offerings we already had. That didn’t resonate as strongly with consumers as we thought, so we went back to advertising the Dollar Menu.”

McDonald’s also will balance that messaging with support for premium products, which include the Chicken Bacon Onion sandwich in restaurants now. The platform, imported from several successful versions in Europe, is McDonald’s first sandwich option presented to customers as a flavor that can be applied to chicken or beef, the latter on the Angus Third Pounder platform.

In addition, the chain will continue emphasizing growth categories like breakfast and beverages and refining operations initiatives like extended hours and double drive-thrus. Through the first nine months of the year, McDonald’s had reimaged nearly 1,500 restaurants around the world and is on pace to remodel more than 2,400 for the year, including 800 in the United States.

McDonald’s move to bolster its value messaging for traffic gains now in the hopes of enticing customers to trade up to premium products later has just begun and needs time to prove itself, officials said. But that dynamic is playing out in several key international markets, giving McDonald’s confidence in the strategy, Thompson said, citing Australia, France and Japan.

The Loose Change value menu implemented in Australia produced an initial surge in guest counts that put heavy pressure on the average check at a time when the McDonald’s system there was lapping difficult comparisons from its 40th anniversary a year earlier. But the Australian system since has begun to trade people up to higher-ticket, higher-margin items like lamb burgers, which has it “trending in a positive direction,” Thompson said.

“In France,” he added, “we needed stronger value, because France is one of those countries where austerity is strong and tourism is down.” McDonald’s responded with Petit Plaisir items and a separate Petit Prix value menu to drive traffic and then worked in a 2-euro Quarter Pounder sandwich “to get a little more margin,” Thompson said.

He also noted that McDonald’s Japan has "been growing guest counts tremendously" and said that the company is "in a position to convert those guest counts into sales and profitability." Though restaurants there continue to emphasize a 100-yen value menu, they also have begun to promote sales of higher-margin menu items with targeted Web and mobile coupons to begin building the average check back up.

Chief financial officer Pete Bensen also pointed out the United Kingdom — which along with Russia has been Europe’s only consistent bright spot this year — as an example of how McDonald’s builds guest counts at the value end of its barbell menu, with a 99-pence Saver menu and then Little Tasters, and then sees those customers branch out into the core menu and occasionally to premium products.

“Strong entry-level value offerings bring incremental customers into our restaurants,” Bensen said, “and over time these traffic gains become balanced with sales gains as the customers migrate to other parts of our menu.”

McDonald’s also is committed to unit growth in several markets, particularly China, where a macro slowdown has not significantly altered the company's goal of opening 225 to 250 restaurants for 2012. Same-store sales in China rose 3.6 percent for the third quarter, lapping a gain of more than 11 percent a year earlier.

“When we talk about market share in China,” Thompson said, “we measure the top five cities where we’ve really focused our growth efforts and continue to gain share.”

Down the road, expanding into China’s interior is part of McDonald’s plans to have 2,000 restaurants in China by the end of 2013, and “that’s where our drive-thru strategy begins to kick in,” Thompson said.

“We expect to see higher volumes in [tier-three and beyond markets] as we move toward more drive-thru restaurants,” he said. “You see increased costs, but you see increased volumes as well.”

Oak Brook, Ill.-based McDonald’s Corp. operates or franchises more than 33,500 restaurants worldwide, including more than 14,000 locations in the United States.