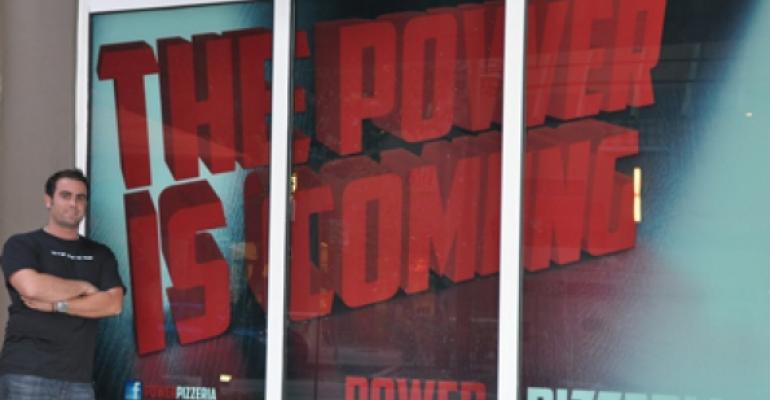 Healthfulness could be a hard sell for restaurants without proper marketing

Consumers love pizza, and many of them want to eat more healthfully, yet drawing a straight line between the two trends is trickier than restaurant brands might think, according to four-unit Power Pizzeria.

EJ Martinez, the brand’s founder and chief executive, said healthfulness is not necessarily a hard sell for his South Florida startup. However, he added, to truly leverage the power of a healthful offering as a restaurant’s differentiator, brands need to carefully choose their words for describing their products' characteristics.

When Miami-based Power Pizzeria opened its first location in 2004, it promoted its pizza’s healthful aspects overtly in its advertising and branding — and struggled to get trial.

“People associate ‘healthy’ with bland or generic,” Martinez said. “So we tweaked our marketing, and now we promote the active lifestyle first. We pitch the product as a ‘feel-good pizza,’ not a healthy pizza. Then that provokes the question: What’s a feel-good pizza?” On in-store signage and the pizza box, the brand’s product is described as “guilt-free” and “better for you,” but not as “healthy,” he added.

Local-store marketing has been key to the chain’s growth, Martinez said. Showing up to office buildings and gyms with free pizzas for sampling has built traffic, especially since Martinez and his staff mention only after everyone has tried a slice that the pizza is more healthful.

Power Pizzeria blends whey protein into its dough, and its sauce is made from organic tomatoes and other ingredients with no added sugar. The cheese the brand uses on its pizzas is part-skim mozzarella, and the meat toppings contain no additives or fillers.

The intended result is a pizza that produces less grease and leaves customers feeling satisfied but not over-served, Martinez said. The less people regret eating Power’s pizza, the more likely they are to be loyal customers and give the brand a reliable base of repeat traffic, he said.

“About 80 percent of our business is loyal customers,” he said. “They feel like they can eat two to four times per month with us instead of once a month. People aren’t willing to sacrifice taste, but we’re getting customers in the door more frequently because they’re not waking up the next day feeling bloated after eating our product.”

The chain's fifth company-owned unit is under construction, and the company recently kicked off more aggressive growth plans. Power Pizzeria just signed its first franchise agreement and is targeting 50 total units in the next five years. The brand will focus mainly on Florida for now, but franchisees would build out other markets.

Beyond Power Pizzeria, restaurants are increasing their use of healthful products, according to a report late last year from industry research firm Technomic. Among the thousands of menu descriptions tracked by Technomic’s MenuMonitor service, the use of the word “healthy” increased 86 percent compared with menus published a year earlier.

While industry research shows an increase in restaurant menus using descriptions and indicators of healthfulness, marketing professionals note that chains looking to sell a health-focused version of an indulgent product or to avoid being pigeonholed as a niche concept for dieters must also be careful about how they present menu items.

The nation’s largest restaurant chain, Subway, has successfully marketed itself as a place for more healthful eating for years, whether by grouping sandwiches with six grams of fat or less on menu boards or advertising with spokesman Jared Fogle and “famous fans” like athletes Blake Griffin and Ryan Howard.

But Tony Pace, chief marketing officer for the Subway Franchisee Advertising Fund Trust, said that because “some of our fans eat with us for healthy as well as indulgent products,” the trick to attracting health-conscious diners without alienating the person coming in for a meatball sub is to talk about lifestyle and consumer choice.

“Health is certainly a big draw,” Pace said, “but you have to give a wide enough array of choices so customers can decided what they want from you in terms of fat, calories and everything else. We’re communicating that you can make good choices at Subway if you want to.”