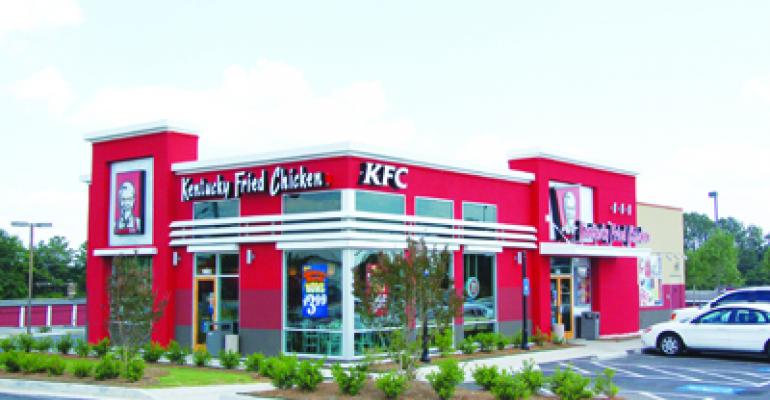 KFC has continued its move toward snack-focused products and digital marketing with the nationwide launch of its Chicken Littles sandwich, which it is promoting through a contest on CollegeHumor.com called “A Little Workplace Humor.”

The slider-size sandwich contains one Extra Crispy Strip, pickles and the Colonel’s Mayo, and is sold a la carte for $1.29, or in a $5 combo including two sandwiches, a side item and a medium drink. KFC first sold the sandwich more than 20 years ago, and according to the demand recorded on KFC’s Facebook page and its phone system at its headquarters, Chicken Littles remain a popular if infrequent offering, similar to McDonald’s McRib sandwich, the Louisville, Ky.-based chain said.

“Taste, value and portability are important to our customers, and Chicken Littles deliver all three,” chief marketing officer Jason Marker said in a statement. “We think fans of the original Chicken Littles are going to love the ‘new Littles’ even more.”

KFC’s last big promotion in mid-July also introduced a snack-size item, Original Recipe Bites. The chain advertised Original Recipe Bites through a traditional television campaign but also supplemented that effort with “Growing Up and Getting Out,” a branded-entertainment series produced by Comedy Central and distributed online.

The Web series consisted of five episodes of original content from KFC and Comedy Central built around Michael, a character who moves back in with his parents after graduating college without any job prospects. Throughout the short comedic videos another character would eat Original Recipe Bites, reflecting a more familiar practice of product placement — but this time in a video produced by the brand looking to sell the product.

Andrew Sarnow, vice president of integrated marketing for Viacom Entertainment Group, wrote in an email to Nation’s Restaurant News that his company, which owns Comedy Central and developed KFC’s previous branded-entertainment promotion, has seen an increase in inquiries for this kind of campaign from many brands for several years.

“In the past two years, the ability to combine original content with a digital and social-media strategy has provided greater opportunity to bring this content to audiences,” Sarnow wrote. “And in the QSR industry, [that means] the ability to reach coveted 18-to-34-year-old men.”

With this week’s introduction of Chicken Littles, KFC is taking another branded-entertainment approach. CollegeHumor.com is helping KFC execute the “A Little Workplace Humor” contest, in which viewers can submit stories of their favorite office pranks for a chance to win the $5,000 grand prize.

In addition, KFC is sponsoring three episodes of the “Hardly Working” Web series on CollegeHumor.com. A character who is victimized by an office prank is seen eating a Chicken Littles combo, and a narrator uses the product’s tagline, “Little is the new big,” at the start of the episode.