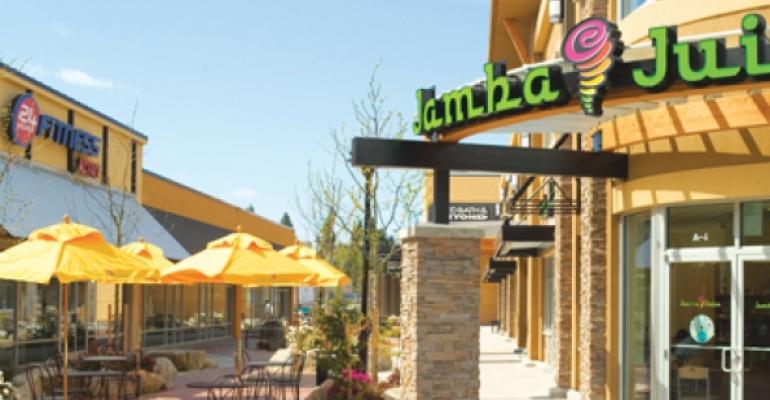 Jamba officials noted that for 2012 the company has changed its reporting format to include 13-week fiscal quarters, which results in 12 fiscal periods versus its approach last year that saw 2011's first quarter include 16 weeks. This means that the fiscal 2012 quarterly results are not directly comparable to fiscal 2011 quarterly results, they said.

Officials said same-store sales rose 12.7 percent at company-operated locations for the 13-week 2012 quarter, compared with a 2.2-percent improvement in the 16-week first quarter a year earlier. They said the latest quarter growth was fueled by an 8.8-percent increase in traffic and 3.9-percent rise in average ticket.

Same-store sales at franchised locations grew by 10.5 percent for the 13-week 2012 first quarter versus a 4.1-percent boost in the 16-week period 12 months earlier, the company said.

Franchise and other revenue, such as royalties from consumer packaged goods, increased 1.7 percent to $3 million on a reported quarter-to-quarter basis during the first quarter as a result of a greater number of franchised locations and rising royalties from Jamba-brand consumer goods. On a pro forma 13-week-to-13-week basis, such revenue grew by 3 percent, from $2.3 million to $3 million, the company indicated.

• The opening of 10 franchised units, including four in the U.S. and six overseas.
• The addition of three new fresh fruit juice blends to the menu, doubling the previous number of such offerings.
• The expansion of the company's position as a "health and wellness" brand with the earlier announced acquisition of Talbott Teas.

“We are implementing our new Blend Plan 2.0 strategic priorities that are designed to accelerate our growth as a healthy, active lifestyle brand through product and menu innovation, retail growth in the U.S. and internationally, and expansion of our consumer products platform," said James D. White, Jamba Inc. chairman, president and chief executive, in a statement about first-quarter results.

He added that the company had high hopes for its growing JambaGo express units intended for schools and stadiums, among other high-traffic areas, and that it expected to triple income from consumer packaged goods royalties to $3 million in 2012, while seeing a doubling in the number of international franchised locations.

Reiterating earlier guidance, company officials said they expect same-store sales at company locations to rise from 3 percent to 4 percent for fiscal 2012 and that they expect the Jamba Juice system to develop 40 to 50 new U.S. locations, as well as 10 to 15 international sites, excluding the addition of any JambaGo express sites.