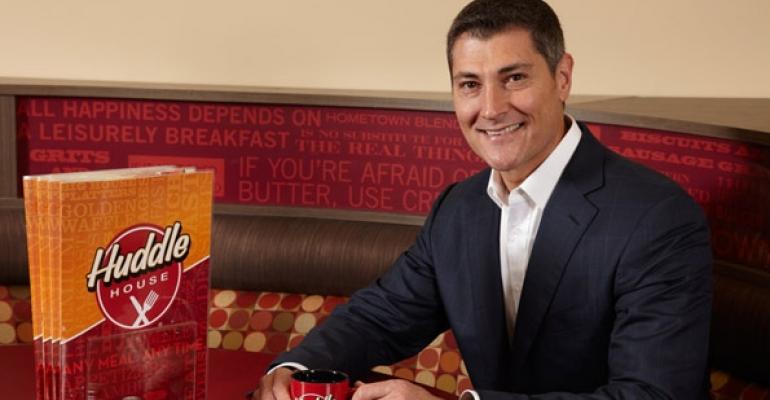 A former Arby’s senior vice president has taken over as chief executive of Atlanta-based Huddle House.

Michael Abt has replaced interim chief executive Ken Keymer at the family-dining chain, and Keymer has joined Huddle House’s board of directors. Most recently, Abt was senior vice president of operations at Arby’s Restaurant Group.

“What we were looking for was someone who was strong from an operations standpoint,” Keymer said. “Someone who had run company stores but also understood franchising.”

The new chief executive was chosen from a pool of seven or eight candidates, he said. Abt’s intelligence and aggressive nature ultimately sealed his job offer. “I don’t mean in terms of being pushy, but he doesn’t let things stand. He moves quickly,” Keymer said.

Abt assumed the position in October. The company delayed announcing the change to allow for a smooth transition between chief executives, said spokeswoman Lauren Kaminski in an email.

“He’s done a very good job with the staff there,” Keymer said of Abt. “He’s developed a very good rapport with the senior management.”

Abt said Huddle House’s variety and quality of food initially drew him to the brand. “From a product standpoint, I thought they were right on,” he said. During the next five years, he said, the company plans to open 100 new units — a number he calls “conservative.”

“First and foremost, our focus is to support our franchisees,” he said, adding that they would be his priority as chief executive. “We want to focus on helping franchisees grow profitably.”

As the company grows in coming years, Huddle House plans to open restaurants in more truck stops and convenience stores, Abt said.

The company also recently went through a restaurant redesign, which started about 18 months ago, Keymer said. The redesigns feature increased seating packages, Abt added, as well as an updated color scheme and signage. “It’s a very warm and inviting restaurant,” he said. “It doesn’t feel like a typical diner. It feels more like a mid-scale restaurant.”

The company’s redesigned Talladega, Ala., location experienced a 25-percent bump in sales during its first three weeks, Abt said.

In coming years, Huddle House’s expansion will focus on the Southeast and Texas. “We see Texas as wide-open space for us,” he said.

In April, Huddle House was acquired by Sentinel Capital, a New York-based private-equity firm. The chain has 395 locations, 12 of which are company owned.