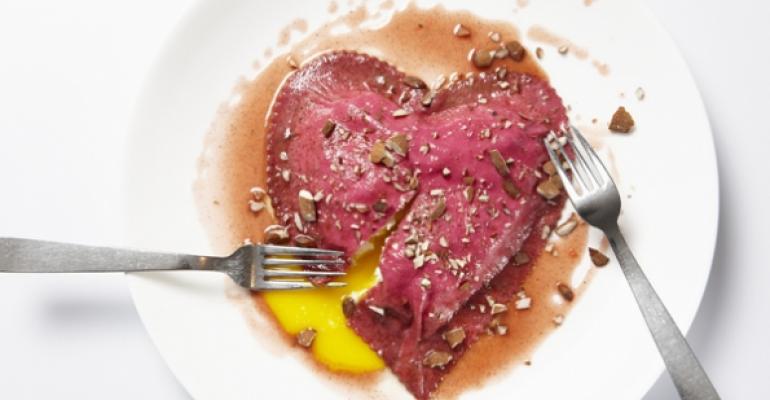 How restaurants can make the most of Valentine's Day

Many restaurants are extending promotions and specials through the weekend to celebrate the holiday.

Valentine’s Day, typically one of the busiest days of the year for restaurants, falls on a Thursday this year — which has operators seeing dollar signs instead of hearts.

This year, restaurants are gearing up for not just one busy night but an extended weekend of romantic dining opportunities.

Lovers who don’t go out on the weeknight are likely to show up on Friday, Saturday or even Sunday, and most restaurants are extending promotions and specials through the weekend.

Valentine’s Day is a bit different than other holidays since most diners usually request tables for two. In addition, customers want value but also don’t want to appear “cheap,” because they’re on a date. The night is typically emotionally charged, and the pressure is on for restaurants to perform.

Still, experienced restaurant operators say opportunities abound for big sales this Valentine’s weekend. At the very least, the holiday presents a chance to reach a broader audience with the hope of bringing them back for more love later in the year.

Here, operators share advice on winning customers' hearts — and business — on Valentine’s Day and beyond.

Patina Restaurant Group, which operates about 60 restaurants on the East and West Coasts, traditionally offers various fixed-price options for Valentine’s Day, which this year are available through the weekend, said Adam Rosenbaum, vice president of operations for the Los Angeles-based group.

However, Patina group has found fixed-price-only menus to be limiting in recent years. Now the group’s restaurants also offer a limited a la carte menu in addition to the set menu to give customers more options and eliminate the veto vote, according to Rosenbaum. “Not everyone wants to do a five-course tasting menu,” he said.

Because of the extended weekend, Leatherby’s Café Rouge, a Patina restaurant in Costa Mesa, Calif., is mixing things up.

On Feb. 14, the restaurant will feature a $90, nine-course menu that starts at 9 p.m. The rest of the weekend, Leatherby’s will offer three- or four-course fixed-price options ranging from $60 to $78, including dessert.

At Ray’s and Stark Bar, a Patina restaurant and bar in the Los Angeles County Museum, or LACMA, chef Kris Morningstar will feature a menu with each dish designed for two. A couple might share a fruit de mer platter, for example, or a giant heart-shaped raviolo made with beet pasta stuffed with ricotta and egg yolk. Even the bar will offer a selection of cocktails for two.

Patina will also cover its bases for diners who either don’t have dates or don’t celebrate Valentine’s Day. Stark Bar is promoting an anti-Valentine’s Day event on Feb. 14 for singles and non-couples by letting them order dishes from its Valentine’s Day menu as small plates.

San Francisco-based Lark Creek Restaurant Group aims to stand out from the crowd by not offering fixed-price menus at its restaurants.

On Valentine’s Day, some restaurants may offer a special dish or beverage, but none will feature fixed-price menus. “We don’t want anybody to feel like we’re taking advantage of them,” McKenna said, noting that some customers may view fixed-price menus that way.

Instead, restaurants add extra staff, replace four- and six-top tables with rented two tops to make more room for couples and prepare to do what they do every night extraordinarily well.

“These special event days are so important for the rest of the year because this is a chance for people to try you out,” McKenna said. “We’re looking to make friends for the long term.”

Still, McKenna acknowledged, “The stakes are high, because if you make a mistake, it’s emotionally charged.”

That’s particularly true for new restaurants like Tapenade in Los Angeles, which opened last month and is still working on building brand awareness.

Chef/owner Ressul Rassallat is also skipping the fixed-price menu and will instead offer an a la carte Valentine’s Day menu all weekend. As a special, Tapanade will offer a glass of Perrier- Jouët Champagne for $15.

“I don’t want to force people to spend $100 or $80. I want to give them the flexibility to spend $40 if they want to,” Rassallat said. “This is a neighborhood restaurant and I want people to feel like they can come three or four times a week.”

Offer a deal they can't refuse

Romance may be in the air, but so is the desire to find a good deal, said Steve LaHaie, managing partner of the two-unit Shaw’s Crab House restaurant in Chicago, which is owned by Lettuce Entertain You Enterprises.

This year, Shaw’s will offer half a dozen Island Creek oysters and two glasses of Piper-Heidsieck Brut Champagne for $25. Typically, the combination would be priced at $44.

Other deals at Shaw’s for the weekend include South African lobster tail and filet mignon, prepared three ways and priced from $56.99 to $61.99, or Dover sole for $43.99.

Shaw’s suburban location will turn a private party room into an all-you-can-eat crab buffet for $56 for the weekend.

While lobster, crab and oysters are always popular on Valentine’s Day, this year Shaw’s is deliberately selecting more affordable price points, LaHaie said. “Last year we did a full dozen oysters, for example, and it was more expensive,” he said. “This year I think people are more value conscious.”

At Abuelo’s, a 41-unit casual-dining chain based in Lubbock, Texas, the Valentine’s Day special includes fajitas for two, plus a free dessert, for $29.99.

Guests can select from a number of fajita options, from marinated steak to bacon-wrapped stuffed shrimp, served with the traditional peppers and onions, or mixed vegetables, charro beans, housemade guacamole, sour cream, shredded cheeses and a choice of corn or flour tortillas. Dessert includes either warm sopapillas with honey, or flan for sharing.

Bob Lin, president of Abuelo’s parent company Food Concepts International, said the chain aimed to design a deal that is “attention grabbing” without seeming cheap. “That can be a negative if you’re on a date.”

The fajita deal shows off one of the brand’s premium dishes and is something that will appeal to a broad Valentine’s Day audience, he said.

“We’ll have an opportunity to show off the restaurant to newer guests and those who might not come in as often,” he said. “We’ll approach it the same way we do any other day: Make every guest happy.”