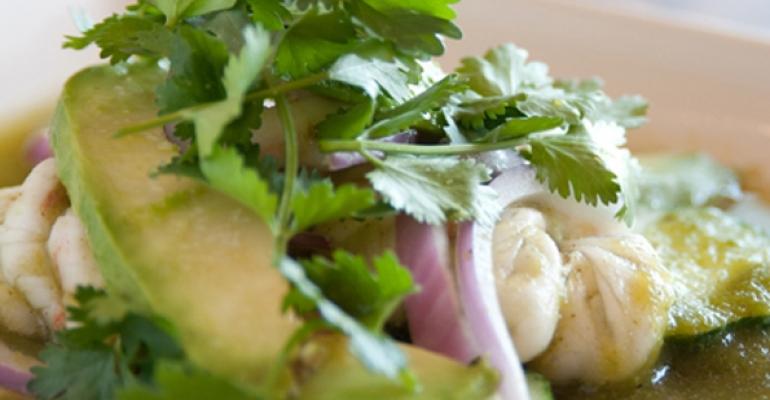 Toasted breads and high-end takeout are among offerings expected to be popular in restaurants next year, says hospitality consultant Andrew Freeman

In the fifth annual trend-spotting webinar by public relations and marketing firm Andrew Freeman & Co., principal Andrew Freeman said 2013 will be a year of evolution that will force restaurants to look for opportunities for revolution.

“With the economy upswing not swung all the way back, we’re encouraging people to revolt, to break some rules, be brave and stay ahead of the competition,” Freeman said.

Some of the trends Freeman predicted are a continuation of familiar themes from recent years. For example, he said bar food will increasingly play a role in restaurant dining, offering all-day menus for snacking and helping restaurants lose their special-occasion-only place in consumers’ minds. “Bar food, I think, is as important as dining room food,” he said.

Exhibition kitchens and breaking down the walls between the front and the back of the house will also continue, Freeman said. He pointed to Martin Yan’s soon-to-open M.Y. China in San Francisco, which will have a master noodle puller performing in the dining room — an example mentioned on Freeman’s trend list last year.

The increasing importance of health, including gluten-free menus and use of fresh juices, is also an ongoing theme. Food trucks have become permanent fixtures, and the locavore movement is still hot — though Freeman warned restaurants to avoid citing the source of every single item on the menu.

“Be really committed,” he said. “But be credible. If you have that commitment, your customers will know you’re there already.”

The year of toasted bread

Freeman said 2013 will also be the year of toasted bread. Replacing complimentary baskets of bread are bread-board samplers with a selection of toasted options that are served with a variety of toppings, as well as sweet and savory crostini and signature rolls.

The Greenhouse Tavern in Cleveland, Ohio, for example, charges $15 for a bread board designed for two to four with house-made jams, conserves, yogurts, spreads, schmears, dips, butter and “rendered fatty animal love” with a selection of grilled breads, wheat-stalk-shaped pain d’epi, house crackers and country bread. And The Bachelor Farmer in Minneapolis has a section of “toasts” on the menu with toppings such as warmed camembert, grilled savoy cabbage and Winterbor kale; sugar-and-salt-cured salmon with sweet mustard sauce and pickled cucumbers; or beef tartare.

Modern takes on Latin cuisine — what Freeman has dubbed “Nex Mex” — will also be popular next year, with restaurants like the Mexican flavored Copita Tequileria y Comida in Sausalito, Calif., and Empellón Cocina in New York offering seasonal, chef-driven dishes with top-quality ingredients. The cuisines of Argentina, Brazil and Chile are also catching fire, Freeman said.

Restaurants are also increasingly offering snacks for less than $5, such as the lapsang souchong tea deviled eggs with Chinese bacon at E&O Asian Kitchen in San Francisco, he said.

And in a marketing trend, a growing number of high-end restaurants are developing family takeout menus with familiar favorites packaged for reheating.

“Really make sure everything works and tastes good and is well thought out,” warned Freeman. “It’s definitely an extension of your food, and not every dish will work.”

Ingredients and drinks to watch

Here are the individual ingredients Freeman predicts will be appearing more on restaurant menus next year:

• Pork secreto, which was described as “the hangar steak of pork — very tender”
• Ancient grains, such as bulgur and freekeh
• House-made ricotta (the new burrata)
• Lamb belly (the new pork belly)
• Lamb or goat neck
• Vegetable noodles as a replacement for traditional wheat noodles
• Push-pop ice creams
• Pig heads to share for a group

In the beverage world, Freeman said aperitifs and digestifs are growing in popularity with offerings such as small-batch vermouth. The pre-mixed cocktails in bottles and cans trend will also continue, and Freeman said vegetables will increasingly appear in cocktails. Consumers will discover Corsican wines, as well, and sherry is making a comeback.

Restaurants are also getting creative with wine pricing. For example, they're offering some wines by the ounce and half bottles at half price, and some menus stick with one price for all wine within a certain category. Among the hot drinks for 2013: