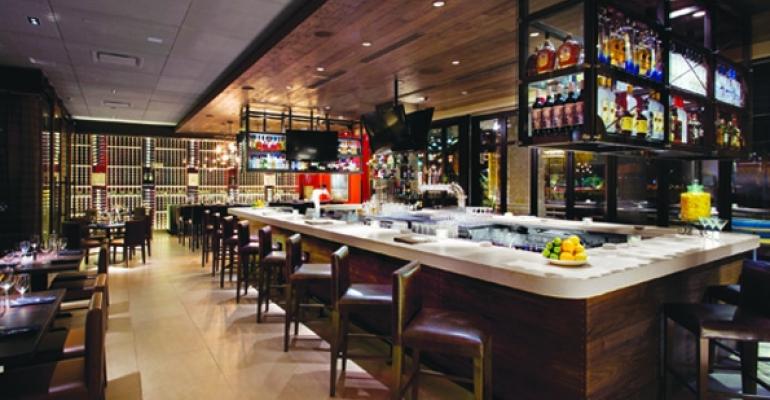 NRN profiles one of the four 2012 Hot Concepts award winners

The Hot Concepts awards are given each year by Nation’s Restaurant News to young, growing chains that embody the perseverance and entrepreneurial spirit of the restaurant industry. Here, we profile one of the four 2012 Hot Concepts award winners.

A look at Del Frisco's Grille in Dallas

Mednansky knew few people would be able to eat at DFRG’s 28 premium steakhouses nightly, but his hunch was his customers were not homebodies who only visited his places.

“We figured they were at Brio [Tuscan Grille] or P.F. Chang’s [China Bistro], exciting venues that cost less than our concepts but still were polished and upscale,” he said.

The brands owned by DFRG, a Southlake, Texas-based company that recently began trading on Nasdaq, were known chiefly for their premium beef and fine wines, assets that Mednansky and his team wanted to maintain in a scaled-down concept that was more affordable and casual.

“Not everyone wants to make a special occasion of going out to dinner, especially a business traveler who wants a good meal, but wants to relax,” he said. “We wanted to create a place where, if that guy wants it, he can have that good steak, but also a place where he can have a great burger or flatbread if he wants only that, and pair either with a fine Bordeaux.”

Five years that Mednansky said “seemed like endless menu tasting” and working with designers and architects yielded Del Frisco’s Grille in 2011. Now a four-unit concept with a trim yet varied menu and an equally lean but still eyebrow-raising wine list, each Grille has a 7,500-square-foot floor plan that includes seats for about 260 and ample standing room around the bar.

“Our customers like to socialize in a bar that’s a fun and very beautiful setting,” Mednansky said, adding that about 38 percent of total revenue is generated through beverage transactions. “It’s three- to four-people deep every night around our bars.”

Dritsas said the final lineup was the product of constant collaboration among DFRG’s many chefs.

“A lot of people contributed their ideas, many of which were features that had sold successfully in our other brands,” he said, referring to those restaurants’ nightly specials. “Taking what we already knew from our steakhouses and putting that into a casual concept played a big hand in diversifying the menu.”

The average check is $53, which compares with about $110 at a traditional Del Frisco’s. Even with a build-out cost of about $3.25 million and placement in high-demand locations, Mednansky said he expects Del Frisco’s Grille to deliver a return on investment in as little as two to three years.

DEL FRISCO'S GRILLE AT A GLANCE

Overlooking Manhattan’s Rockefeller Center, the first Grille opened in August 2011 and tallied $5.5 million in sales from October of that year to March 2012. Its second location, in Dallas, rang up $1.9 million in sales in the first quarter of 2012.

The concept’s positioning of affordable luxury is correct for the times and is properly targeted toward increasingly educated diners, said Dennis Lombardi, a consultant with WD Partners in Dublin, Ohio.

“Premium casual seems to be one of the better-performing subsegments right now, partly because it provides more opportunities for frequency than high-end dining does,” Lombardi said. “I think the whole variation on a theme of what’s worked well for them already is very good. I give it better than equal odds of doing well.”