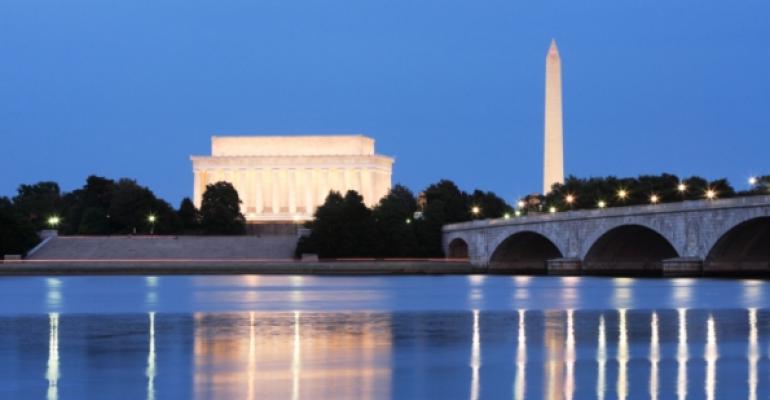 Hundreds of restaurateurs and association officials gathering in Washington, D.C., to lobby elected officials on Capitol Hill had something to cheer about Wednesday when lawmakers unveiled two pieces of legislation favored by the foodservice industry.

Attendees praised eight U.S. Senators — known as the “Gang of Eight” — for crafting a bipartisan immigration reform package that addresses many of the elements the industry has been lobbying for, including a pathway to legal work status for many undocumented workers already residing in this country.

They also voiced support for legislation introduced by U.S. Sens. Bob Casey, D-Pa., and John Cornyn, R-Texas, that would make permanent the 15-year depreciation schedule for restaurant improvements. Currently, the provision must be renewed every year or it will return to the original 39 1/2-year schedule, which the industry argues is unrealistic.

However, the 600 operators and association executives participating in the National Restaurant Association’s 2013 Public Affairs Conference also had plenty of concerns to share with lawmakers regarding a tsunami of federal policy issues such as health care reform, minimum wage, menu labeling and rising food costs tied to the use of corn in such biofuels as corn-based ethanol.

Dawn Sweeney, president and chief executive of the NRA, discussed the shifting legislative landscape in Washington, telling participants that political advocacy these days is critical to the future of the industry. She pointed to “the magnitude of the issues,” which are “larger and more complex” than in the past. At the same time, she added, “Our adversaries are more well-funded.”

In particular, Sweeney cited the Patient Protection and Affordable Care Act, calling it “the most daunting, vexing challenge the industry has yet faced. There are 19,000 pages of regulations trying to explain the law ... and few employers understand the law and its implications.”

Lawmakers addressing attendees of the two-day conference also discussed aspects of the sweeping health care reform act. Rep. Kevin McCarthy, R-Calif., said “Obamacare will be one of the biggest issues” the country has ever faced.

“It’s not ready,” he declared. “It’s a train wreck waiting to happen.”

Sen. Jeanne Shaheen, D-N.H., acknowledged the wide-ranging uncertainty fueled by health-care reform, saying Congress must address such aspects of the law as the definition of full-time employees and the auto-enrollment mandate — which requires operators with more than 200 full-time employees to automatically enroll full-time workers in the company's lowest-cost health plan unless the employee opts out by a certain time.

Although the mandate is due to take effect in 2014, the Labor Department said it wouldn't require employers to comply until regulations have been issued to explain the rule.

“I will work with the Department of Labor to see that you can live with that,” Shaheen said.

Association officials advised that attendees focus on several provisions of the health care law when they visited their lawmakers on Capitol Hill, including the definition of full-time employees, the definition of large employers and the auto-enrollment mandate.

Officials also said lawmakers need to address uncertainty surrounding health care plans. Employers are still not clear about what health care plans meet minimum value and affordability standards, and what premiums will cost next year, when they must begin to offer insurance to full-time employees.

While much of the attendees’ concerns were focused on the looming PPACA, they sounded a note of optimism concerning the long-awaited introduction Wednesday of the bipartisan immigration measure in the Senate.

In addition to offering a “tough but fair” path to legal work status, “The Border Security, Economic Opportunity, and Immigration Modernization Act of 2013,” or S.744, would establish a national employment verification system that would help to prevent identity theft and curtail the hiring of illegal workers; improve border security to reduce illegal border crossings; and encourage legitimate travel and tourism to the United States.

Industry leaders led by the NRA’s Sweeney met with three members of the “Gang of Eight” and White House officials to discuss immigration reform priorities for the industry.

DeFife said the restaurant industry, at every level, “reflects the diversity of the nation. And while he acknowledged that while not every provision in the bill is optimal — a guest worker program only provides for 20,000 guest worker visas — “they’re not so bad that they will weigh down the bill. It’s time for Congress to act [on immigration]. We need it for the industry. Everybody is aligned.”

Another issue that concerns foodservice operators is the threat of increasing the federal minimum wage. In his State of the Union address, President Obama called for the minimum wage to be increased to $9 an hour from its current $7.25. Soon afterwards, Sen. Tom Harkin, D-Iowa, and Rep. George Miller, D-Calif., introduced a measure to raise the federal wage to $10.10 by 2016.

The NRA argues that this is a particularly bad time to hike in the minimum wage, given the rising cost of food and pending costs associated with health care reform. As a result, a hike would further curtail the hiring of more part-time and entry-level job seekers.

NRA officials advised attendees to support the bill just introduced by Casey and Cornyn that would make permanent the 15-year depreciation schedule for restaurants, retail and leasehold improvements and new construction.

The NRA maintains that a 15-year span better reflects the economic realities of the typical restaurant, which tends to renovate every six to eight years to address wear and tear. It also improves cash flow and encourages investment. If not made permanent, the depreciation schedule will return to a 39-and-1/2-year schedule.

While the Food and Drug Administration is expected to publish the final regulations for menu labeling by this fall, grocery and convenience stores, meanwhile, are backing the “Common Sense Nutrition Disclosure Act of 2013,” a bill that would exempt them from having to label prepared foods in their establishments. DeFife recommended that operators oppose the bill, which he said would set up an uneven playing field. “It’s the food, not the format, he said.

Up on the Hill

Following the conference, state delegations headed up to Capitol Hill to discuss the issues with their elected officials or members of their staff.

The delegation also visited the offices of Sen. Robert Casey Jr., D-Pa., where they thanked his legislative assistant, Jennifer McCloskey, for the senator’s lead in introducing the bill to make the 15-year depreciation schedule permanent. Patrick Conway, president and chief executive of the Pennsylvania Restaurant and Lodging Association, also emphasized the need for comprehensive immigration reform, noting that there had not been a more opportune time in many years.

William Kohl, a principal of the Greenwood Hospitality Group in Harrisburg, Pa., also addressed the subject of minimum wage, noting that an increase would make it more difficult to hire new workers. “If we can’t hire them affordably, it squeezes out part time and entry level workers,” he said.