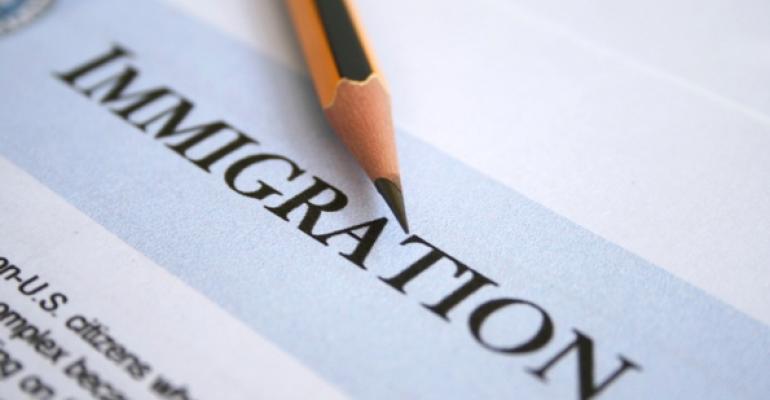 The proposed legislation would provide a path to legal work status and a national employment verification system.

Industry officials voiced their support for the newly introduced comprehensive immigration reform legislation that had been previewed last month by a bipartisan group of U.S. senators.

The senators — known as the “Gang of Eight” — unveiled Wednesday “The Border Security, Economic Opportunity, and Immigration Modernization Act of 2013,” or S.744, which many proponents hope will help to repair the nation’s immigration laws.

The centerpiece of the legislation is a “tough but fair” path to legal work status — and potentially citizenship — for the estimated 11 million immigrants in the U.S. illegally. It would take a decade for undocumented immigrants to get a green card and then another three years to achieve citizenship. They also would have to pay a fine and back taxes, and pass a background check.

In addition, the bill would establish a national employment verification system that would help to prevent identity theft and curtail the hiring of illegal workers; improve border security to reduce illegal border crossings; and encourage legitimate travel and tourism to the United States.

President Barack Obama had said earlier that he would make immigration reform a key priority during his second term and has urged lawmakers to support the measure.

Estimates from the U.S. Bureau of Labor Statics indicate that about 1.4 million illegal immigrants work in the U.S. foodservice industry, which employs a total of 13.1 million workers.

“We commend the ‘Gang of Eight” for their leadership in crafting a comprehensive reform bill to help fix our nation’s broken immigration,” said Dawn Sweeney, president and chief executive of the National Restaurant Association, in a statement. “The opportunity is now. This is a year for Congress to pass sensible immigration reform.”

The NRA, she continued, “has been involved in the immigration reform debate at each step of the process for over two decades…and we are pleased to see some of the most critical priorities of the restaurant industry addressed in this proposal.”

On Wednesday, restaurant industry leaders led by the NRA’s Sweeney met with Sens. McCain, Graham and Flake of the “Gang of Eight” and then Thursday met with White House officials to discuss immigration reform priorities for the industry.

According to Angelo Amador, the NRA’s vice president of labor and workforce policy, said the meetings were productive and all parties were enthusiastic about the prospects for moving the measure forward. “We’re firmly behind this bill,” he said. “We understand we need to be careful going forward.

“We need a strong vote in the Senate to get the House moving,” he added.

Scott DeFife, the NRA’s executive vice president, policy and government affairs, told attendees of the association’s annual Public Affairs Conference in Washington Wednesday that while not every provision in the bill is optimal — a guest-worker program provides for only 20,000 guest-worker visas — “they’re not so bad that they will weigh down the bill. It’s time for Congress to act [on immigration]. We need it for the industry. Everybody is aligned.”

Steve Caldeira, president and chief executive of the International Franchise Association, also voiced support for the measure, saying, “We commend the ‘Gang of Eight’ senators for their diligent work in pursuing the wide-ranging goals of the business community … to create a comprehensive immigration reform bill that addresses many of the shortfalls with our current immigration system in America.”

Caldeira praised the bill’s authors for including such provisions as the establishment of a mandatory E-Verify system and a new W-visa program, which enables employers to hire foreign workers for less-skilled jobs, but only after Americans have had the opportunity to fill those jobs first. He called the visa “a positive step toward creating a pathway for the future flow of workers needed to fill jobs in the restaurants, hospitality and service sectors in franchising.”

He called the bill a “historic achievement, but much work still needs to be done.” He said the NRF would examine the size, scope and phase-in schedule of the new, mandatory employer verification system — E-Verify — the employer-employee contractual obligations and other labor and workforce-related requirements.