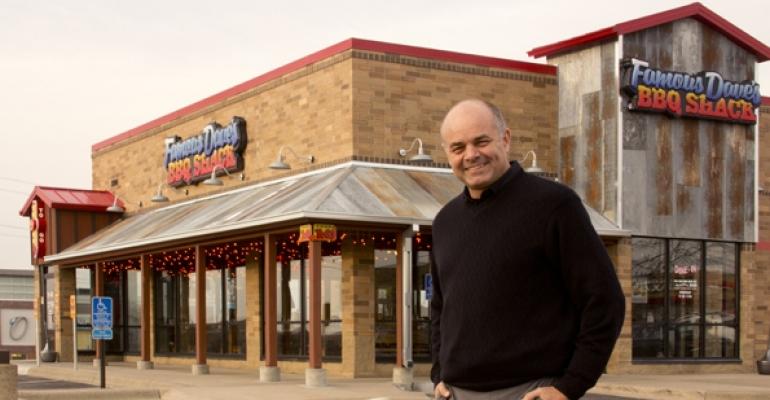 Officials at the Minneapolis-based company said the Shack would become a significant growth vehicle for Famous Dave’s in the near future as the company also looks to increase sales of carryout and catering at the fast-casual variant and the legacy casual-dining restaurants.

Introducing a fast-casual variant for Famous Dave’s makes the brand’s food more relevant on an everyday basis and less dependent on special-occasion appeal, said Brett Larrabee, director of franchise sales and development. He noted that fast casual “is the wheelhouse of people’s lives,” and pointed out that a “better barbecue” niche has not been claimed yet.

Chief executive John Gilbert added that the fast-casual BBQ Shack will help the brand better reach its target customer, the female head of household who makes the majority of meal purchasing decisions.

“Women don’t want to survive at mealtime, they want to win,” he said. “The higher-order need here is to make Mom a winner. I don’t think we’re in their space all the time yet, but we can be with this BBQ Shack — if it’s a comparison [between competitors and us] on speed, flexibility and portability, and quality, we’ll win on those dynamics.”

Larrabee said that market trends make fast-casual concepts ideal growth vehicles for franchisees right now. “A lot of restaurants have been shaken out of fast casual and fast food, so there are a lot of empty boxes out there that fit the Shack’s size, as well as old Blockbuster Video buildings and other end-cap orientations,” he said.

Economic shifts in commercial real estate have also opened up opportunities on which Famous Dave’s could not capitalize before with just its typical 6,000-plus-square-foot stores. The Illinois location of the Shack was slightly larger than 4,000 square feet.

“These Shack footprints are not only less expensive to build, but they’re also more neighborhood-focused,” Larrabee said. “We don’t need to be in the power center next to the Best Buy to make the ROI work.”

He added that, because fast-casual barbecue is a largely undefined segment, the BBQ Shack fits in the portfolios of current Famous Dave’s franchisees who want to grow in smaller markets or of operators of other brands looking to round out their holdings without having to worry about cannibalizing their burger and chicken concepts.

Most malls and landlords do not have noncompete clauses for barbecue concepts, either. “That’s how this Shack has the wheels it has,” Larrabee said. “If it were just another burger concept, there’d be all sorts of problems, because there would be exclusive stipulations in the mall, or the franchisee would already have a burger chain, or the market is already saturated.”

Just as franchisees hope the BBQ Shack would complement their existing locations of the casual-dining Famous Dave’s, the franchisor also plans for the fast-casual variant to help grow sales and awareness for the legacy brand.

“The biggest thing is that the Shack enables us to get deeper penetration and brand awareness and customer sampling in a market where heretofore we couldn’t,” Gilbert said. “We may be able to do multiple Shacks in one trade area given the initial success we’re seeing. Before, we’d do one big Famous Dave’s and move on to the next trade area.”

The big-box casual-dining brand also would have the opportunity to refine its model for the types of visit at which it excels, but hopefully with more traffic from Shack customers satisfied with the food they first encountered in the fast-casual variant, Gilbert said. With the traditional Famous Dave’s logically being the place where Shack customers would celebrate a special or “larger than normal” occasion, the brand is upgrading its selection of craft beers.

“That ties in very nicely with how the big box works: It’s much more celebratory, and it asks for a longer time commitment from the consumer,” Gilbert said. “Guests have a wide range of occasions, and the Shack solves for a quicker occasion, especially if I’m by myself or with just my son. But if the whole family wants to spend time together, they may go to the big box. The food is the enabler of all this.”

The casual-dining version of Famous Dave’s and the three Shack units currently are pursuing catering business without much synergy, but the company is closely monitoring how takeout and catering progress at the fast-casual restaurants to see if any lessons could be applied to the legacy brand, he added.

But Famous Dave’s would not have to worry about promoting two separate brands differently. Last week, the company made a major realignment of its marketing department to begin advertising not with overall new-product news, but with individual messaging for four key lines of business at both the big-box and fast-casual brands: dine-in, carryout, catering and retail.

Because marketing responsibilities will be split among four people overseeing the separate revenue streams, Aric Nissen no longer is vice president of marketing and research and development, and he left the company last week, Famous Dave’s announced.

By addressing customers in different ways for their varied needs, Famous Dave’s hopes to turn around soft same-store sales, Gilbert noted. “The opportunity,” he said, “is to be very specific about how we solve your main meal needs, Mrs. Female Head of Household.”