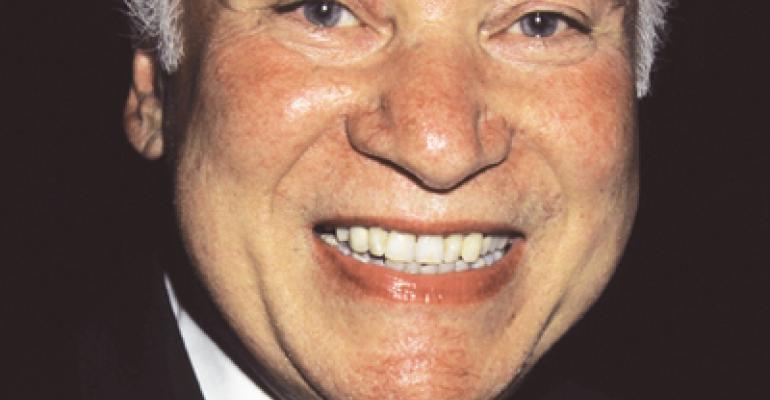 Fine-dining legend George Lang died on Tuesday. He was 86.

“He belongs to a period of the great Barnums of the restaurant business,” said New York food writer Gael Greene said, referring to circus showman P.T. Barnum. “He brought his own Hungarian exuberance to the mix. It was wonderful to see what he did in reviving Café des Artistes.”

Drew Nieporent, head of Myriad Restaurant Group in New York, said of Lang: “He was a brilliant thinker and understood the psychological aspects that go into both operating a restaurant and pleasing the guest.
And he was very generous with his knowledge. We’re not going to see a renaissance man of that kind again, I believe.”

“Born in Székesfehérvár, Hungary, the son of a Jewish tailor, Lang was imprisoned in a concentration camp during World War II at age 19.

After his liberation, he moved to the United States and pursued a musical career as a violinist. But, as he describes in his 1998 autobiography, “Nobody Knows the Truffles I’ve Seen,” listening to musician Jascha Heifetz play a Mendelssohn concerto, he realized he “would never be able to play like that.”

Rather than be discouraged, he “awoke overwhelmed by a good feeling about a new life,” he wrote. “Perhaps I would be able to choose a profession in which, just maybe, I could be a Heifetz.”

Lang began working in restaurants, running banquets at the Waldorf Astoria hotel in New York that included state dinners in the 1950s with such guests as Soviet premier Nikita Khruschev and Queen Elizabeth of Great Britain.

In the 1960s he worked for Restaurant Associates with another famous restaurant impresario, Joe Baum. Lang spent several years developing restaurants all over the world for RA, until he was named director of The Four Seasons in New York in 1967.

In 1970 he was wooed by both the Marriott and Loews hotel groups, and rather than choose one of them he opened his own consulting firm and worked for both companies.

For the next 15 years he developed restaurants for a wide array of clients from all over the world. In 1975 he took over Café des Artistes, a restaurant that had originally opened its doors in 1917 and was decorated with a series of renowned murals painted by Howard Chandler Christy.

“If ever a restaurant had fine, aristocratic bone structure, it is Café des Artistes,” William Grimes, then The New York Times’ restaurant critic, wrote in a 2003 review of the restaurant.

Lang also went on to resurrect Gundel, a classic restaurant in Budapest, Hungary, that first opened in 1894 in 1991.

In 1999 Lang was inducted as a Nation’s Restaurant News Fine Dining Legend. At the time he told Nation’s Restaurant News: “I’ve never yielded to the temptation of quick profits at the expense of quality. I also have enjoyed creating something that wasn’t there before and bringing historic restaurants such as Café des Artistes and Gundel back to life.”

But Café des Artistes began to flag in its later years. Grimes gave the restaurant two out of four stars in his review.

Lang closed Café des Artistes in 2009. His wife and the restaurant’s general manager, Jennifer Lang, cited Lang’s age and declining sales as the reason for the closure.

The space reopened earlier this year under different ownership as the Leopard at des Artistes.

A memorial service for Lang is being held at Riverside Memorial Chapel in New York City on July 11 at 4 p.m. In lieu of flowers, Lang’s widow, Jennifer Lang, requests that contributions be made to the Fales Library at New York University.