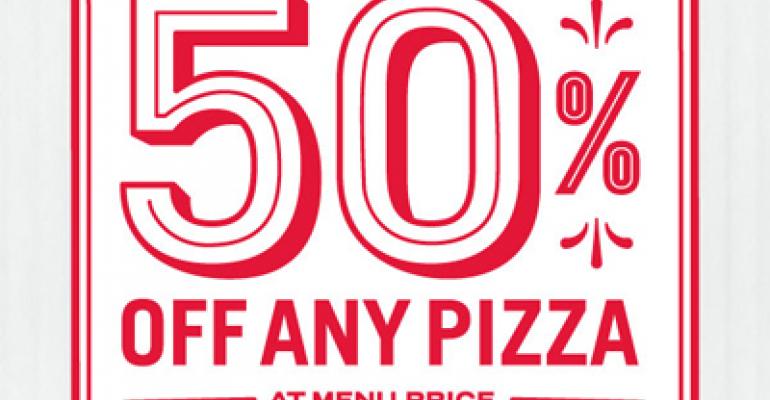 Domino’s Pizza said Monday it surpassed $1 billion in digital sales during the past 12 months, through April, and that sales from its digital platforms — including its website, mobile-ordering platforms, and iPhone and Android apps — now account for 30 percent of sales.

The 9,810-unit chain is offering customers in the United States 50 percent off pizzas ordered online this week on Domino’s digital-ordering channels.

“We love our online customers and have learned so much from them during the past five years about how we can continue to deliver the best online-ordering experience in the industry,” Russell Weiner, Domino’s chief marketing officer, said in a statement. “Reaching $1 billion in online sales during a one-year time period is a major milestone, and we hope offering this amazing deal for an entire week lets our fans and customers know how much we appreciate them.”

The pizza segment, particularly Domino’s and its two biggest competitors, Pizza Hut and Papa John’s, has led the restaurant industry’s exploration into and adoption of digital ordering over the past several years.

Pizza Hut launched the sector’s first iPhone app in 2009, then released an updated version in May 2011, along with apps for Android phones and the iPad. Earlier this year, Pizza Hut chief information officer Baron Concors told Nation’s Restaurant News that those apps have been downloaded more than 5 million times, and predicted that customers soon would order via mobile Web browsers more than they do from their computers.

Papa John’s is the only major pizza player with an online loyalty program, which it calls Papa Rewards. The program has been a focus for Papa John’s marketing strategy, including its most recent tie-in for the Super Bowl, in which Papa Rewards members were eligible to receive a free pizza because they correctly called the Super Bowl coin toss. In the chain’s most recent earnings conference call, chief marketing officer Andrew Varga said online sales now account for more than 35 percent of Papa John’s sales.

Domino’s said its online-ordering platform debuted in 2008 and that digital sales have grown steadily since then. The chain introduced its iPhone app in June 2011, and an Android version this past February, and between both apps, Domino’s can serve 80 percent of all smartphone users in the United States, it said.

The chain’s app is the fifth-highest-selling app in the “lifestyle” rankings on Google Play, the marketplace for Android apps. Domino’s iPhone app also garnered the No. 15 ranking for “lifestyle” apps in the iTunes Store, the company said.

Ann Arbor, Mich.-based Domino’s Pizza Inc. operates or franchises 4,898 restaurants in the United States and another 4,912 in 70 foreign markets.