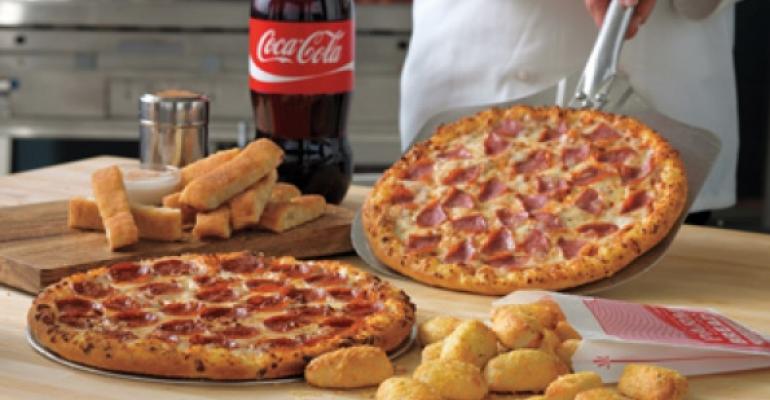 Domino’s Pizza has begun selling the Domino’s Perfect Combo, a bundle deal that the chain said was developed in response to feedback from Hispanic customers.

Domino’s came up with the $19.99 deal — which combines two medium one-topping pizzas, a two-liter Coca-Cola product, a 16-piece order of Parmesan Bread Bites and an eight-piece order of Cinna Stix — in response to Hispanic customers’ requests for a more complete family meal. The chain will release its first Spanish-language TV commercial to help promote the deal.

“Customer feedback is a top priority for Domino’s, and we’re excited to offer a combination of a few favorite Domino’s products at a great price,” Patrick Doyle, Domino’s president and chief executive, said in a statement. “This is the first time we have introduced a Spanish-language advertising campaign around a national bundle offer, and we hope to help make the next family gathering even better by having something everyone can enjoy.”

The move toward Spanish-language advertising also is in keeping with industry marketing trends. Spanish is featured in new taglines this year from Taco Bell and Taco Cabana, and chains such as Burger King have made big investments in Spanish-language commercials and spokespeople. In addition, Pizza Patròn spurred controversy earlier this month with its “Pizza Por Favor” promotion that offered free pizzas to customers who ordered in Spanish.

For Domino’s part, Doyle stressed that although the Perfect Combo started in response to Hispanic customers’ requests for a more complete family meal, the deal would be available systemwide to satisfy all kinds of large-group settings. “Thanks to our Hispanic customers, anyone who orders from Domino’s will be able to enjoy this great offer just in time for the summer,” he said.

Domino’s said last week that it rang up more than $1 billion in annual sales via digital ordering and celebrated with a weeklong promotion of 50 percent off any pizza ordered via its online or mobile platforms. The new bundle would compete at the same $20 price point as rival Pizza Hut’s Big Dinner Box, a limited-time offer that ran late last year and gave way to the $10 Dinner Box this year.