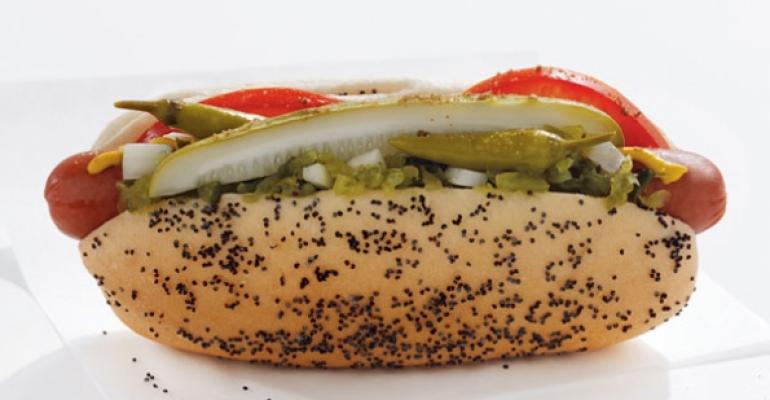 Whether they are topped with bacon or given an Asian twist, the hot dog is making comeback on restaurant menus in a variety of different way.

From food trucks to chains to chef-driven restaurants, hot dogs are experiencing a renaissance. And while well-done classics continue to thrive, many of the crowd-pleasers on menus across the U.S. are surpassing tradition to include inventive toppings and ingredients.

Nancy Kruse, menu trend analyst and president of The Kruse Company consultancy in Atlanta, says these haute dogs owe a debt to the burger upgrades that have occurred during past five years.

“The answer can be neatly summed up in three words: better-burger tailwind,” she said. “I think the extraordinary success of the new-age burger chain has caused chains and chefs to reconsider the hot dog and treat it the same way they do the burger, namely, as a carrier for a range of creative, premium toppings.”

“I think it's instructive that Richard Blais has jumped in,” noted Kruse, “and I suspect we'll see more migration from fine-dining chefs — just as we've seen with the burger phenomenon.”

In time for National Hot Dog Month, Nation's Restaurant News surveyed 25 leading vendors across the country, from chains to independents, to see what goes into their popular hot dogs. Take a look at the 10 top dogs that made the cut.

Ben’s Chili Bowl
All-Meat Chili Dog
This independent Washington, D.C.-based restaurant uses its secret chili recipe to top this best-selling hot dog. The dogs at this single-unit restaurant are grilled and topped with yellow mustard, onions and the eatery’s proprietary, spicy chili, which is handmade daily. The concoction is served in a steamed bun. The base of the chili recipe, which only three family members know, is a special chili powder blend from a spice company in Maryland. Price: $4.20.

Frank
Carolina Pork It
This single-unit restaurant in Austin, Texas, uses a 100-percent Vienna Beef dog in a natural casing for what it said has become a "buzz item" on its menu. The hot dog is split and filled with white American cheese, then wrapped in bacon. Next, it's flash-fried and served on a steamed bun with housemade pimento cheese and grilled horseradish slaw. Price: $6.35.

Puka Dog
Puka Dog
This single-unit restaurant on the Hawaiian island of Kauai is known for its unusual hot dog bun and proprietary condiments made from local ingredients. Customers can choose from a Polish sausage made of chicken, pork and beef, or a veggie dog. Toppings include a garlic-lemon sauce made from a secret recipe; lilikoi mustard; and fresh fruit relishes made of mango, pineapple, papaya, coconut, banana or star fruit. The item is served in French bread with a hole, or puka, in the center, instead of a traditional hot dog bun. Price: Starts at $6.75.

HD1
Kenturkey Dog
This single-unit independent operator based in Atlanta puts a twist on the classic Kentucky hot brown sandwich with this hot dog. An Italian sausage link made of turkey is topped with Mornay sauce, tomato-pimento marmalade, bacon and Parmesan crumbles. The sausage comes from a local producer, and the specialty toppings are made in-house. The hot dog is one of the restaurant’s most popular items. Price: $5.50.

Monster Dog
Seattle Style Hot Dog
Cream cheese is the star topping on hot dogs from this five-unit, Seattle-based chain. The dog itself can be either a nine-inch all-beef link, all-beef spicy hotlink or a veggie dog that is steamed. The hot dog is grilled and split down the middle, then topped with cream cheese and grilled onions. Diners can add an array of other condiments, including Sriracha sauce, spicy brown mustard, jalapenos or dill relish. Price: $5.

Senate Pub
Korean Hot Dog
This single-unit Cincinnati-based independent eatery blends Korean and American cuisines with this hot dog. A wood-grilled, all-beef hot dog is topped with red chile mayonnaise, braised beef short ribs, housemade kimchee, pickled cucumbers and sesame seeds, and is served on a brioche bun. The item is part of a line of hot dogs that the restaurant says has added style and variety to its menu. Price: $9.

Sonic Drive-In
Chicago Dog
This 3,500-unit quick-service chain has become known for its inventive hot dogs. The Chicago Dog, part of its Premium All-Beef Hot Dog lineup, is a rendition of the classic item. A grilled beef hot dog is topped with pickles, relish, tomatoes, sport peppers, chopped onions, celery salt and mustard, and is served in a poppy seed bun. Officials said the launch of the hot dog line, touted as a snack or a meal, drove sales across four dayparts. Suggested price: $1.99 to $2.49.

Super Duper Weenie
New Englander
This Fairfield, Conn.-based, single-unit hot dog specialist uses only local and seasonal ingredients for its housemade condiments, which include different varieties of relish, chili and sauce. The New Englander features sauerkraut, bacon, mustard, sweet relish and raw onion. Ingredients are sourced locally, when possible, from small vendors, and the dog itself is a blend of beef and pork in a light casing. Price: $3.75.

Wienerschnitzel
Angus Pastrami Dog
The 350-plus-unit hot dog chain based in Irvine, Calif., said its Angus Pastrami Dog, served in a pretzel bun, has been popular since day one. The item starts with a 100-percent Angus beef hot dog that's topped with pastrami, Swiss cheese, mustard and a pickle spear, and served in a pretzel bun. Officials said: “Our pastrami menu items have always done well, so when we combined it with our 100-percent Angus beef hot dog and our popular pretzel bun, it [made] for an unbeatable combination.” Price: $3.59.