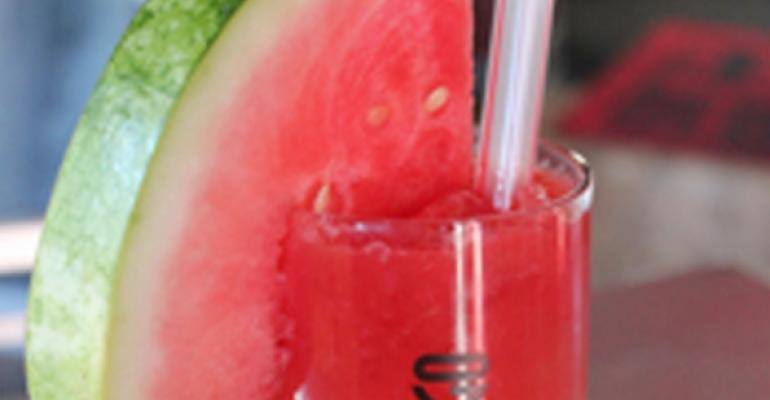 Renewed and intensified interest in beverages represents a big growth opportunity for restaurants, industry research firms have found, and many chains are eager to cater to this new demand.

While NPD recently found that beverage-only traffic rose for the 12 months ended this past June, Technomic also recently reported that specialty drinks, both alcoholic and nonalcoholic, held much of the potential for further growth.

According to Technomic’s “Beverage Consumer Trend Report,” 71 percent of consumers now purchase beverages away from home twice a week or more often, an increase from 66 percent in 2010.

Technomic also found that new and inventive beverages could be a major draw for customers, especially those among the younger demographic. Forty-seven percent of consumers between the ages of 18 and 24 reported that they would like to try new and unique beverages offered at restaurants, compared with only 29 percent of overall consumers.

“One of our busiest times of the day is between 9:30 and noon, when most restaurants have nobody in them,” he said.

Hash House A Go Go sells many specialty drinks like Kiwi Watermelon Lemonade, the Banana Latte, and a S’mores Mocha, all of which are meant to appeal to guests’ sense of sight as much as their sense of taste, Rees said.

Technomic analyzed menu data from the brands contained within its Top 500 limited-service restaurant list and found that development of such specialty coffee, tea and smoothies experienced robust growth over the past several years.

“Today’s foodservice consumers continue to base dining decisions on their perception of value,” Technomic executive vice president Darren Tristano said in a statement. “Innovative operators are creating value by crafting new and unique beverages, including specialty lemonades, handmade sodas and ‘mocktails’ that are uniquely flavorful, fresh and better-for-you options.”

Red Mango has combined coffee and smoothies in one of its newest drink offerings, Frozen Coffee Chillers. The lineup comes in four flavors: vanilla, caramel, mocha and natural coffee.

Smoothies are a popular platform for drink innovation, whether they include the new raspberry real-fruit smoothie at Burger King, or the Orange Julius-branded smoothies that Dairy Queen will roll out to enter the quick-service specialty beverage fray.

Seasonality presents another opportunity, as seen in Dunkin’ Donuts’ reprisal of pumpkin-flavored drinks for fall. The chain will sell not only the Pumpkin Coffee and Pumpkin Latte, but also pumpkin-flavored K-Cup single-serve drinks in retail stores.

In a separate report, the “2012 BeerTAB (Trends in Adult Beverage),” Technomic found that other opportunities for beverage sales at restaurants would be craft beer, cider and flavored malt beverages, as consumer trends for beer drinkers have become less favorable for traditional high-volume brands of domestic beer.

“The core consumers for the major domestic brands were among those most impacted by the recession, so their spending habits changed,” said Donna Hood Crecca, senior director of Technomic’s Adult Beverage Resource Group. “At the same time, taste preferences evolved, especially among younger consumers, and we saw beer drinkers increasingly seeking different styles and more complex or varied flavor profiles. Both trends affected the powerhouse categories and brands, which resulted in the overall decline.”

Red Robin’s new beverage lineup leverages the industry’s move toward specialty alcohol, as well as seasonality. The chain launched a spiked Oktoberfest Milkshake and the Honey Bourbon Lemonade to celebrate Oktoberfest. The milk shake combines ice cream, Samuel Adams Octoberfest draft, vanilla and caramel. The lemonade drink incorporates bourbon and agave nectar, and then is shaken and served with mint.