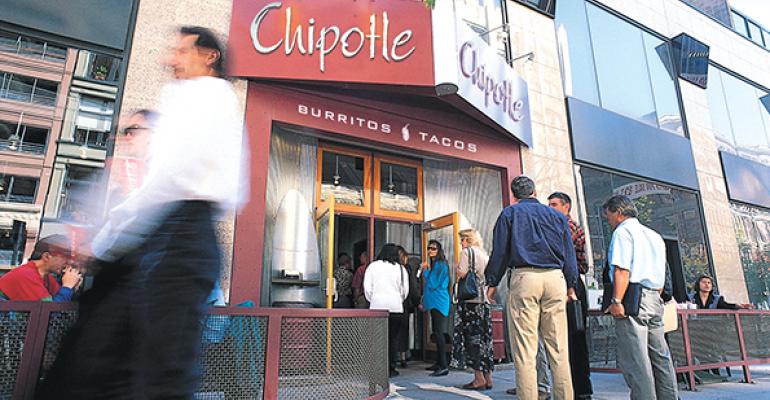 Postmates, an app-based delivery service that follows an Uber-style model of independent contractors who use their own vehicles, is Chipotle’s official delivery partner, executives of the Denver-based fast-casual operator said in a call with analysts Tuesday following its report of first-quarter earnings. The service will be available in markets where Postmates operates.

In the past, other third-party operators have attempted to deliver from Chipotle restaurants, but the company has attempted to shut them down, said Mark Crumpacker, Chipotle’s chief creative and development officer.

“We weren’t sure whether the quality was going to be sufficient or whether they were following our rules,” Crumpacker said.

Starbucks Corp., which plans to roll out delivery later this year, also chose Postmates as its third-party service.

The move comes as Chipotle works on improvements to its mobile ordering and payment options.

On Friday, Chipotle will launch an app for Apple Watch that will allow guests to order ahead. The chain is also exploring new systems for mobile payment, including the use of Apple Pay in restaurants and through the iOS app, and potentially Google Wallet within the Android app.

Jack Hartung, Chipotle’s chief financial officer, said online ordering, including catering and Burritos by the Box for larger groups, accounted for about 6.6 percent of sales during the first quarter, which was at or near an all-time peak.

“We think we have a lot of room to do a better job,” given that other brands are showing catering sales reaching to the 10-percent range, he said.

Chipotle tried to incorporate mobile payment into its existing app last year, but Crumpacker said the company was not happy with the way it was working, “particularly in light of the continually evolving landscape of mobile payment.”

A priority is making payment by smartphone available in restaurants before the end of the year, although the chain also plans to offer payment features through the mobile app.

This week the company relaunched its website to make it more mobile friendly.

Chipotle also plans to launch a new marketing campaign called “Collective Beauty” that aims to highlight the “whole, unprocessed ingredients” used to make Chipotle’s food, Crumpacker said. The campaign will go beyond the company’s longtime focus on Food With Integrity, and the brand’s responsibly raised meats, and organic and local produce.

A single burrito made by quick-service competitors might have 85 ingredients, including artificial preservatives and processing aids, Crumpacker said. Chipotle uses only 68 ingredients across its entire menu, mostly without preservatives or additives.

“Only our tortillas contain any preservatives or other additives, and we are diligently working to eliminate those,” Crumpacker said.

The marketing campaign will be rolled out in phases, with print, outdoor and radio elements currently running across 30 top markets. Another phase is scheduled for the fall, and a large online initiative will be launched over the summer.

Crumpacker said the campaign is designed to further differentiate Chipotle in a way that competitors can’t mimic.

“You can’t take all of this junk out of these other processed menu items in other fast-food companies,” he said. “They just can’t do it.”

Chipotle’s stock took a hammering Wednesday after its earnings report indicated a slowdown of its recent high-flying sales trends. By midday Wednesday, its stock price fell nearly 7 percent, to $645.50, and has decreased 4 percent year to date.

The 10.4-percent same-store sales increase included about 6.1-percent growth related to the menu price increases of 2014, and a 4.3-percent increase in traffic, along with a small increase in average check due to positive mix, larger group sales and catering.

Chipotle has increased its average unit volumes to $2.5 million for the first time, an increase of $500,000 per restaurant over the past three years.

Still, Steve Ells, Chipotle’s founder, chairman and co-CEO, said the chain’s results were somewhat hampered by harsh winter weather and an ongoing pork shortage after it suspended a supplier last year for failing to meet the company’s animal welfare standards.

Ells said the company has found a new supplier to help fill the gap, and pork may return to those restaurants that have been without the menu item in the coming months.

“If all goes as planned, we believe that we will be steadily increasing our supply throughout the third quarter and back in full supply during the fourth quarter,” he said.

Hartung said same-store sales in April so far appear to be on track for a high-single-digit increase.

The pork shortage is currently impacting sales by as much as 200 basis points, he said. Pork lovers have been reluctant to switch to other proteins, opting instead to wait out the shortage.

“Of course we’re disappointed, as our carnitas-loving customers that we have not been able to satisfy their craving, and we don’t love the fact that our sales have been impacted by the shortage. But we remain committed to our food integrity mission, and we are as confident as ever that we made the right decision to suspend a pork supplier based on our animal welfare protocols,” Hartung said.

Over the past few months, Chipotle has been rotating the pork shortage to a new market every six weeks or so, but that rolling blackout has caused confusion, Hartung said. Starting later this month, the chain will stop moving the pork shortage around and will serve carnitas in markets where the mix tends to be highest.

For the year, the company reiterated same-store sales projections in the low-to mid-single digit range, which doesn’t factor in any potential menu price increases related to beef or any sales recovery as the pork supply returns.

Food costs declined from 35 percent of revenue in the fourth quarter of 2014 to 33.9 percent in the first quarter of 2015, mainly because of lower dairy and avocado costs.

Beef commodity prices remain high, however, and, as previously warned, Chipotle expects to raise menu prices on steak and barbacoa this year, likely by the end of the third quarter, Hartung said. The increase will average between 4 percent and 6 percent.