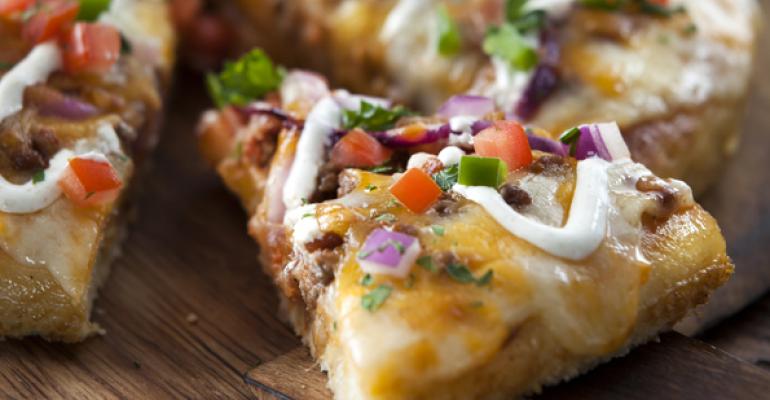 Chili’s Grill & Bar began this week its first nationwide marketing push of its new pizza platform, which has rolled out systemwide.

The pizzas are part of the “$6 Lunch Break Combo” and the “$20 Dinner for 2” television ads that began airing on Monday, a spokesman for Dallas-based parent Brinker International Inc. confirmed Tuesday.

Chili’s is promoting the new pizza on national TV, as well as online and through the Chili’s Email Club, according to Maureen Locus, a Brinker spokesperson.

In addition to the new advertising campaign, Chili’s is about to accelerate the rollout of its new flatbread platform, which Locus said would debut in May.

The company found consumer response to the new flatbread products “was extremely positive” in research locations, according to Chris O'Cull, senior restaurant analyst with KeyBanc Capital Markets Inc. Research, who reiterated his “buy” recommendation on Brinker International in a note Tuesday after a recent visit with the company’s management.

“In tests, the flatbreads appealed more to females than the pizza and will probably see preference shift from appetizers,” he added.

The two new menu platforms, made possible with the chain-wide “Kitchen of the Future” remodeling program, provide good margin benefits for Chili’s, O’Cull said. “We estimate there is only two to three ounces of protein on the product, so the cost is probably around 20 percent, on average, for the pizza and flatbread products,” he wrote.

O'Cull noted that compared to those of its peers, Chili's entrees tend to be more protein-centric with higher average food costs. He estimated the new items would have food costs in the 17-percent to 23-percent range, compared with an average in the mid-20 percent for the existing menu.

Chili's is also currently testing Sour Cream Chicken Enchiladas and a Tex-Mex Combo Plate. “The company's experience with On The Border should help it overcome operation, menu and sourcing challenges,” O’Cull said. “We expect the Mexican items will have higher gross margin than pizza.”

Brinker sold the 160-unit On The Border concept in March 2010 to Golden Gate Capital, a private-equity firm based in San Francisco.

Consumer sampling of new pizzas and flatbreads will likely lead to a shift in menu mix, O’Cull added, but he said reimaging of older units is aimed at increasing traffic.

“The reimaging program should be the primary driver of guest counts,” he said. “During the past 12 months, more than 200 restaurants have been remodeled (25 percent of the system), which we estimate has contributed roughly 80 basis points to the consolidated guest-count performance.”

Brinker has about 1,550 Chili’s units, as well as the casual-dining Maggiano’s Little Italy brand.