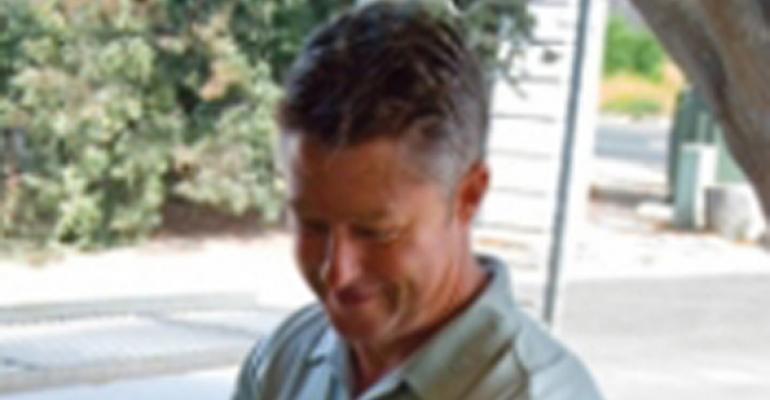 Chef Trey Foshee highlights vegetables at George's at the Cove

Trey Foshee is executive chef and partner of the mammoth George’s at the Cove, a three-story, three-concept beachside property in La Jolla, Calif.

The Ocean Terrace on the roof and George’s Bar on the second floor both serve casual-dining food — entrée salads, burgers, and thousands of fish tacos every week. On the ground floor, at California Modern, Foshee does his own take on the cuisine of San Diego County.

“I think one of the challenges of San Diego is we don’t have a cultural reference to really pull from,” Foshee said. "It’s one of the benefits of the West Coast, but it’s also one of the weaknesses.”

A common thread, he found, was the lifestyle people sought there — healthy living, a relaxed attitude and plenty of sunshine — so he reworked the menu at California Modern to suit that. Among the menu changes Foshee has made was the development of a separate vegetarian menu.

He also recently introduced TBL3 — pronounced “table three” — a $170 14- to 16-course tasting menu that's available only on Tuesday, Wednesday and Thursday, and he’s also planning on rolling out a vegetarian tasting menu.

Why did you decide to do a vegetarian tasting menu?

We were doing these things called “side tables,” which were exploratory dinners at our communal table. We’d take a topic and really kind of delve into it. The table holds 22, and one of those people would be kind of an expert in the field, but nobody would know who it was. So it wasn’t like you were coming to dinner to meet somebody, it was like you were sitting at this communal table and you just happened to be sitting with Tom Chino [of Chino Farms] or somebody that was an expert in San Diego seafood history or something like that, just to promote conversation. I wanted people to not only have a meal but to learn something and leave knowing a little bit more about what that topic was.

The one that sold out the fastest was the vegetarian one. I was talking to a couple that was probably in their early 40s, obviously well to do. They ordered a nice bottle of wine. They were kind of your quintessential restaurant couple. They said, ‘We’re super excited to be here, because we’re vegetarians. We love to go out to dinner; we love to dine, but we’re always excluded from any kind of special occasion — any kind of guest chef dinner, anything like that.’ And I thought, 'That’s really true.' Here we are, this industry that really alienates a pretty substantial percentage of the population that either thinks of themselves as vegetarian or are vegetarian.

A lot of people here don’t eat much meat, for good reason: To get good quality meat is difficult for the average person, so they just choose not to eat it if they can’t get their hands on good stuff. I thought, if there’s anybody in town who should be catering to this group of people, it’s us, and we’re not. I felt kind of bad about that.

So I went home and I took our menu apart and all the preparations that were either vegetarian or could easily be made vegetarian. I came up with six appetizers and three entrees, so we just started doing that as a separate menu.

Did making a separate vegetarian menu affect how those dishes sold?

No, not really. What we see is people ordering a vegetarian entrée and octopus or something else that’s not vegetarian as an appetizer. I discovered that a lot of people, especially when they’re going to an upper-end restaurant, say they’re vegetarian as kind of an excuse to get out of the experience. They have this image that the meal’s going to be heavy — that it’s going to be high calorie. But [at California Modern] they can come in and splurge on a rich appetizer and then have a vegetarian entrée.

Tell me about TBL3.

It’s a no-holds-barred chef's tasting menu that’s only available a couple nights a week. It’s actually been very popular; we’ve gotten some good write-ups on it. And it’s not common in San Diego.

We’re not going to get anything out of it from a revenue-generating perspective, but it’s a lot of fun, and it’s a creative vehicle.

When you’re doing an à la carte menu and you put things on that you like but that don’t sell so well, you’ve got to pull them off. With the tasting menu you don’t have those issues. You can do whatever you want. So we just started doing it, and it’s kind of taken off a little bit. We’re doing between six and eight a month, which is really good, and it’s influencing everything we do.

Does the tasting menu have a different food cost?

Because of all the good produce in season?

Yeah. We do a carrot dish that’s based on a dish I cooked at home. We did a roast beef, and I just did a mirepoix [carrots, celery and onions] underneath. It was a really nice piece of meat, and as we were eating it, I was thinking, 'The meat is delicious, but the vegetables are more delicious because they taste of themselves but are also influenced by the meat.' So we started doing a dish that was based on roasted mirepoix. So we started roasting the carrots and dry-aging beef fat. We’ve done various variations on that.

There’s usually between four and six pretty pure vegetable courses. We have a fair amount of return customers and we understand how they react with certain dishes.

We have a couple that has a fair amount of property in Rancho Santa Fe. They keep bees, and they gave us some of their honey, so the last meal we did we included their honey in the menu. They really got a kick out of that.

It’s more than a meal opportunity, it’s a relationship, and when it becomes a service of the restaurant, it’s not a relationship anymore.