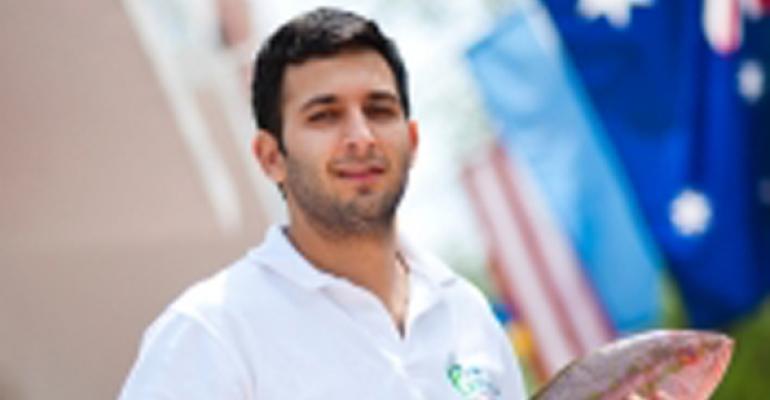 He also discusses his recently opened fast-casual restaurant, My Ceviche, with NRN

Colombia native Sam Gorenstein moved with his family to Miami when he was 14 years old and was soon captivated by the back-of-the-house life. After graduating from Johnson & Wales University’s Miami campus, he moved to New York, where he mostly worked under Laurent Tourondel, founder of the BLT restaurants.

He then returned to Miami, and after a brief stint as executive chef at a venture that failed to thrive, he was hired by Michael Schwartz as sous chef at Michael’s Genuine Food & Drink. Soon after that, Tourondel hired him away to be executive chef of BLT Steak in Miami. He was 23 years old.

Now he’s the chef and owner of My Ceviche, a fast-casual takeout joint in Miami Beach, Fla., that has won him acclaim from his local peers. He recently visited New York and discussed his concept and the local seafood scene with Nation’s Restaurant News.

Did you offer a lot of seafood specials at BLT Steak?

Yes. It was very impressive to see the sales ratio of fish to meat in that restaurant, but it is just two steps from the ocean.

I tried to take advantage of local, lesser-known fish. People are used to the mahi mahi, the grouper, the snapper, but there’s so much more beyond that. And now people are taking more advantage of that.

Like cobia, which you get from the Keys a lot during winter. It’s also called lemon fish. It’s very good for sports fishing. If you fillet it, the loin looks very similar to hamachi. It has that nice red bloodline and a lot of intramuscular fat, but it’s as dense as a swordfish. You want to cook it just medium-medium rare. It’s excellent.

There are also pumpkin swordfish, which preys a lot on shrimp and other shellfish, so it’s bright orange. There are Spanish mackerel, kingfish, yellow jack, and hog snappers during lobster season.

It looks like a dog, but the meat is pure white, very soft and it has a very sweet taste. For ceviche and other raw preparations it’s excellent, and it’s a byproduct of the spiny lobster catch. They prey on lobsters, so they get caught in the lobster traps.

Rock shrimp from the Gulf is very good, and deepwater tilefish. There are a lot of fish that people just aren’t familiar with.

What’s happening now is grouper season is closed. You used to be able to catch it commercially all year round, now you can’t during spawning season. Same thing with yellowtail snapper — it’s way overfished.

Tell me about your restaurant, My Ceviche.

I grew up in a coastal city in Colombia, and you see cevicherias everywhere. In Miami, the ocean is next to you but you can’t find a good ceviche. So my partner and I opened a ceviche place, but we didn’t want it to have a specific ethnicity. We wanted it to have a little bit of everything that I feel a ceviche should be. My partner has a stone crab business, so we also offer stone crab claws. We also have tacos, using the same protein as the ceviche, but grilled, and we have salads.

It’s nothing that I’m used to doing, because I always did fine dining and a different gastronomy. This is more on the fast-casual side of the business.

Eighteen dollars, but you get a good a ceviche. The portions are very generous.

How does the menu work?

We have three proteins: shrimp, fish and octopus. The fish is anything white fleshed I can get local — snapper, grouper, yellow jack. If I can get shrimp from the Keys or the Gulf [of Mexico] I do, though sometimes it’s a little hard. Octopus I get sometimes from northern Florida, or Mexico.

It’s a very fast-casual approach. Everything is fresh, made in-house. We have six different styles of ceviche, and then you can combine them with the three proteins we have in any combination that you want.

So it’s a Chipotle-type system?

Correct. We wanted to be a little bit playful with our customers and let them choose what they want.

What are the six different styles?

We have Aji Amarillo, which is a Peruvian style, with a little bit of ginger, lemon juice, lime juice, orange juice.

We have traditional: straight up lime juice, a little bit of jalapeños, white onions.

We have a Caribeno, Caribbean style, which is more from my hometown. It’s grated tomatoes with ketchup and chiles, cilantro, lime juice. We have a Crema de Rocotto, which is also Peruvian, with rocotto peppers in a creamy emulsion. We have an Asian one, which is kind of like a soy-citrus.

And we have a coconut one with a little bit of coconut water, coconut milk and ginger.

Where is that one from?

Ceviche’s a very simple preparation and I feel very strongly that there’s going to be a great boom around it. You’re seeing it popping up in a lot of restaurants. It’s a great way to use the whole fish — the collar, cheek, little scraps from whatever you’re portioning.

People have had the understanding that seafood is expensive. And it’s not as affordable as chicken breast or ground beef, but it doesn’t have to be as expensive as it is in the majority of restaurants. You can still serve a great product, fresh, keeping your wallet in a safe place, and we’re hitting that niche.

Do you plan to open more locations?

We’ve only been in operation for six months, and the concept needs to evolve a little bit more as we learn from our customers, and then the restaurant will grow.