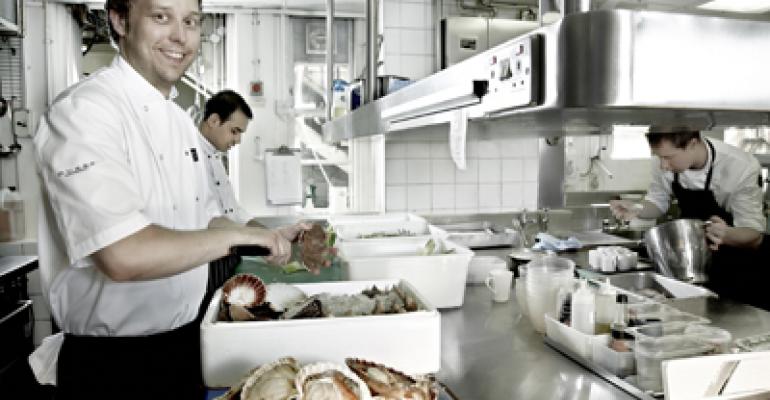 Nigel Mendham has spent the past 20 years cooking throughout England, working his way up the ranks and learning classical French cooking. He was most recently the head chef at the Samling Hotel in Windermere, where he earned a Michelin star.

Last year he moved to London to develop Thirty-Six by Nigel Mendham, a 36-seat fine-dining restaurant at the 100-year-old Dukes London hotel, where James Bond creator Ian Fleming developed his understanding of Martinis, among other things.

Mendham discussed the new restaurant, some British ingredients he enjoys working with, and triple-cooked fries, with Nation’s Restaurant News.

Tell me about your cuisine.

I like to take classical food and put my take on it. I don’t do sous vide, but everything else along those lines. Sous vide’s my next step. I’m getting to the stage now where I could bring it to my cooking, especially for fish. It doesn’t work for everything. Some people, friends of mine, tried it for salt marsh lamb, and it just doesn’t work.

I get mine from up north. It lives on the marshes, eats the sea grass and that sort of thing.

Does it taste saltier than other lamb?

Yeah it does. It has a subtle taste to it. You want to get a bit of caramelization on it, and let it rest, but I know guys who have tried sous-viding it and it just comes out tough as old boots.

Dukes Bar is where Ian Fleming came up with James Bond’s “shaken-not-stirred” order for Martinis, but Martinis are actually supposed to be stirred.

When I’m allowed in the bar I have the Vesper [the Martini variant that James Bond orders shaken, not stirred] but he doesn’t shake it.

Interesting. Are you offering anything special for the upcoming James Bond film [Skyfall, debuting in November]?

We’re calling it a James Bond tasting menu. It’s classical stuff like scrambled duck egg served in the shell with caviar and blinis, lobster Russian salad with its own sauce, and for the main course we’re doing roast grouse with traditional garnish, but with a bit of a twist on it.

You have to hang grouse for a while, right?

Not very long — four days or so — or they start to smell really bad.

I thought that was the goal.

I don’t take them that far.

How do you cook grouse?

I roast them whole, then take the legs off, finish them in the oven and keep the crown separate, so there’s a bit of pinkness to it. [I serve it with a] bit of bread sauce and watercress.

What is bread sauce?

Milk infused with a [clove-]studded onion, bay leaf, then add bread crumbs, nutmeg, white pepper. You put enough bread in to thicken it. It has a similar consistency to mayonnaise.

What else are you cooking lately?

We’re looking at venison with celeriac, blackberries, game jus. We take the loin, but we take the shins [shank] as well. We call it osso buco because it’s the shin, but it’s not actually served on the bone like classic osso buco. We take the meat down and wrap it in cabbage and then we use the sauce from the braising liquor to finish the dish off.

Can you serve wild venison in restaurants in the U.K.? The U.S. Department of Agriculture doesn’t allow restaurants to serve anything that’s been shot.

Yeah, we get ours down from Scotland. It’s not a problem. We’re in the season now of normal game, so it’s partridge, pheasant, and they’re all shot. We get them in the restaurant with shot in them and we have to be careful and take the shot out, or you just warn the customer that it’s been shot and you may get a bullet.

Is there anything in particular that’s trendy in London restaurants?

It seems to be more simple pairings, like “bubble dogs” which is Champagne and hot dogs. You get different sausages like wild boar, pork, venison, with Champagne. And burger and lobster, which has been out for a while. It’s just a hamburger and a piece of lobster. Those are the sorts of trends that are out there, but I’m at a fine-dining restaurant in a hotel, I’d have to change the whole concept to do that. The only thing that we have that’s outside fine dining is a steak menu. It’s a good, aged filet and a rib eye with triple-cooked chips [French fries]. The filet has watercress purée, a beef sauce and some heritage sautéed potatoes.

What are triple-cooked chips?