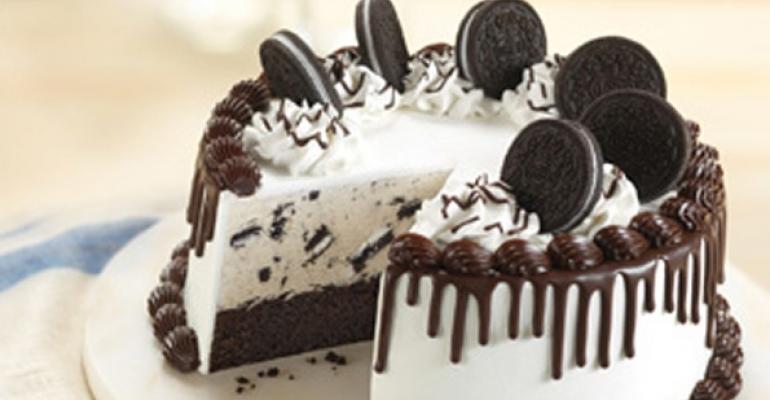 A 100-year-old cookie has brought new life to a number of summer dessert and treat offerings, and has also put a spotlight on how a brand-name ingredient can heighten interest in menu offerings.

Kraft Foods’ crème-filled Oreo turned 100 in March, and restaurant chains from Dunkin’ Donuts to The Cheesecake Factory have found ways to celebrate the cookie centennial in menu offerings.

Dunkin’ Donuts is offering the Oreo in its Coolatta frozen drinks and several doughnuts. And on July 31, the casual-dining Cheesecake Factory chain will take the wraps off its new Oreo Dream Extreme Cheesecake, which will feature a layer of vanilla cheesecake studded with Oreo cookies, layers of fudge cake, and Oreo cookie mousse, all topped with milk chocolate icing and a large cookie wafer.

While Oreo has garnered a lot of attention because of its anniversary, other confectionary brands have also appeared in chains' dessert offerings. Hershey’s and Ghirardelli chocolates, Hostess Ding Dongs, Sour Patch Kids, Reese’s Peanut Butter Cups, Butterfinger, Snickers, Heath and M&Ms all are playing supporting roles in restaurant treats.

Nancy Kruse, president of the Atlanta-based menu consultancy The Kruse Co., said, “Ingredients like these offer a nice promotional hook based on their brand recognition, and, especially, their image. They're all fun products — the kind that make patrons smile. And the fact that most are cold makes them summertime naturals.

“I don't see any downside. In fact, I think there's tremendous upside potential for the marriage of two proven brands to grab consumer attention and drive traffic,” Kruse said.

And getting on the “brand-wagon” doesn’t have to be complicated. The five-unit Seattle-based MOD Pizza, for example, offers a simple stack of foil-wrapped Hostess Ding Dongs at the cash register. Customers in the know can ask for one of the frozen Ding Dongs that MOD keeps on hand in the freezer.

Ally Svenson, co-founder of MOD, said the concept has offered them since the opening the first unit in 2008.

"When we launched, we were very focused on offering ‘simple stuff for complex times’ and put a bunch of good old Ding Dongs on our counter,” Svenson said.

“It was for a bit of fun at the time, and we wanted a nostalgic feeling, reminding people of simpler times,” she said. “Surprising even us, the Ding Dongs really resonated with our customers, putting lots of smiles on many faces. And they really sell, too!”

While dairy-treat chains like Dairy Queen, Sonic Drive-In and Cold Stone Creamery have offered mix-ins of crumbled branded candies, other operators have subtly incorporated brands into their offers.

For example, Pizza Hut has offered its Hershey’s Chocolate Dunkers option since October 2008. BJ’s Restaurants has used Ghirardelli chocolate in its signature Pizookie and ice creams, and garnishes many of its dessert with a branded square of Ghirardelli as well.