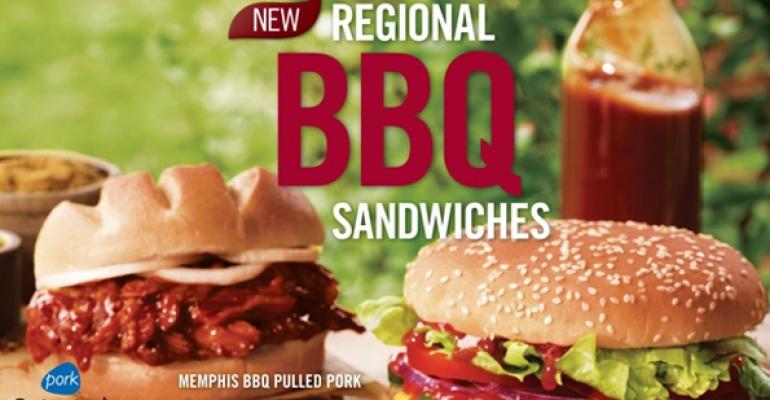 Burger King on Wednesday is scheduled to launch a new summer menu of limited-time offers, from new barbecue sandwiches inspired by regional favorites in Memphis, the Carolinas and Texas to an ice cream sundae studded with a thick-cut slice of bacon.

The move follows the Miami-based chain’s largest menu overhaul in its history in April, which included a line of premium salads, snack wrap sandwiches, smoothies, chicken strips and frappe drinks.

“Barbecues are synonymous with summer; we gather together with family and friends to eat great food, and now Burger King offers guests a chance to sit back and let us take over the grilling,” said Alex Macedo, Burger King Corp.’s senior vice president, North America marketing, in a statement.

The Texas BBQ Chicken sandwich can be made with either grilled or fried chicken breast and includes American cheese, jalapeno slices, onion, tomato, lettuce and Bull’s-Eye Texas Style BBQ sauce on an artisan bun for a recommended $4.79.

Frozen Lemonade, available in 12-, 16-, and 20-oz. servings, is a frozen beverage available in real lemon and strawberry lemonade flavors with prices starting at $1.99.

Sweet Potato Fries are now a sweet potato alternative to the classic Burger King fries, with prices starting at $1.89.

The Bacon Sundae was tested in Nashville, Tenn., and was a hit. It includes vanilla soft-serve ice cream drizzled with hot fudge and caramel, topped with bacon crumbles, and then garnished with a thick-cut slab of hardwood-smoked bacon. Prices start at $2.49.

Burger King, which was taken private in October 2010 by private equity firm 3G Capital Management, is in the process of becoming a public company again in a deal announced in April with U.K.-based Justice Holdings, which agreed to take a 29-percent stake in the burger chain for $1.4 billion. Once the deal closes, which is scheduled this month, Burger King will begin trading on the New York Stock Exchange.