Kevin Matuszak will be flown out to Applebee&#39;s headquarters after creating a social media firestorm with the hastag #HireKevin.

A 25-year-old Philadelphia man who hit up Applebee’s Facebook page for a job has snagged a face-to-face interview at the casual-dining chain’s headquarters in January.

Kevin Matuszak posted his request Nov. 26, and it ignited a small social-media firestorm on such platforms as Facebook, Twitter and YouTube with the attached hashtag #HireKevin. 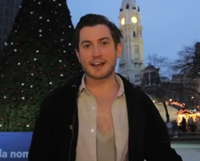 “We’re going to fly him out to Kansas City after Jan. 1,” said Dan Smith, spokesman for Applebee’s parent Dine Equity Inc. The campaign has drawn mainstream website and television attention as well.

“The ad was for their new Brew Pub Pretzels, and it was showing a stat that Philadelphians eat more pretzels than anywhere else in the country,” he said. “I, being a Philadelphian, took notice of that, and then 'Hi, can I work for you?’ began.”

Matuszak added that he was impressed with the interaction of a big, otherwise faceless brand. “What's awesome about Applebee's social media pages is that they are actuallysocial,” he said. “Not many brands respond to their consumers as well as Applebee's continues to do. The way they go about handling social media is a huge bright spot for the brand, and I think that it puts them ahead of many other brands in their competitive field."

Smith of DineEquity added that Applebee’s was “engaged from the beginning. I think it speaks our social success, which has been based on engaging our fan base early and often.”

As for Matuszak, he said he is looking forward to the interview and hopes that it leads to a spokesman-type role. “My parents always thought that I would make a good personality!” he said.

How the #HireKevin campaign went viral

Here's a look at how the #HireKevin campaign played out over social media: