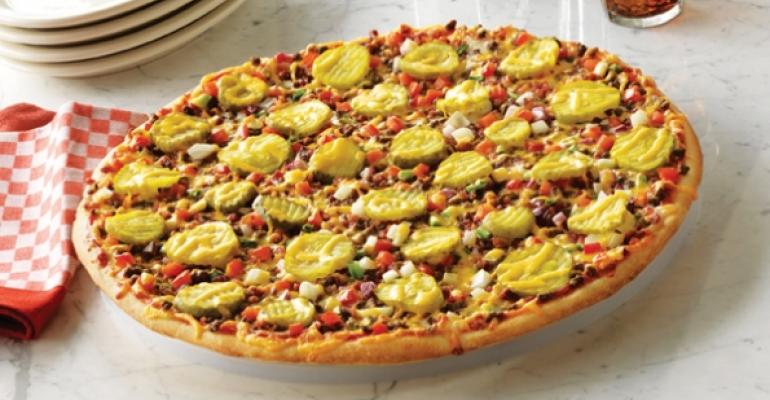 That blinding light isn’t a reflection of the sun; it’s the collective smile power of happy pizza makers, who started 2013 with good news. According to retail-grocery researcher IBISWorld, the supermarket frozen-pizza category has seen revenues fall nearly 9 percent over the past two years as consumers, seeking freshness, authenticity and perhaps a little adventure, abandoned freezer cases and returned to pizza parlors. Operators have welcomed them with a plethora of truly creative pies to meet those demands.

Pizza ranks high as a comfort food, and many restaurateurs have doubled down on the comfort quotient with familiar but totally unexpected toppings. Attention grabbers like Mac ‘N Cheese Pizza at Whitewater, Wis.-based Toppers Pizza or the Spaghetti & Meatball Pizza special at Dedham, Mass.-based Papa Gino’s deliver straightforward renditions of the pasta classics on a pizza crust, a combination that offers a real wow factor. Pizza is also the perfect carrier for toppings more typically found on sandwiches. Chicago-based Rosati’s featured a Chili Cheese Dog option that sported a true Chicago hot dog on top. Pizza Inn, which frequently thinks outside the pizza box, ran a Grilled Cheese Pizza promotion, and Papa Murphy’s, equally audacious in the R&D department, introduced a Bacon Cheeseburger Pizza in which the pizza sauce was replaced with, yes, ketchup and mustard. The clever Cuban Pie at Pie Five Pizza Co. in Dallas approximates the classic sandwich with its toppings of pork, ham and mustard sauce. The requisite pickles are diced and sprinkled on top.

They’re fast.  The breakout restaurant segment over the past two years or so has been the fast-casual pizza category, which allows for both customization and speedy service. It can be tough to keep the proliferating pie makers straight as new entries stream into the market regularly, and many are working hard to stand out from the pizza pack. Crust is crucial at operations like Blaze Pizza in Irvine, Calif., which promises an extra crispy crust that’s fast-fired over an open flame in just 120 seconds, or Project Pie in Las Vegas, which boasts an 800-degree oven to bake its thin-and-crispy crusts. Naked Pizza, headquartered in New Orleans, touts its 10-grain crust that includes both prebiotic and probiotic ingredients.

While virtually all of these operations chase Chipotle’s success by allowing patrons to pick and choose their own ingredients, they also offer signature pies. At Pie Five it’s Chicken Carbonara with creamy Alfredo sauce, while at Blaze the Green Stripe is finished with a pesto drizzle. Uncle Maddio’s Pizza Joint in Atlanta highlights pesto, too, in its Portobello Pesto Pizza. The Sienna at Seattle’s MOD Pizza tempts taste buds with fresh rosemary and red onions.

They’re authentic. While the quick-casual pizza segment is undeniably hot, the Neapolitan pizza category is positively sizzling. The two aren’t mutually exclusive, but the latter emphasizes direct lineage with the true pies of Naples, the product’s birthplace. The iconic Margherita pizza is nudging aside better burgers as the dining cognoscenti’s artisanal dish of choice. Elegant and simple, it contains just three toppings: tomatoes, mozzarella cheese and basil. Those toppings — a nod to the red, white and green Italian flag — can be found on menus like that of trendy Garage Bar in Louisville, Ky., where the mozzarella cheese is premium fior di latte, the tomatoes are milled and the basil is homegrown. The category is so hot that it has even given rise to dueling certifications. Associazione Verace Pizza Napoletana promises a real Neapolitan pizza; its pies meet very stringent standards and can be found at spots like Stuzzi in Richmond, Va. This is not to be confused with the Associazione Pizzaiouli Napoletani, which is an organization of Neapolitan pizza makers, one of whom operates  Kesté Pizza & Vino in New York.

Looking ahead, expect more emphasis on authentic ingredients. At Pizzeria Toro in Raleigh, N.C., a white pizza is topped with lemons and olives, much like pizzas in the Puglia region of Italy. And in Atlanta, La Tagliatella, the first domestic outpost of a European chain, offers a luscious Melanzana Pizza. It’s a totally toothsome creation topped with thinly sliced fried eggplant and drizzled with honey and balsamic vinegar.