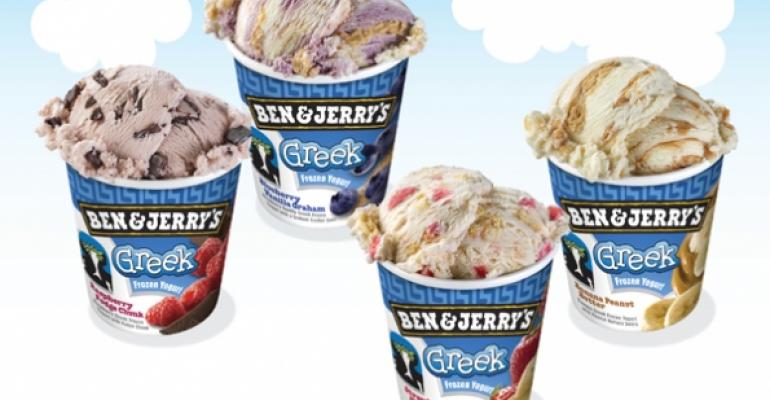 For natives of Chicago or Detroit, which have large Greek-American populations, the current fuss over Greek cuisine is a little bemusing. The presence of Greek restaurants and groceries in those cities has made the foods and flavors as accessible and comforting as Italian pasta or pizza. The good news for the rest of the country is that, at long last, Greek food is moving out from under the marketable but nebulous “Mediterranean” umbrella and getting its day in the sun.

Greek yogurt has taken the country by storm. Tangy and protein-rich Greek yogurt has grown in popularity at supermarkets, where Nielsen reported that sales have increased in excess of 100 percent per year over the past three years. Greek yogurt is strained to remove the whey, making it thicker in texture and a natural carrier for toppings. Burlington, Vt.-based Ben & Jerry’s takes the sweet route with Raspberry Fudge Chunk and Banana Peanut Butter varieties. Pinkberry patrons can enjoy sweet treats like the Chocolate Berry option as well as savory selections. Building on a base of plain Greek yogurt, one choice at the Los Angeles-based chain offers a bit of sweet heat with a combination of sliced cucumbers, sea salt, red and yellow peppers, and a drizzle of honey and chili powder. Another mixes tomatoes and olives with pesto and sea salt. Salt Lake City-based TCBY and New York’s 16 Handles, meanwhile, have taken the traditional route and simply pair the product with honey.

Tzatziki is a sauce that starts with Greek yogurt and features additions like cucumber, garlic, olive oil, vinegar and fresh herbs like dill or mint. It’s making an appearance in dishes like Calabasas Hills, Calif.-based The Cheesecake Factory’s Santorini Farro Salad. Tzatziki is also on the Lamburger at Flip Burger Boutique in Atlanta and on The Nicola at Dirty Frank’s Hot Dog Palace in Columbus, Ohio.

Feta cheese is another quintessentially Greek product. Traditional Feta is made primarily from sheep or goat milk, though domestic feta uses cow milk. Because it’s brined, it develops a unique texture and pungency that adds bold flavor. It has frequently appeared on salads at chains like St. Louis-based Panera Bread and Irvine, Calif.-based Yard House. It is an optional topping at Los Angeles’ The Counter, a better-burger chain, and at Scottsdale, Ariz.-based Wildflower Bread Company it’s part of the Chicken Pesto & Feta sandwich. Uno Chicago Grill, based in Boston, offers an Eggplant, Spinach & Feta Half Pizza on the Small Plates menu, while diners at Laguna Beach, Calif.-based Zpizza can enjoy an entire pie topped with feta, mozzarella, red onions, Greek olives, tomatoes and oregano.

Lamb is the protein of choice on Greek menus, but for many American diners it remains exotic and unfamiliar. The recent spate of lamb burgers has offered a perfect point of introduction, as with The Greek Burger at BGR The Burger Joint, based in Lansdowne, Va., which marries freshly ground leg of lamb with mint, garlic, tzatziki and feta. Gyro, the spicy minced lamb on a spit, is found in pita wraps at Little Greek of Brandon, Fla., and Daphne’s California Greek of Carlsbad, Calif., but it also appeared in a Gyros Sub limited-time offer at Miami Subs Grill, based in Miami, last spring. And gyro meets burger in the appropriately named Gyro Burger, which features a blend of ground leg and top round of lamb, along with a bit of ground beef chuck roast, available at Fat Guy’s Burger Bar in Tulsa, Okla.

Looking ahead, more diners will learn to love the cuisine as Greek-focused chains expand. High-profile chef advocates like Michael Symon and Cat Cora will use their television presence to spread the word. And a new generation of winemakers working to elevate the image of Greek wine is likely to aid the cause, as well.

Nancy Kruse, president of the Kruse Company, is a menu trends analyst based in Atlanta. You can follow her food blog, exclusively on LinkedIn.