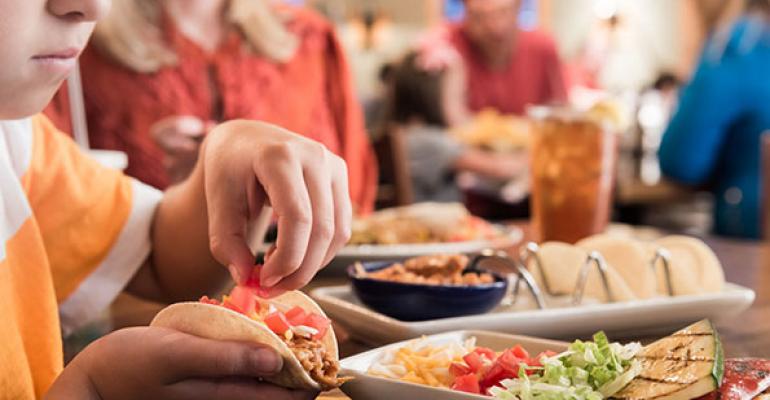 On The Border
<p>On The Border partnered with Kids LiveWell and the Healthy Dining Finder programs to develop its kid&rsquo;s menu.</p>
Consumer Trends

Restaurant chains have been continuously overhauling and upgrading their kids’ menus, expanding the appeal with a greater variety of healthful menu options and more attractive side dishes and packaging.

Dallas-based Which Wich Superior Sandwiches will unveil a new kids’ meal program on June 27. The limited-service brand is joined by other chains as varied as casual-dining On The Border, limited-service Roti Mediterranean Grill, fast-casual Pei Wei and Noodles & Co., and theater-dining Alamo Drafthouse Cinema.

“The world is getting more kid-friendly,” said Courtney Sinelli, the mother of two girls and wife of Which Wich founder Jeff Sinelli. Late last year, Sinelli convened a group of mothers culled from Which Wich franchisees and corporate headquarters staff to craft a new kids’ menu.

The new offerings allow children to mark up Which Wich’s traditional brown ordering bag, but they will choose from a list of sandwiches created specifically for them, including: Peanut Butter & Jelly (PB&J); Super Awesome Grilled Cheese, featuring multiple varieties of cheese on toasted bread; Cheese Pizzawich; Kidswich; and Rollups, a meat-and-cheese offering without bread, designed for smaller children or those with gluten sensitivity.

Which Wich will serve the items in a three-compartment “bento box” with a lid, branded sticker sheet and a token for M&M’s from Which Wich’s signature yellow candy dispenser.

“My first idea came from one of our daughters not eating bread,” Courtney Sinelli explained in an interview during the menu test. “I think that’s really common. That’s when we put a protein roll-up on the menu.”

“We looked at all sorts of options,” Sinelli said. “We wanted to offer something healthy and make the parents happy. But we also wanted to make it fun for kids with great food and selections. We wanted it to be healthy, creative and fun.”

The Which Wich think tank also decided on healthful side items such as sliced apples and carrots with or without ranch dipping sauce as possible substitutes for the typical side of chips.

Along with Which Wich, many other restaurant brands are being acknowledged for improving the healthfulness of their kids’ menus.

Results of a Tufts University research study released in April found that 72 percent of fast-food meals and 63 percent of full-service meals contained 600 calories or less, meaning they met recommended calorie guidelines for children.

“Everyone has a role to play in providing healthier meals for kids,” said Christina Economos, vice chairman and director of ChildObesity180 at Tufts University, in a statement. “Restaurants can make healthy, appealing options more prevalent and prominent. Parents can educate and guide their children toward healthy choices, and speak up to demand healthy meals where they don’t exist.”

Other restaurant brands are tapping into more healthful kids’ meal as well.

• In March, Scottsdale, Ariz.-based Pei Wei Asian Diner began testing customizable menu options to satisfy children’s tastes and nutritional needs. The company partnered the with the Boys and Girls Club of Arizona to let kids weigh in on its new Kid’s Wei menu offerings, which include such items as Honey Seared Chicken, Teriyaki Chicken, Sweet & Sour Chicken, Sesame Chicken and Panko-Crusted Chicken Strips. The new meals all include a fruit or vegetable side.

Priced at around $5, the new kids’ meal option allows young diners to choose from four entrées, along with a drink and sides such as broccoli, carrots, fruit, applesauce and a Kids Crispy, a housemade version of a Rice Krispies treat. Noodles & Company partnered with the National Restaurant Association’s Kids LiveWell program to design the options with nutrition experts.

In addition to the meal options, Noodles & Company offers kids an interactive placemat with brain teasers, puzzles and games based on principles of STEAM, a science, technology, engineering, art and math emphasis used in a growing number of schools.

Brian Campbell, On The Border’s chef and director of culinary research and development, said in a statement: "What kid wouldn't love being 'the chef' and building their own tacos just exactly the way they want them? It's like having permission to play with your food."

The company partnered with Kids LiveWell and the Healthy Dining Finder programs to develop the menu.

• Chicago-based Roti Modern Mediterranean, a fast-casual concept, put a Mediterranean spin on its kids’ menu, offering a $4 Chicken kabob on a whole-wheat pita with rice and a $4 Chicken Rice Plate. Both are served with seasonal fruit.

• Even the schools-out summer movie season is getting a kids’ meal overhaul. Austin, Texas-based Alamo Drafthouse Cinema has added a kids’ menu at some locations with such items as turkey meatball sliders, blueberry pancakes, cereal milkshakes and caramel apple fizz soda. The summer movie program entices parents with such movies as “Charlie and the Chocolate Factory” and “The Karate Kid.”