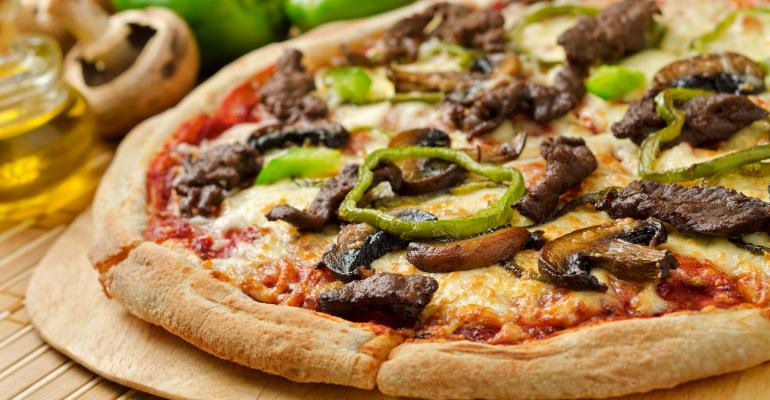 Banana and bacon pizza? How about cream cheese and chicken? Those are just two of the international pizza varieties — from South Africa and Brazil, respectively — described in a report called “Pizza Around the World” published last year by Chicago-based research firm Datassential.

The report highlights the myriad possibilities for pizza creation, and notes that in 2015 major restaurant chains in the U.S. added more than 110 new pizza varieties to their menus or as limited time offers.

“We are definitely seeing restaurants getting far more experimental with their pizza,” he says. “With over one-third of restaurants offering a pizza on the menu, you have to do a lot to stand out.”

Among the up-and-coming varieties that have seen increased penetration are Philly cheesesteak pizzas, along with Greek and Thai varieties.

According to research from AdvancePierre® Foods, a supplier of Philly-style steak and other products, pizza toppings are the second most common use for Philly-style beef among quick service operators, after Philly cheesesteaks. More than one-third — 34 percent — of operators who use Philly-style steak feature it on pizzas, the company’s research has found.

For Tubby’s Sub Shops, the Clinton Township, Michigan-based sandwich chain, offering a Philly cheesesteak pizza was a natural choice to feature on the menu of its first pizza restaurant when it opened last year, says Brad Russell, director of marketing at Tubby’s.

“Our most popular sub is a steak and cheese, so it made sense to try to do a pizza version,” he says.

Steak can provide operators with an affordable, high quality pizza topping, says Darren Gray, senior director of menu and culinary innovation at Marco’s Pizza, based in Toledo, Ohio. By controlling portion sizes, operators can incorporate steak to elevate the cachet of their menus while preserving margins.

Marco’s has in the past menued a Philly cheesesteak pizza as an LTO, which laid the foundation for the creation of the chain’s highly successful Steak Asiago Pizza, another LTO that ran last summer.

The Steak Asiago Pizza was made with a pre-grilled fajita beef product, with olive oil, garlic, spinach and mushrooms, topped with Asiago and Parmesan cheeses.

“In my years of doing this I have never had an LTO received with better approval than that one,” says Gray. “It was remarkable, and I think the steak aspect had a lot to do with that.”

“With the success of that pizza, we certainly want to see if there are opportunities to go in that direction again,” says Gray.

Dale Miller, president of Master Chef Consulting Group in Clifton Park, New York, says Philly-style beef could be incorporated as a pizza topping in a variety of ways, such as in a barbecue style Philly cheesesteak pizza, perhaps topped with jalapeños, fried onion strings and Cheddar-Jack cheese.

Other ideas Miller suggests include ethnic twists, such as a Greek-style Philly cheesesteak pizza with feta, tomatoes and cucumbers. Incorporating Latin American flavors — perhaps with toppings such as roasted chickpeas and Peruvian peppers — also could be the foundation for a flavorful and interesting pizza, he says.

“You could also bring the heat trend into the equation,” says Miller. “Sriracha with a grilled steak topping could be a great way to do that, perhaps with sriracha potato chips and Cheddar-Jack cheese.”

In fact, the incidence of sriracha on pizza menus has grown 85 percent in the past year, says Kostyo of Datassential.

A key trend in pizza toppings has been the “premiumization” of ingredients, Kostyo says.

In addition to featuring steak as a premium ingredient, restaurants are also using high-end varieties of other proteins, such as pork belly, soppressata and prosciutto cotto, he says.

Premium vegetables appearing on pizza include kale, Calabrian chilies, and Brussels sprouts, accompanied by such unique cheese varieties as burrata, Taleggio or Grana Padano. Additional premium flavorings include balsamic glazes, sea salts and savory jams made from bacon, onions, or tomatoes, he says.

And, as consumers and pizza makers become more adventurous in their tastes, “Gourmet versions of pan, Sicilian or Detroit-style pizza are also having a moment right now,” says Kostyo.