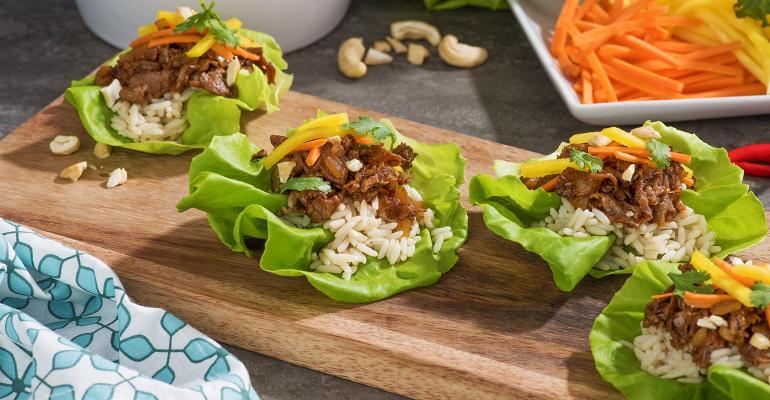 Beyond the basic cheesesteak

Operators see growing opportunities for sliced steak in a variety of sandwiches and other dishes.

From its humble origins at a street cart in Philadelphia in the 1930s, the cheesesteak sandwich has traveled well.

It has expanded not only throughout the region and around the country, but also across dayparts and cuisines. Reformulated with a variety of seasonings, sauces and toppings, the Philly-style shaved steak sandwich is in a continual state of reinvention on the menus of operators seeking to offer a hearty and flavorful serving of comfort food.

“In today’s world it’s pretty much whatever your mind can create to come up with a craveable cheesesteak sandwich,” says Dale Miller, president of Master Chef Consulting Group, Clifton Park, New York.   “It’s about bringing in different flavor profiles and textures that work well together.”

The evolution of the Philly-style cheesesteak sandwich is perhaps nowhere more evident than at The Groove Cheesesteak Co., an independent sandwich restaurant in Pittsburgh that last year won the “Best Cheesesteak in Pennsylvania” award from USA Today.

The Groove last March changed its name from Southside Steaks and revamped its menu with a variety of sliced steak sandwich options made with Philly-style beef, says owner Marc Feldstein.

“I still serve original Philly-style cheesesteaks, but I feel the diners in Pittsburgh are looking for fresh ingredients and exciting flavor profiles,” he says.

The Groove’s menu lists a range of regionally inspired steak sandwich options, each distinguished by its various cheeses and other toppings.

The Boston cheesesteak, for example, contains seasoned steak with mozzarella cheese, fried onion strings and a housemade horseradish sauce, while the spicy Santa Fe cheesesteak is seasoned with chili and topped with cheddar cheese, lettuce, tomato, fried jalapeños and a chipotle mayo.

Others include the Denver, with bacon, fried onion strings, Monterey Jack cheese and barbecue sauce, and the hometown Pittsburgh cheesesteak, topped with Monterey Jack, lettuce, tomato, coleslaw and French fries that are layered inside the sandwich — a regionally popular variety of sandwich construction.

Feldstein says about 30 percent of his customers order the classic Philly cheesesteak “whiz wit” — topped with Cheez Whiz and fried onions — “but others really appreciate the ingenuity of the flavors we’ve put together for them.”

In addition to the regional cheesesteak sandwiches, The Groove’s customers can choose from the “Build Your Own Cheesesteak” menu, which offers a seven-step customization process, beginning with the choice of a toasted or untoasted bun and continues with a variety of cheeses, seasonings, toppings and sauces.

“We try to take the cheesesteak in a different direction,” says Feldstein, who adds that he changes the menu often. “We try to keep it fresh and exciting for our guests.”

Other sandwiches, and more

Most restaurant operators rank appearance (when cooked) and taste as the most important attributes when selecting a Philly-style steak to use an an ingredient in their dishes, according to a survey conducted by AdvancePierre, makers of the Steak-EZE® line of Philly-style beef products. Restaurateurs participating in the survey also said they seek a steak product that can be prepared quickly, offers good value and contains high quality beef.

Sirloin is the most popular beef cut among quick service operators that menu Philly-style steak dishes, at 36 percent of respondents, followed by ribeye at 26 percent.

Jennifer Daskevich, owner of Coastal Grill & Bar in Kissimmee, Florida, founder of Sandwich America and 2013 World Sandwich Champion, says the quality of the protein and the quality of the bread are the two most important components of any sandwich.

For a twist on the traditional Philly cheesesteak, Daskevich suggests that thinly sliced beef could be incorporated into a grilled cheese sandwich, made with a brioche toast, provolone cheese and caramelized onions.

“Sliced steak is such a versatile ingredient,” she says.

Miller of Master Chef Consulting Group says that in addition to recreating Philly-style sandwiches with new ingredients and flavors — such as fried pickle chips, aioli or Caribbean-style seasonings — operators also can think outside the traditional sandwich category.

He suggested as a snack or appetizer a cheesesteak bruschetta with ricotta cheese and tomatoes, topped with some parmesan or pecorino cheese, or a monkey skillet bread baked with fried Philly-style steak and aged cheddar.

“That would be a very nice shared dish, and would be different from a sandwich or a wrap,” he says.

As potential breakfast items, Miller suggests a variation on eggs Benedict using sliced steak, or perhaps an ethnic dish such as chilaquiles or shakshuka, enhanced by the incorporation of Philly-style shredded beef.

Chilaquiles, a traditional Mexican breakfast, is made with fried eggs, fried tortillas and usually either red or green chili and topped with queso fresca, while in some recipes skakshuka is a Middle Eastern skillet dish made with fried eggs and tomatoes, and seasoned with hot chili, garlic and paprika.

“We pop it in the oven, and it comes out great,” she says. “The pico de gallo adds a lot of nice flavor to it.”

Operators should have plenty of opportunities to menu profitable sliced steak items in 2017, as the industry looks forward to favorable wholesale beef prices, according the National Cattlemen’s Beef Association. The NCBA reports that the use of shreds, cubes, strips and shaved beef as menu ingredients increased 9 percent last year, and the trend is expected to continue.