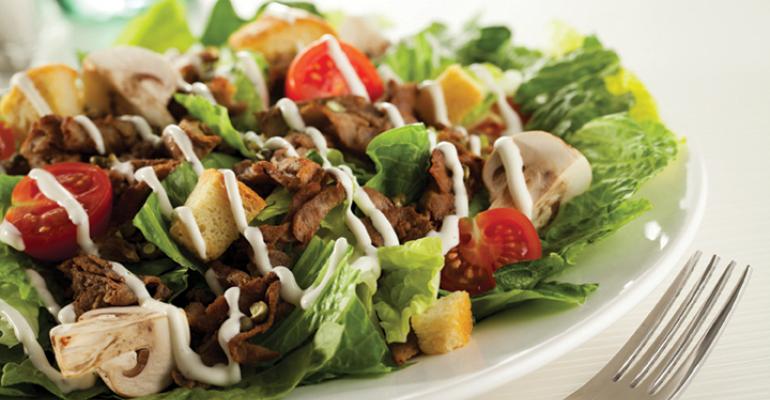 Salads are by definition a blend of flavors and textures, whether of the garden variety featuring fresh vegetables, or made with grains, pasta or other ingredients.

Whatever their base composition, salads can quickly be transformed from side dishes into entrées with the addition of a protein, such as sliced steak. Steak salads allow consumers to pair the vitamin-rich crunch of a vegetable mix or the nutrient-dense qualities of whole grains with the satiating protein of beef.

“A steak salad allows people to have a lighter, healthy option while still enjoying the great taste and nutritional benefits of beef,” says Hillary Makens, a spokesperson for the National Cattlemen’s Beef Association, a contractor to the Beef Checkoff.

In addition to protein, beef is also a good source of iron, zinc, and B vitamins, she notes.

In addition, he says, having some steak salad recipes on hand in the kitchen facilitates cross-utilization of product, which can help to reduce waste.

According to a survey of quick-service restaurant operators by AdvancePierre® Foods, suppliers of the Steak-EZE® line of Philly-style beef products, 28 percent of operators who use Philly-style beef products use them in salads. Sandwiches are the most common use, followed by pizza. Restaurateurs in the survey say they seek a steak product which can be prepared quickly, offers good value and contains high quality beef.

Makens of the NCBA points out another reason that foodservice operators might want to consider putting steak salads on the menu: Beef prices are currently the lowest they have been in two years, down more than 10 percent since 2014.

Prepping the steak with seasonings or marinades allows restaurateurs to impart bold ethnic flavors into their salad dishes, which can boost their appeal to the adventurous palates of today’s consumers, says Poyourow.

For example, the steak could be flavored with guajillo chili — a Mexican pepper with mild to medium heat  — for a Latin American twist, or marinated in a lemongrass and ginger mixture to top an Asian-themed salad.

While Poyourow suggests that locally grown veggies can provide a fresh and flavorful base, chefs should also consider starting with lentils or grains, possibly in combination with greens such as baby kale or spinach.

“Think about things like red quinoa, bulgur wheat, lentils — there’s no reason why salad has to be lettuce,” he says. “You could do a cold grain salad with vegetables and sliced steak on top, so you are getting those high-fiber carbohydrates, which are absolutely fine for you, along with the vegetables and the lean protein.”

A bed of lentils or couscous could help tie a properly seasoned beef salad together as a Middle Eastern or Mediterranean dish, Poyourow explains.

“Everybody’s looking for new and different flavors,” he says.

Some recipes suggested by the NCBA also skew toward ethnic flavor profiles. A “Tandoori Tostada Salad,” for example, includes tandoori-marinated steak with a mango-mint chutney and a raita sauce — a blend of sour cream, yogurt, mayonnaise, cucumber and mint — on a bed of cabbage, lettuce and radicchio, with slices of mango, cucumber and toasted coconut, and served on a pappadam wafer.

A steak salad can also be a minimalist creation.

The “Pittsburgh salad,” as it’s known in the region, borrows from the local custom of using French fries as a sandwich ingredient rather than a side item. The dish often begins with a simple dinner salad, topped with thinly sliced or shaved steak, French fries and cheese.

“We ran it as a special, and it went so well that we added it to the menu,” says Carmen Caratozzolo, co-owner of Connie’s Diner in Waterloo,New York.   “We’ve done other steak salads here — we’ll do a tenderloin Caesar, or we’ll do a tenderloin Cajun salad, and those work well. But this one just really took off. I think it’s the combination of the fries and the shaved steak.”

Connie’s Pittsburgh Salad is served with a Riviera dressing, and includes a bed of iceberg lettuce, tomatoes, carrots and onions, covered with about six ounces of hot, shaved prime rib, then freshly fried French fries and shaved mozzarella.

“There’s a ‘wow’ factor when people see it,” says Caratozzolo. “It kind of sells itself.”