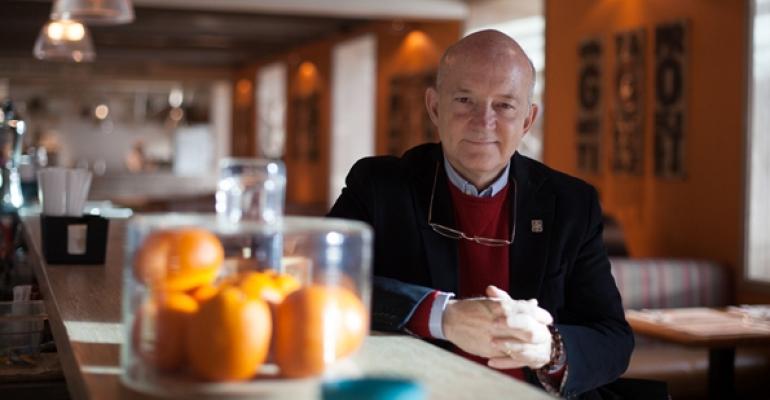 The Russian franchise operator can resume growth once tensions ease, according to founder Rostislav Ordovsky-Tanaevsky Blanco.

The closure of three McDonald’s restaurants in Crimea Friday further highlighted uncertainty about a possible trade rift between the United States and Russia that has been brewing since the latter’s standoff with Ukraine.

Restaurant executives in the United States have been monitoring their interests in Russia and Ukraine amid those tensions since February, when protests in Kiev led to the ouster of Ukrainian President Viktor Yanukovych and ultimately to Russia annexing Crimea from Ukraine. Western brands’ primary course of action in the conflict has been to rely heavily on their native Russian partners entrusted with franchised locations, executives said.

One of Russia’s largest franchise operators, Rosinter Restaurants Holding, has been fighting against low-double-digit declines in same-store sales throughout 2014, even before the Crimea crisis, said the company’s founder and chairman, Rostislav Ordovsky-Tanaevsky Blanco. The conflict between Russia and Ukraine has not helped, he said, but a slowdown in those two economies already had set some of Rosinter’s plans into action.

“We had seen things [in Russia] stagnating already, not only at Rosinter but also in the foodservice sector and retail sector, which had seen a drop in consumption,” Ordovsky said from Moscow during a phone interview with Nation’s Restaurant News. “All in all, 2014 will be a difficult year regardless of Crimea. It adds a bit of nervousness to the situation, but the 10-percent devaluation [of the ruble] makes an impact and brings inflation on the goods we buy. There also will be a slow balancing in the correction of the real estate market.”

Rosinter operates 383 restaurants in 42 cities throughout Russia, Ukraine and eight other former Soviet Republics. In addition to its proprietary Russian brands, it operates 33 TGI Fridays units and 28 Costa Coffee locations, and it is the licensee for McDonald’s locations slated for Russian transportation hubs. The company is not involved in the closed McDonald’s restaurants in Crimea.

Ordovsky spoke with NRN about why he maintains that Rosinter can resume growth once tensions between the United States and Russia ease and the economy in Russia regains its footing.

Western executives have said consumer confidence is much worse in Ukraine right now than in Russia. Is that how it appears to you?

Let me start with a little perspective. Ukraine and all these countries of the former Soviet Union are in reality only 20 to 25 years of age. In a very short period of time, they have gone through a lot of stages of evolution that usually took a whole century in the West.

There is nervousness in Kiev, of course, but not because of Crimea, but because the instability of who will be the next president. There is an extremist, rightist force trying to influence the transition government in Ukraine. That is what has produced this lack of confidence and drop in sales.

The confidence in the political situation in Ukraine has been deteriorating consistently for the past 15 years. The lost confidence hit a peak when the street demonstrations started [in February]. People were encouraged and thought finally that the voice of the people would be heard, but then we know what happened, and unfortunately we have what we have today.

Will that affect U.S. brands? I don’t think so. On the contrary, in a crisis, people trade down, so the people who would benefit would be solid QSR operators.

How about the effect of the Crimea conflict on your consumers in Russia?

My personal opinion is that of course the Crimea factor brings some nervousness to the Russian people, but also joy, correcting a mistake made by [former Soviet leader Nikita] Khrushchev in the 1950s [transferring the territory from Russia to Ukraine]. There is a lot of happiness for regaining Crimea, but also some sadness because it came at the cost of damaging the relationship with Ukraine.

Russia had been going into a recession already. We started feeling that the consumer was a little more concerned and careful about expenses in January, before the Winter Olympics and before any idea that this Crimea thing would happen. The 10-percent devaluation of the ruble will have an effect, because Russia depends a lot on imports for the goods it consumes.

But what risks are there for you or for Western restaurant brands if tensions do escalate between Russia and the United States?

People are a little worried about whether this will cause Russia’s relationship with the West to deteriorate, but I don’t believe it will. [Russian President Vladimir] Putin, President Obama and Europe all need to save face. I hope that, unless somebody tries to escalate the situation, this all might calm down in a few months.

Assuming things calm down, the U.S. brands here are very well received and respected. … At this stage, this clash will have no effect on Russian brands. But if people react against Western brands, and if it escalates into a full-fledged conflict, everyone will lose. … If [Western governments] decide to attack the ruble or stop importing Russian oil, I think you can kiss some of your money goodbye [through the freezing of royalty income].

Western franchisors have said their main contingency is to work closely with their Russian partners like you. What are your contingencies in this uncertain climate?

We have had an economic issue before we had a political issue this year. Contingencies are difficult to put together for a war, but I’m not putting any together for such a conflict.

This is my fifth crisis. I left Venezuela in the crisis of 1984, and I’ve been living in Russia through major crises, such as in 1998 and 2008. Now we again have a localized crisis of the emerging markets, which grew too much, and the economy became a bit too hot. Brazil is also going through this, as is India. We are doing a very thorough analysis of our support center and will reduce staff there a little bit, as well as optimize all our procedures and processes.

In the first quarter, the real estate market in Russia had a little correction, but now the real correction will take place.

You sound optimistic for Western brands once Russia’s Crimea standoff and recession get resolved.

The restaurant industry coming from the United States is definitely the most developed and the best prepared in terms of systems, procedures and brands for the international market. We have learned a lot from the TGI Fridays team throughout 17 years of cooperation. The magnitude of knowledge and experience is something your country should be proud of.

International business is difficult, especially for casual dining, but Western quick-service brands have most of the international market. Everybody has something to say about how the U.S. is guilty for everything bad in the world, but the reality is you have a great export in your restaurant brands. It has brought a lot of success to the Russian industry.