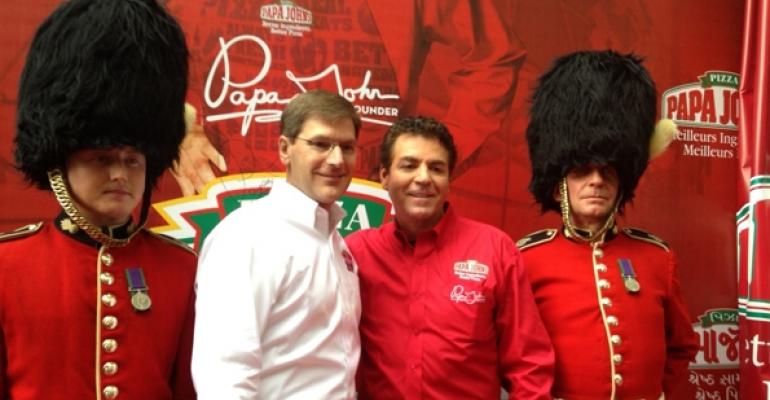 Papa John’s International Inc. celebrated the opening of its 1,000th location outside of North America on Oct. 9 in London.

The event featured founder and chief executive John Schnatter, who started the Papa John’s Pizza chain in 1984, as well as fans waving flags from some of the 35 countries in which Papa John’s now operates.

“Today’s event was a great way to celebrate a milestone that so few brands have ever reached,” Schnatter said in a statement. “We are very pleased with the steady growth of Papa John’s in the international arena over the last 15 years. … We are able to deliver on our ‘Better Ingredients, Better Pizza’ brand promise in virtually every corner of the world, from Europe to Asia, and South America to the Middle East.”

Louisville, Ky.-based Papa John’s opened its first international unit in 1998 in Mexico City. In July, the chain opened its 1,000th international location in Moscow. Currently, 1,045 of the company’s approximately 4,300 restaurants are located outside North America.

Tony Thompson, the brand’s president and chief operating officer, noted in a statement that the company made a concerted effort to improve international operations and increase expansion outside the United States over the past few years.

“International development is the long-term growth engine for Papa John’s,” Thompson said, “and we will continue to bring a better-pizza experience to more and more consumers around the world.”

Papa John’s also has extended its marketing focus to countries outside of the U.S. In July, Papa John’s became the official pizza sponsor of The Football League, a professional soccer organization in the United Kingdom.

Domino’s Pizza, for example, has more than 5,000 international restaurants and has projected that nearly all the chain’s unit growth over the next several years will come from outside of the United States. Domino’s international division has increased its same-store sales for 78 consecutive quarters.