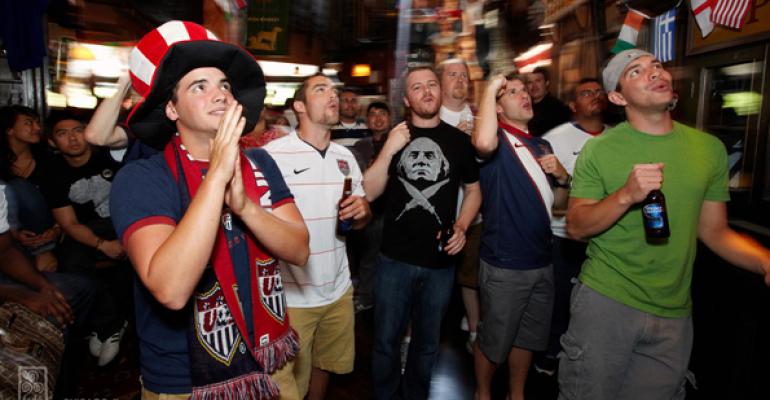 Many executives anticipate other major sporting events, notably the NCAA basketball tournament during March Madness and the 2014 World Cup this summer, to have a bigger effect on traffic and sales.

Some sports-friendly casual-dining chains have noted that while the 2014 Winter Olympics might provide a slightly positive incremental lift, their expectations for the Winter Games’ ability to drive sales and traffic were about as high as the Jamaican bobsled team’s hopes of medaling.

Outside of a few marquee events, such as men’s and women’s ice hockey, the Olympics, concluding this weekend in Sochi, Russia, likely would not produce many major dining-out events, owing perhaps to the time difference and resulting broadcast delays, lack of medal prospects for American athletes, or few popular sports that attract people to restaurants from their homes or offices, marketers said.

RELATED
• McDonald’s responds to criticism of Olympics partnership
• All in: Leveraging the dual branding power of restaurants and sports
• More restaurant finance news

Many of those same executives anticipate other major sporting events, notably the NCAA basketball tournament during March Madness and the 2014 World Cup this summer, to have a bigger effect on traffic and sales.

“The Winter Olympics just aren’t a major draw, especially a Winter Olympics in a different time zone,” Andrew Pudduck, vice president of marketing for Hooters, said of the 2014 Games. “If they were in Salt Lake City [as in 2002] or Vancouver [as in 2010], in relatively the same time zone, there would not be spoilers on the morning news.”

Even if viewers avoid spoilers from news sites or social media, fewer of them have tuned in to this year’s Olympics compared with the event four years ago. According to Nielsen TV rating data reported in the Los Angeles Times, primetime viewership of the 2014 Winter Olympics in Sochi has failed to keep pace with the 2010 Winter Olympics in Vancouver. Through the second Sunday of this year’s Olympic Games, primetime broadcasts averaged 23.2 million viewers, down 11 percent from 2010.

Nielsen also reported that the Winter Olympics in Sochi has averaged a 6.1 rating in the 18-to-49 age demographic, which is 14 percent lower than the 2010 Olympic Games’ rating with the same set of viewers.

Several operators have noted anecdotally that some events in which American teams and athletes were expected to compete for gold medals — particularly hockey — did boost sales and traffic in their restaurants.

Pudduck of 400-plus-unit Hooters made a second phone call to Nation’s Restaurant News from the restaurant in the Cumberland neighborhood of its headquarters city of Atlanta, noting in a voicemail that hundreds of customers had showed up to cheer on the United States’ men’s hockey team in a semifinal matchup against Canada.

“It is packed,” Pudduck said. “There are a ton of people here, and they’re definitely viewing and enjoying the hockey game. For sure, today will be a great day for the industry, but we’re also looking forward to March, where pretty much every day of the [NCAA basketball] tournament is like this.”

Eric Peterson, director of operations for Atlanta-based Fadó Irish Pub, said the Olympics have been more of a boon to the 14-unit chain than to other sports-friendly brands because the Winter Games match the excitement of international soccer, the sport that drives much of Fadó’s game day traffic.

“It’s most specifically around men’s hockey and a little with women’s hockey,” Peterson said. “On the more popular sports readily accessible to people, we’ve promoted against them and seen incremental crowds. It brings out that nationalist pride no matter where you’re from. That gets people more hooked into the pub, and they’ve been extending their visit for one more appetizer or one more pint.”

As it does for soccer games for the English Premier League, Fadó opened its restaurants early in the morning to let crowds watch Olympic hockey games live.

“We opened up early last week for Team USA versus Russia, and we had 100 people, so it was well worth it,” Peterson said. “It was probably comparable to crowds in some locations for [a Champions League game between] Manchester City and Barcelona.”

Even for less popular sports like curling or ice dancing, as long as American athletes have a chance to advance, customers stick around longer to see how their countrymen do, he added.

“I’m not a hockey guy; I’m a USA guy,” Peterson said. “When we’re in the medal hunt, I’m into it, but I couldn’t tell you how to do a triple axle on ice skates.”

As with the Winter Olympics, Fadó does not “go after it guns blazing” when it comes to marketing for March Madness, mainly because it conflicts with St. Patrick’s Day, Peterson said. But this summer’s World Cup, which takes place in Brazil, will be a different story.

“There’s not a lot of conflict in June and July, so the World Cup truly means incremental traffic,” he said. “The times are great for us this year, fundamentally all during the day. The only thing we’d wish differently would be for a better draw for the U.S.”

Similarly, 1,000-unit Buffalo Wild Wings is gearing up for the NCAA basketball tournament.

“In some markets [the Olympics are] a bigger deal than another market … and there weren’t any Olympics last year, so there should be some incremental benefit from that,” Twinem said.

Also of great importance this year is the fact that Easter will shift to the second quarter of 2014, compared with the first quarter of last year, when the holiday fell on the second weekend of March Madness, when the men’s and women’s basketball tournaments get winnowed down to the Sweet 16 and Elite Eight rounds.

“Getting Easter out of the tournament is always beneficial for us,” Twinem said. “More people can get away and come in and watch the games, versus last year when it was in the Sweet 16 rounds and not everybody could get away from family.”

Hooters did not experience a negative effect from last year’s Easter calendar shift, so the chain will build upon its crucial March Madness programming with incremental promotions with ESPN during the tournament, Pudduck said. The chain will sponsor ESPN’s desktop and mobile websites, where fans fill out their tournament brackets, reprise their relationship with announcer Dick Vitale and bring ESPN personality Jay Williams into the fold as well.

The chain also will give away a VIP trip to Dallas for this year’s Final Four.

“The Winter Olympics are a nice plus and good to have,” Pudduck said, “but March Madness is where you really show people what you have.”