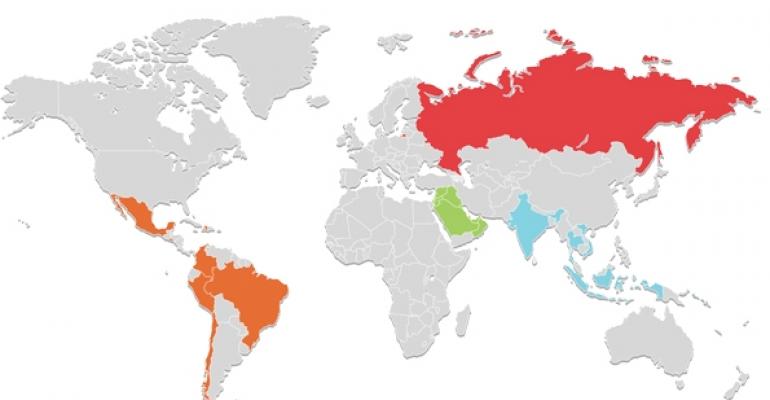 Euromonitor&rsquo;s reveals the international markets that restaurant companies should watch.

Even as restaurant companies continue to push their way into China and India in the next few years, several other markets — with even more growth potential — will beckon.

“China, India and Brazil are not going to go away,” said Michael Schaefer, head of beverages and foodservice for Euromonitor International, a London-based business intelligence specialist with offices worldwide. “But if you are a chain operator, it’s useful to consider other markets where local operators are not as entrenched.”

In other words, while the size of China’s commercial foodservice market will remain one of the largest — Euromonitor expects it to grow, in constant terms, by $165.5 billion to $624.5 billion by 2017 — about 90 percent of that market is made up of native concepts, leaving minimal growth opportunities for U.S. brands. Meanwhile, other regions present a considerable upside and are where forward-looking chain operators should be targeting their efforts.

The following are Euromonitor’s picks for international markets that restaurant companies should watch, along with its projections for growth of the commercial foodservice market in those regions.

Brazil may be the well-known ‘B’ in the BRIC — Brazil, Russia, India and China — countries, but don’t discount Columbia, Chile, Peru, and to a lesser extent, Mexico, Schaefer said.

In the past 10 years, a combination of government policies and investment have lifted tens of millions of Latin Americans from poverty to middle-class status.

“There’s a lot of demand for newer, more modern eating-out experiences,” Schaefer said, adding, “The size of the opportunity is quite significant for a chain operator.”

Indonesia, Vietnam and Thailand have huge populations with cultures already inclined to eat out and whose incomes are rising, Schaefer said. Consumers there are into affordable luxuries, and snacking is a big part of the eating-out culture.

Brands such as 7-Eleven, Kripsy Kreme and Dunkin’ Donuts have already made inroads into those countries, he noted.

The Gulf States are already drawing lots of interest from U.S.-based chain operators, and that will only grow in the next few years, Schaefer said. The United Arab Emirates, Saudi Arabia — all of the countries on the Arabian Penisula, with the exception of Yemen —should see continued growth, especially among chain operators.

The region’s shopping-mall culture plays a big role in driving restaurant use. “Because it’s very, very hot, so much of life takes place in and around shopping malls,” he said. In addition, the region has a well-developed infrastructure and local partners that already have strong industry track records.

Euromonitor projects, in constant terms, that the commercial foodservice market in the United Arab Emirates will grow by $3.4 billion to $11.4 billion by 2017.

This region — and Russia, in particular — is ripe for development, Schaefer said. In Russia, there are pockets of income growth and a growing demand for eating out, even though there is no tradition of eating out as there is in Asia.

In the short term, restaurant companies may find infrastructure to prove a problem in some areas, and finding staff and local development partners may be tough. However, noted Schaefer, “the long-term view is there’s real opportunity there.”

Euromonitor projects, in constant terms, that Russia’s commercial foodservice market will grow by more than $5 billion to $24.2 billion by 2017.