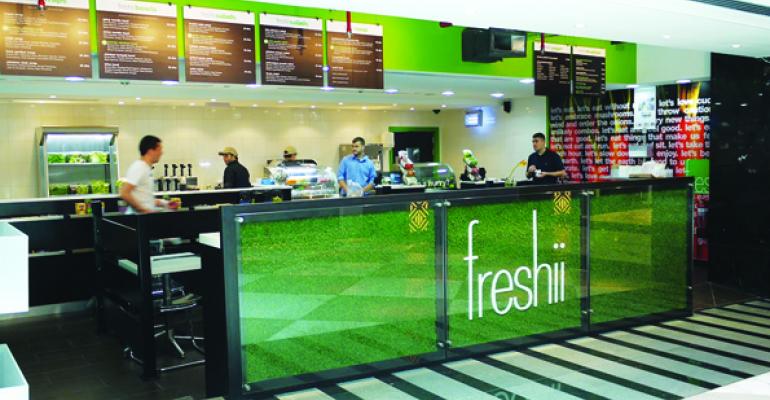 Last month, as some restaurant companies like Yum! Brands Inc. experienced a rare hiccup in sales and traffic in China, 100-unit fast-casual chain Freshii said it would enter the populous Asian country this year with a master franchise agreement.

Chicago-based Freshii, which first opened in Toronto in 2005, signed a 10-year deal with ICON, calling for 100 franchised locations to be operated by the China-based company, and approximately another 200 units with sub-franchisees.

Founder and chief executive Matthew Corrin said the first location would open in Beijing and that expansion initially would focus on Beijing, Tianjin and Hebei.

Though Freshii is a young company, it has franchise agreements in place covering 300 locations under development, and the brand recently opened in Austria, Colombia, Switzerland and the United Arab Emirates, Corrin noted.

In China, however, most of the Western brands are long-established restaurants with thousands of locations in the United States and around the world, including KFC, Pizza Hut, McDonald’s and Starbucks Coffee. Last month, Outback Steakhouse opened its first Chinese location in Shanghai.

But Corrin remains undaunted by the prospect of entering China with Freshii, which he has tried to build from the start as a global brand that can have its health-focused menu adapt to local tastes. He learned how to import the chain to the United States from Canada, so he does not listen to people trying to warn him how difficult opening in China could be.

“That’s true about anything,” he said. “When I had six restaurants and was living in Toronto and trying to convince folks we could work in the U.S., they’d say that Canadian brands get beat up and Freshii would never succeed. I’d like to think I’ve proven them wrong.”

He spoke with Nation’s Restaurant News about the challenges and opportunities for an upstart brand like Freshii in China.

Western brands growing in China tend to be traditional quick-service restaurants, so are you worried about having to establish a “health-casual” segment from scratch?

Isn’t it interesting that Yum is slowing its sales growth there? When Yum is slowing down a little in China, you have to wonder if the Chinese consumer is telling us something or getting slightly more educated around health and wellness.

Our menu is very Asian-inspired at a rudimentary level, with rice bowls and pho-inspired soups. Chinese consumers’ diets to start with tend to be healthier. … They’ll see the usual suspects [of Western brands] and then see our brand with “fresh” in its name, where all the food looks fresh and they can see all the ingredients as their food is made for them. We’ll skew closer to Subway than to KFC, and the consumers will dig a little deeper and see that it’s not just a sub sandwich, but that it’s brown rice, salad and soup, and we’ll do it with our Western spin on it.

Are China’s coastal cities where you’re mostly likely to find middle-class customers for whom Freshii could make healthful eating convenient?

I think there’s a place for our concept there, but we’ve got to be smart and enter in similar ways that we would enter any country, with the same real estate strategy. It actually doesn’t matter that consumers know who Freshii is. What’s important is that we’re the convenient option and the path of least resistance for the customer who’s looking for something healthful. We’ll be located in office parks and such, where people might be thinking more healthfully.

Part of our entry to China is obviously the consumer side — you can only go into China with a brand that’s conducive to the target consumer — but we have a development strategy as well, and a model that’s conducive to scale. We need to be able to execute in small footprints, and that’s what we’ve been doing for years in North America. We open small locations and push large sales per square foot out of them, which makes us confident we can do the same thing in China. A lot of brands take several years to find their way in foreign markets, but I think that’s because they had problems with the unit-level P&L.

What made ICON the right franchisee for China? Do you worry at all about not having a corporate employee on the ground in there to ensure food safety and other compliance?

ICON approached us, and as we got to know them for months, we found out we’re well aligned. They have operating partners born in the United States but who have done commerce in China their whole lives. One of them grew up in Southern California, but he’s done business in China for 20 years, so he knows how to adapt Western brands to the Chinese market. They have operations experience with brands with nice track records in China, high-scale franchising and within small footprints. They’re also philosophically aligned and passionate about health and wellness.

But the reason why we put this aggressive development schedule in place there is because we also intend to execute on having a corporate representative in the China market to work alongside our local partners until we believe they’re all absolutely on the right track. Whether we have somebody there or not, we needed to pick a partner that gets that doing the right thing is the only way to go.