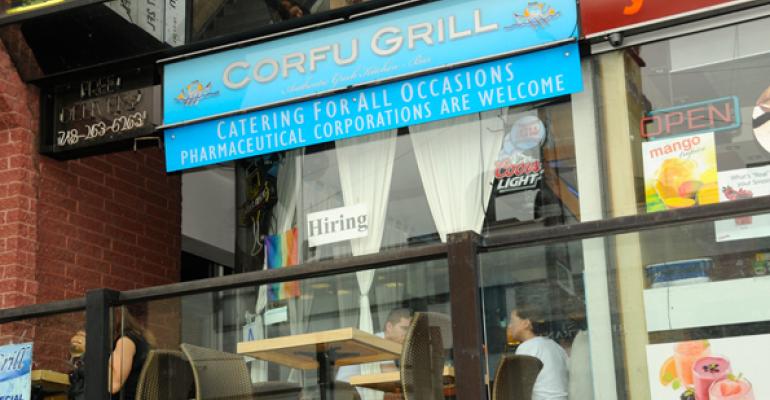 Aramark is using sports fans’ growing appetite for local food to bring a new option to Citi Field, home of the New York Mets, this summer.

A pop-up version of Corfu Grill, a popular Greek restaurant in Forest Hills, N.Y., near the stadium, will serve Citi Field visitors from July 5 through Sept. 28.

The pop-up is part of a Citibank program called Citi Small Business Call Ups, for which the bank nominated three of its customers — Ceetay, an Asian fusion restaurant in the Bronx; Lady M Confections, a pastry shop in Manhattan; and Corfu Grill — to be a “new player [on the] Citi Field restaurant roster,” according to a website where fans were invited to vote for their choice.

Fans attending games on May 23 through May 28 could also vote at the Citi Call Ups booth.

Citi promoted the program with in-stadium promotions and through social media. It also offered Citi cardholders a 10-percent dine-in discount at the three nominees during the voting period, May 23 through June 6.

Aramark, which runs the foodservice program at Citi Field, will work with Corfu Grill to develop and implement the menu.

“We will be staffing it, so the restaurant is in very good hands because we understand the volume piece of it,” said Jennifer McCrary, general manager for Aramark at Citi Field.

Corfu Grill will provide the recipes and the names of the dishes, she added.

“We have to make sure that their signature items will work in a ballpark setting with the equipment that we have,” she said.

The program came about when Citi approached Aramark with the idea, she said.

“They wanted to highlight small business in the community, and we think it should work well. And I think fans are excited to have an influence. They like to have a say,” she said.

Georgios Aspiotis, owner of Corfu Grill, said Citi reached out to him to enter the contest. He promoted it through Corfu Grill’s Facebook page and other social media outlets, as well as with printed flyers.

He said he was now planning a tasting at his restaurant for the Aramark team.

“I’ll try to do something that’s going to be good quality, and at the same time fast for customers, so they don’t have to wait in line, and for the cooks, so they can make it really fast,” he said.

Those items might be chicken kebabs, souvlaki and a gyros plate or sandwich, as well as Greek yogurt with housemade preserves made from fruits such as sour cherry, orange and strawberry.

“I’m trying to introduce more gourmet and more sophisticated food than you eat from the halal stand on the corner,” he said. “I’ll make my proposal and I think they’re going to figure out what’s best for them and for Citi Field.”

Aspiotis said he won’t earn any proceeds from the pop-up, but he sees it as a great marketing opportunity.

“I hope this publicity will take my restaurant to a new level,” he said. “They’ve really helped me by putting my restaurant in front of the 160,000 people who will go [to the stadium] this season. I think I’m going to have pretty good exposure.”