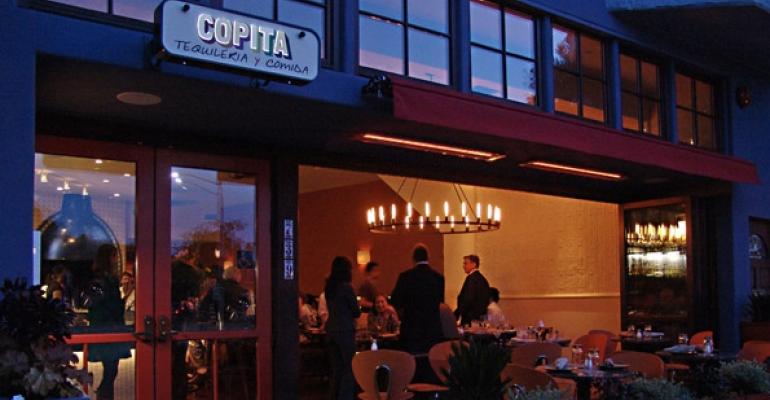 Joanne Weir mixed 2 ounces of tequila, 1 once of lime juice, 3/4 ounce of agave nectar and 3/4 ounce of water, and got a restaurant.

“I made him a Margarita and he asked me to open a restaurant,” said Weir, who in April opened Copita Taqueria y Comida with Mindel in Sausalito, Calif.

For the past two decades, Weir has mostly been traveling and writing cookbooks about the Mediterranean. Then she explored her admiration for the food and drink of Mexico in "Tequila: A guide to types, flights, cocktails and bites," her 16th book.

Her shift from Mediterranean to Mexican cuisine proved to be timely; shortly after opening Copita, Weir found out that she was gluten intolerant. She also realized that, apart from her Mexican wedding cookies, she could eat everything in her restaurant.

Though flour tortillas are popular in northern Mexico and in Tex-Mex and Cal-Mex cuisines, Weir had decided to use the corn tortillas of interior Mexico, which are made in-house. That decision proved to be fortuitous, and with a growing number of Americans discovering gluten intolerance, Weir decided to keep the entire menu gluten-free. 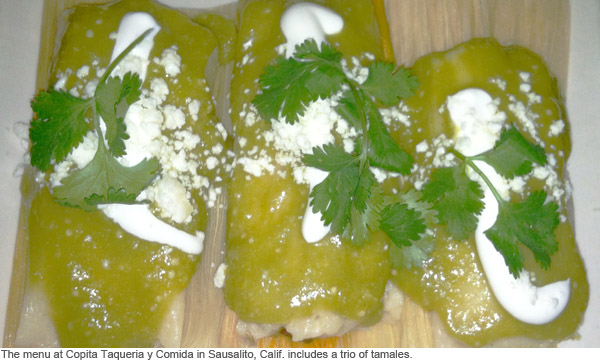 She said the restaurant’s culinary philosophy is a “fresher, lighter approach,” to Mexican cuisine, with items like wood-roasted chicken with pickled vegetables, heirloom black beans, chorizo and salsa rustica, and a salad of frisée, rainbow carrots, radishes, squash, cotija cheese, spiced pumpkin seeds and tequila-orange dressing. Her tortilla soup, rather than being a rich and cheesy affair, is a chicken broth with vegetables seasoned with chiles and cumin, topped with tortilla strips and a bit of avocado and cotija cheese.

The menu also includes a trio of tamales, four ceviches, a chicken with mole rojo, and tacos filled with ingredients such as seared California sea bass, Wagyu flank steak and shrimp with fire-roasted poblanos. 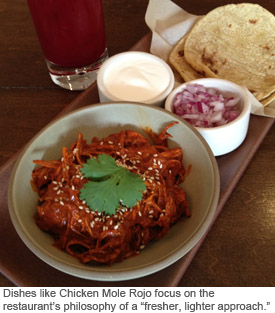 To run the kitchen Weir hired Gonzalo Rivera, a native of Ixtapa, Mexico, who had previously been chef of Marea in Miami Beach, Fla., and before that worked under San Francisco chef and restaurateur Michael Mina.

Also in the kitchen is sous chef Dilsa Lugo, a trained horticulturalist from Cuernavaca, Mexico, who, in true Bay Area form, is also in charge of the restaurant’s garden, where she is currently cultivating a variety of organic vegetables and cilantro.

Although Weir acknowledged that the food at Copita would not be found in Mexico, she added, “I do think we’re kind of authentic, but with kind of a twist.”

For example, for the traditional Mexican celebration Day of the Dead on November 1 and 2, Copita served a dish that isn’t Mexican, per se, but one that is Mexican in spirit, said Weir. “In the garden we grew thousands of marigolds [which festoon altars during Day of the Dead celebrations] and filled the restaurant with them and did butternut squash soup with marigolds and a little bit of chipotle crema,” she explained.

She admitted that returning to the kitchen 22 years after leaving Chez Panisse is “a little overwhelming,” particularly during the first three months, when she was cooking on the line. “I was so busy I didn’t even notice we had an ocean view for the first month,” she said.

However, she added, “What I love about this is I have a need to learn. At this point in my life, it’s great to be back in the kitchen.”