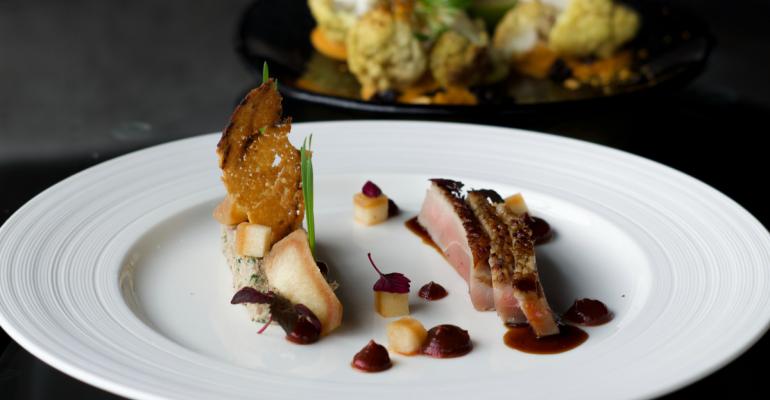 All told, Elaina Morris has more than 600 employees.
News>Independent Restaurants

Elaina Morris is the CEO, president, and cofounder of Ascend Hospitality Group, which operates four one-off restaurants, a four-unit steakhouse and six locations of Famous Dave’s BBQ. It’s a big job, but she styles herself as the “Chief Hugging Officer.”

“If you ask my kids what mommy’s superpower is, they’ll say, ‘It’s the way she makes people feel,’” the serial entrepreneur said. “My goal is to make everyone feel like they matter.”

Ascend includes Ascend Prime Steak & Sushi, a fine-dining restaurant in Bellevue, Wash.; Stanford’s Steak, a contemporary steakhouse and lounge in Tacoma, Wash.; Stanford’s, a four-unit classic American steakhouse with locations in Washington and Oregon; restaurant and nightlife concept Anoche Cantina in Tempe, Ariz.; an 8,000 square-foot sports bar and nightlife concept called Six40rty in Tempe; as well as the Famous Dave’s restaurants in Utah and Washington. All told she has more than 600 employees.

Famous Dave’s founder, Dave Anderson, is a big influence on Morris’s approach to her business, which is to serve a guest or serve someone who is serving that guest. That means she spends much of her energy serving her employees.

“As a leader you have to be very focused on what is best for your people,” she said, “because if they feel good about coming to work and know that we actually care about them and their wellbeing, they’re going to do a better job standing by guests’ tables and making them feel amazing,” she said. “I think it’s just constant attention to, how do I help people know that I care about their whole wellbeing and [then help to] identify their abilities?”

But that doesn’t mean coddling them. Working in restaurants is hard, and making those restaurants great is even harder.

“We feel that if you want us to take you seriously then you have to take yourself seriously,” she said.

“It’s challenging one another to be our best,” he said. “If we surround ourselves with individuals with diverse backgrounds, talents and skills and we … align ourselves with our common goals, we can get the best versions of all of us.”

An example of that is the approach Frederick takes to food, cocktail and event development at his steak and sushi restaurant.

Anyone who wants can submit proposals or ideas, but then those ideas are analyzed and criticized so that they come up with the best menu item or event that the whole team is capable of.

“It can be very challenging,” Frederick said, but it is an approach that gets the best out of people.

That starts with hiring the right people and understanding what drives them, he said.

“The restaurant industry needs a lot of passion,” he said. “But we believe that passion is often fleeting. There are many days when it’s challenging and stressful and you’ve got to dig deeper than your passion and understand what your purpose is,” he said.

And then once you hire the right people you have to keep them. Morris does that by creating a fun but productive work environment, decent pay — she intentionally keeps it in the median of the market — and health insurance for people who work more than 25 hours a week. For 2023, she’s focusing on a new platform called U Ascend, “which is kind of like an internal university,” Morris said. It will train people to achieve whatever work goals they have, such as going from server to manager, from a fast-casual restaurant to fine dining, or from line cook to chef.

“I think it’s recognizing that there needs to be a career development path internally,” she said.

Overall, Morris tries to create a learning environment, which requires commitment from her staff, “to yourself more than anything,” she said. “My goal is to teach and train and help them realize their goals and their dreams.

“You can’t have an ‘I gotcha’ climate,” she added. “You can’t penalize people if their decisions didn’t work out. What you have to encourage is, ‘Okay, so it was a bad decision. So what? I’ve made 200,000 of them. How quickly can you pivot?’”

Ascend Hospitality Group will be honored as the Independent Creator at CREATE: The Future of Foodservice in Denver, taking place Sept. 19-21.