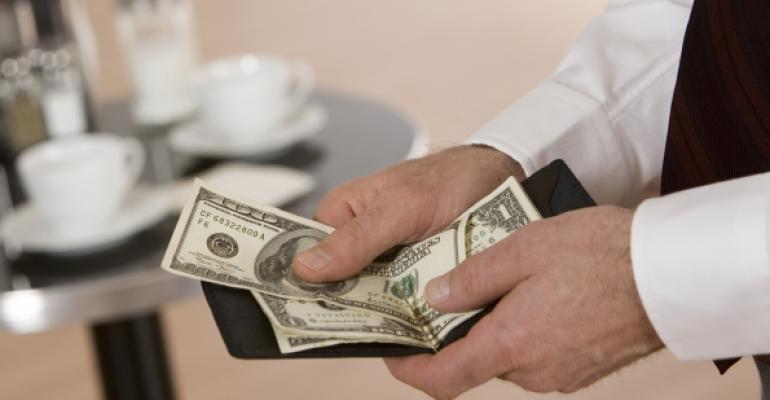 The movement to do away with tipping in New York gained steam with the announcement Tuesday that fine-dining restaurant Eleven Madison Park will move to a model in which service is included in menu prices.

Eleven Madison Park owner Will Guidara told Eater NY that he would raise the price of the restaurant’s prix-fixe menu to $295 from $225 in the new year, when minimum wage rates in New York City rise $2.50, to $7.50 per hour, for tipped employees, and increase 25 cents, to $9, for non-tipped employees.

Guidara said he would keep tipping in place at his á la carte restaurant, The NoMad, also in New York.

In an email to Nations Restaurant News, Guidara said he wanted to make the change at one restaurant at a time to see how it would work.

“With a change this big, a change I am not sure the dining public is completely ready for, we want to give ourselves the opportunity to watch how our guests and our team adapt. That said, we are excited to watch as the industry adjusts and evolves in the coming years,” Guidara said.

The movement to do away with tipping was given a shot in the arm earlier this year when respected restaurateur Danny Meyer said he would gradually eliminate tipping at all of his 13 full-service restaurants, starting in November with The Modern at New York’s Museum of Modern Art.

Guidara worked for Meyer’s Union Square Hospitality Group for many years, including a stint as general manager of The Modern. He was later appointed general manager of Eleven Madison Park and ended up buying the restaurant from USHG, in partnership with executive chef Daniel Humm, in 2011.

Guidara told NRN that it seemed logical to implement the change as new minimum wage laws came into effect.

“The New Year feels, to us, like the most appropriate and logical time to implement this change. Transitions like this are uncomfortable and sometimes you need external factors to compel you to make internal changes, like this one.”

Advocates for eliminating tipping say the model is antiquated, devalues the professionalism of servers, and creates pay imbalance between front- and back-of-house staff.

Several restaurants across the country had previously eliminated tipping, but most did it by adding an automatic service charge rather than raising menu prices. Others, including The Lazy Bear in San Francisco and Alinea and Next in Chicago, have started selling all-inclusive, non-refundable tickets, doing away both with the need to tip and preventing no-shows.

Joe’s Crab Shack, a 131-unit casual-dining seafood chain owned by Ignite Restaurant Group Inc., has been testing a no-tipping policy at 18 of its restaurants for several months, taking Meyer’s approach of raising prices instead of adding a service charge while increasing the hourly wage of front-of-the-house staff. Ray Blanchette, CEO of the Houston-based company, told Nation’s Restaurant News earlier that he expected turnover to fall and teamwork to improve.

Meyer told NRN earlier that with the increase in minimum wage and resulting higher menu prices, the wage gap between cooks and servers would rise even further, something he could address by doing away with tipping.

Update: Dec. 2, 2015  This story has been updated with comments from Eleven Madison Park and NoMad co-owner Will Guidara.