Culture eats strategy for breakfast, according to a quote often attributed to management expert Peter Drucker. And in a tightening market for restaurant recruiting and retention, culture is also eating lunch, dinner and late-night snacks.

“The biggest challenge companies are finding today are at the front end and the back end of the employee life cycle,” said Jim Knight, an industry speaker and author of “Culture That Rocks.”

Knight, who spent 21 years as a training and development executive with Hard Rock Café, said the challenge today is “finding and keeping great talent.”

While the restaurant products, environments, bricks, mortar, tools and processes are fairly similar across the industry, Knight said, the cultures are varied.

“Leaders of companies are starting to understand that culture is everything. It’s like oxygen to you and me,” said Knight.

“The restaurant industry, and maybe hospitality in general, is better poised to give people a chance. If they fall in love with you as a brand, they are likely to hang out with you for a career.”

A robust company culture and a clear communication of mission have helped Chili’s Grill & Bar recruit and retain team members in a tight labor market. 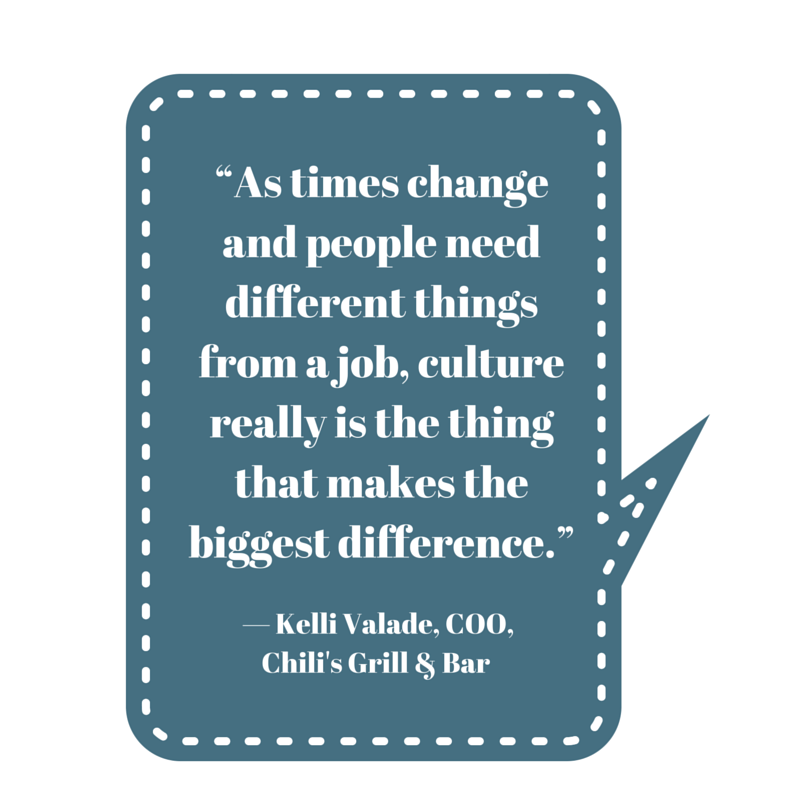 “Culture is a little nebulous,” Valade said. “It’s how people think and act.”

For Chili’s, Valade said, it is distilled into: “We connect, serve and give to create the best life.”

The 1,596-unit grill division of Dallas-based Brinker International Inc. has placed on several best-place-to-work lists and maintained comparatively low turnover rates with this emphasis on culture.

Valade said that Chili’s has “always had a unique and differentiated culture that started with Norman [Brinker], and there’s a huge legacy of that here.”

The culture and the way the company communicates it has evolved through the years, Valade said.
“As times change and people need different things from a job, culture really is the thing that makes the biggest difference,” she said.

Chili’s five years ago started in-restaurant meetings, or town halls, that have grown to larger gatherings at nearby hotels, sometimes with as many as 80 employees. The town halls each year reach between 2,000 to 3,000 of the 50,000 Chili’s company-owned restaurant employees.

“It’s truly important that there’s a connection to the company they can see from the very beginning. We like to say, ‘It’s all about feeling small again.’ We’re a really big company, but we want everyone to know we see them and know them,” Valade said.

Valade and other chain leaders hold the field town halls, usually three- to four-hour sessions, each week.
“We’ll get managers, high-potential servers, bartenders, key team members and general managers all in a room. Our goal is to connect, to align and continue to reinforce our culture.”

Valade said Chili’s turnover is far below the industry average both in management and hourly. “Our engagement scores are, I daresay, approaching world-class numbers,” she added.

“Even in tough times, they [employees] are still with us,” she said, “and I think that’s because of how personally we connect with our story and where they fit in.”

“Companies are really defined by the ability to really connect with team members,” Valade said, adding that the connection can make the employee the biggest advocate for the company in terms of what they are sharing with friends and on social media.

“We can get them to share our story way better than we can do that,” she said.

“Guests really look at your company now based on how you treat people,” Valade said, which has increased over the last few years.

“What we’ve done over the last decade is articulate the culture more overtly,” said Valade, who has been working at Brinker for 20 years.

Among other tools, Chili’s sends messages to its 50,000 team members through the digital HotSchedules platform and recently launched a short newsletter for all employees. Valade and Brinker president Wyman Roberts will send out short videos on Twitter if an important message needs to be broadcast, she said.

“We’ve always known the team members care about the goals of the company and the stock price, but they really care about how you make them feel. The culture will do that much more than the numbers.”

Culture can be an “esoteric, nebulous” concept, said business author Jim Knight, so many companies remain lost as to how to create, enhance and promote it. He offered these five suggestions for how restaurant companies can foster culture.​​

​Next: Make these tactics work for your business.

A robust company culture and a clear communication of mission have helped Chili’s Grill & Bar recruit and retain team members in a tight labor market.

Train and communicate in language workers easily understand. This might include inspirational storytelling and visual collateral. “You want these instructions to be in language that people are exposed to all day long,” Knight explained, citing airline safety cards, IKEA furniture instruction and Lego directions.

Create and embody purpose into the business. “Employees like to know that the business is about more than making things or making a profit,” he said, especially Millennials. “Today’s workforce cares quite a bit about the world, the planet and doing something bigger than themselves.”

Engage in some authentic philanthropic initiative. “It doesn’t matter what it is,” Knight said. “Pick something that the employees can galvanize around. Or, better yet, get the employees to start and you support it as a team leader.”

Lead with love. “You have to treat people like they are volunteers and love the ones you’re with,” Knight said. “I’ve worked for organizations where the standard was to manage through threats, punishment and fear and carry a heavy stick. Those days are long, long gone.”