In addition to higher wages, employers are increasingly under pressure to offer more in the way of benefits for their employees. Some are the result of government mandates like the Affordable Care Act, and adopted requirements for paid sick leave or family medical leave options on the city and state level. Other perks are more strategic. In a world where jobs are more plentiful and talent is limited, restaurant operators are adding benefits to attract top candidates and keep the best talent.

It’s an investment that goes well beyond pay, employers say. Benefits can range from the more costly investments — like 401K matching or college tuition assistance — to the more creative, like devoting a day to volunteer work or subsidizing a gym membership.

Not only do such benefits foster employee loyalty, they result in a more engaged worker, said Robyn Piper, founder and principal of benefits solutions firm Piper Jordan, based in San Diego. “The more engaged they are at work, the better they perform,” Piper said.

Starbucks Corp. has long offered employee benefits that go way beyond what is typical for the foodservice industry.

In 1991, for example, the Seattle-based chain launched Bean Stock, making green-apron-wearing “partners,” as the company calls its workers, eligible for stock options. The program started with 700 partners in more than 100 stores in the U.S. and Canada who were granted stock options at $6 per share. 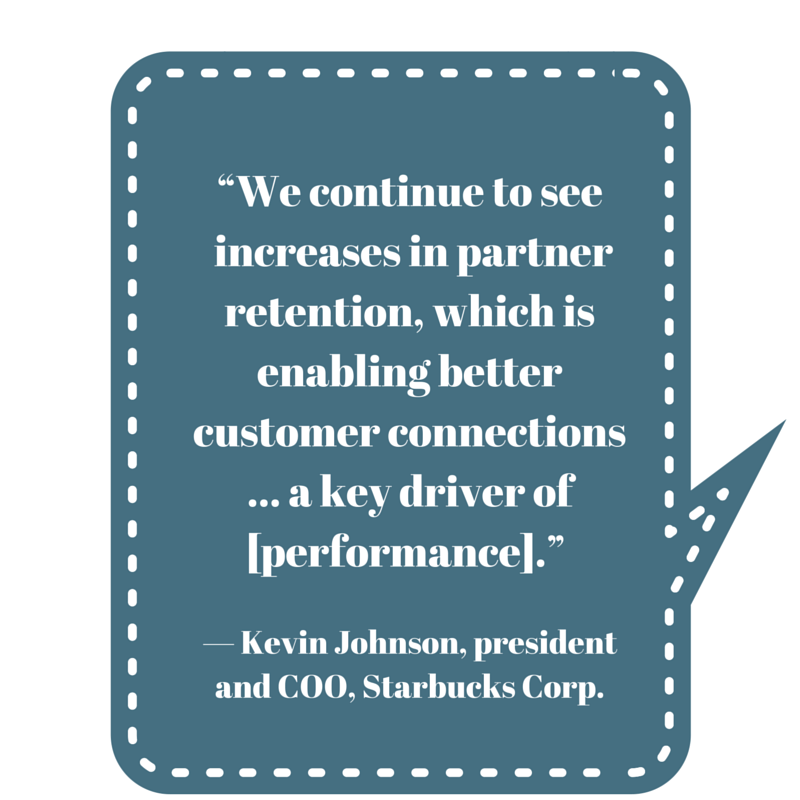 Since then, the program has grown substantially to include 145,000 partners in 22 markets by the end of fiscal 2015, and workers have received more than $1 billion collectively.

This year, the company made Bean Stock even more accessible by eliminating a requirement that employees had to work 360 hours in a year before they were eligible for grants. Now full- and part-time workers are eligible right away. The vesting schedule was also reduced from three years to two, allowing partners to benefit sooner.

Bean Stock is only one component of a robust benefits package that Starbucks officials say is a key factor in the brand’s success of late.

“When our partners are satisfied and engaged, the result is deeper customer connections and a better experience for everyone,” said Adrienne Gemperle, Starbucks’ senior vice president of global partner resources.

Starbucks employees working 20 or more hours per week, for example, are eligible for company-matched 401K contributions; as well as health care coverage for the employee and family members, including domestic partners.

Benefits include paid maternity leave and up to six weeks of leave for the adoption of a child. Starbucks also will reimburse some adoption expenses up to $10,000.

Most recently, Starbucks in 2014 launched a College Achievement Plan offering U.S. partners full tuition coverage to earn a bachelor’s degree online through Arizona State University. Members of the military or veterans can extend the benefit to family members.

Gemperle said an estimated 70 percent of the chain’s partners are students or aspiring students.

This year 5,000 workers are taking advantage of the benefit and this spring 120 are expected to graduate with a degree, she said.

The company also recently added the benefit of allowing partners free food and drinks while on shift, in addition to the traditional employee discount and a free pound of coffee every week. Such investments in employee benefits do not come cheap.

In April, Scott Maw, Starbucks’ executive vice president and chief financial officer, said the company’s investments in both employee benefits and digital initiatives (including things as broad as delivery and the mobile app) globally will total between $275 million and $300 million in fiscal 2016, an increase from about $145 million the prior year.

In fiscal 2015, almost $300 million was invested in healthcare for Starbucks workers, and partners earned $167 million in equity from stock options. The company contributed a total of $60 million in matching funds for 401K.

But company officials believe they are seeing big returns on that investment in the form of better performance. Starbucks officials have long argued that there is a direct relationship between the company’s investment in its partners and same-store sales results.

“We continue to see increases in partner retention, which is enabling better customer connections, and customer connection is a key driver of our record second-quarter performance,” he said during a call with Wall Street analysts.

“Our results provide powerful evidence that our strategies and focused investments are paying off today and setting us up for continued growth in the future.”

Next: Make these tactics work for your business.

Volunteer together. Invite your staff to serve at a soup kitchen or help clean up a local park. Working together outside the typical work environment will foster team-building and engagement, and serve the greater good.

Promote financial wellness. Workers who are stressed financially are not likely to perform their best. Offer a financial wellness program that gives workers access to resources that will help them address financial concerns, from credit report counseling to planning for retirement.

Swap services with local businesses. For the car wash down the street, for example, work out a deal where car wash employees get a free 10 percent discount at your restaurant in exchange for your workers getting two car washes for price of one.

Beef up incentives. Reward strong performance or a period of perfect attendance with a $250 gas card or Apple or Microsoft gift cards.