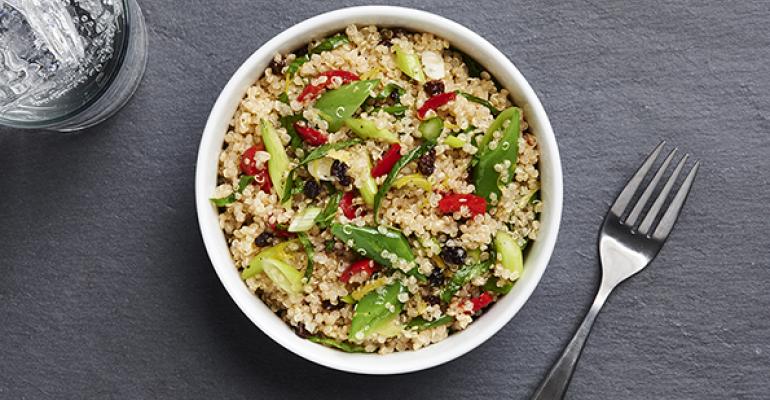 Fiber is rarely a sexy topic of conversation, but one of its top dietary sources — whole grains — is becoming increasingly fashionable among consumers.

Harding recalled trying to sneak whole-grain wheat varieties into a dish at a restaurant where he previously worked.

“I couldn’t call them farro and spelt. What I called them was Mediterranean pilaf, so customers knew what to expect,” Harding said. “But now, you attract people when you say farro, or spelt, or amaranth, or chia seeds, or whatever product you’re using.”

Restaurants have responded with alacrity. The term “whole grain” is mentioned on 40 percent more menus now than it was four years ago, according to Datassential’s Menu Trends 2015 report.

Certain whole grains in particular have increased their presence on menus by triple digits in that time. Quinoa is the standout, and is now on more than 7 percent of all menus and on nearly 20 percent of fast-casual menus monitored by Datassential.

“It eats really clean and light,” Harding said, adding that the flavor combination of heat from the peppers, savoriness from the herbes de Provence, coolness from the mint and acidity from the vinaigrette make it an engaging dish.

“You’ve got all those flavor combinations completing the palate,” he said, adding that whole grains need that kind of complexity.

He’s also testing whole-grain pasta, and has found that assertive, “defined flavors” with minimal fat work best with the more robust flavor of those noodles.

For example, a combination of roasted cauliflower, broccoli, garlic, tomatoes, Aleppo pepper and a light broth with just a little fat would taste great with whole-grain pasta, he said. On the other hand, fettuccine Alfredo or classic and fairly sweet red sauces would fall flat, he said.

Pesto also plays well with the nuttiness of whole grain pasta, according to Barker.

“And primavera vegetables, maybe with some sautéed shrimp or grilled chicken if you wanted to add protein to it,” he said.

Creating a sense of differentiation

James Musser, New Orleans-based corporate executive chef of 18-unit Copeland’s and four-unit Cheesecake Bistro, said he has been working to bring whole grains to his restaurants, whose customers tend to want to indulge.

He worked with Ochsner Health System to develop whole-grain dishes that comply with the hospital’s EatFit NOLA standards, which limit calorie and sodium content.

Dishes include sea bream with crab claws and a warm white-wine vinaigrette over whole-grain pasta at Copeland’s, and Salmorra grilled chicken seasoned with basil, cilantro and turmeric, with balsamic tomato broth over whole-grain pasta at Cheesecake Bistro. Although he saw initial success, “After we were done with the marketing push it kind of fizzled away and died,” he said.

“During the day in the office when we order food, our own restaurant is one of the last places we think about going,” he said, adding that he thinks that’s why dinner sales at the restaurants are twice what lunch sales are.

“People want to get back to work from lunch and not feel so weighed down.”

Musser is thinking of a whole-grain lasagna with roasted vegetables, but meanwhile, for the next menu change in early July, he is planning a quinoa dish with mushrooms and asparagus.

For that dish, he will sauté quinoa in oil, as he would for risotto or pilaf, and then cook it in salted water, finishing it with sautéed mushrooms and asparagus. The quinoa will be topped with chicken breast, pickled plum, honey and lemon vinaigrette.

The chicken will be dry rubbed with onion powder, garlic powder, cracked black pepper, red pepper and a little brown sugar. It will be refrigerated overnight and cooked wrapped to keep it most, and then finished with a hard sear on the skin side.

“You’ve got to be ready to have a limited audience,” he said. “It’s never going to be mainstream, but I think it also creates a sense of differentiation for your brand.”

Whole grains also can be used as a more subtle augmentation of a dish, such as what chef Sean Fowler does at Mandolin restaurant in Raleigh, N.C.

Fowler uses freekeh, a grain introduced to him by his chef de cuisine, Joel Schroeter, to crust pork tenderloin.

Like farro and spelt, freekeh is a type of wheat, but it’s harvested green and then set on fire to burn off the straw and chaff, giving it a smoky flavor.

Fowler soaks the freekeh in water for a day or two “until it almost starts to sprout.”

He brushes grilled pork with Dijon mustard that has been thinned with water, and crusts it with the soaked freekeh, along with lentils that he has also soaked, and finishes the dish in the oven until the coating is crisp.

“It’s a really nice contrast to the pork itself,” he said. “It almost tastes smoky, but it also has an underripe, green plant taste as well.”

He serves it with pork jus, turnips, carrots, braised cabbage and a carrot-top chimichurri.

Fowler also bakes whole-grain bread to stand up to other robust flavors. For example, this winter he baked oats, sunflower seeds, ground quinoa and barley in a sourdough ciabatta that he served with a clam dish. The clams were steamed in beer with hickory, juniper, guanciale and fennel.

“The broth itself tasted like a hearty winter dish. Instead of doing a simpler or more subtle bread, this had more going on. It had a warmer, heartier feel to it with the grains in there.”