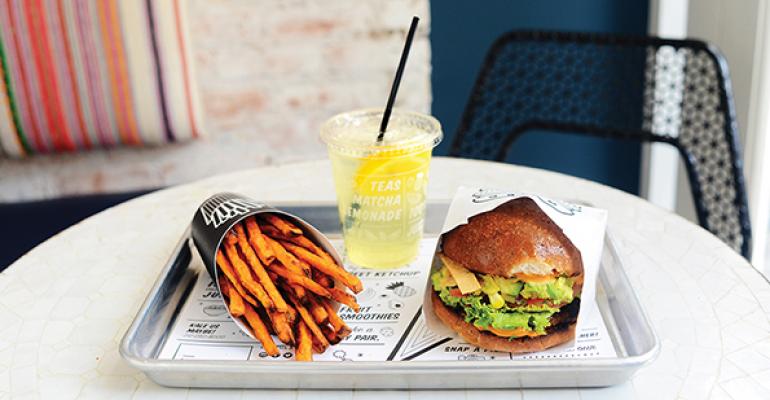 By Chloe partners with Whole Foods for LA expansion

ESquared Hospitality, which owns BLT Steak and 10 other restaurants, including By Chloe, said the supermarket, a less expensive sister to Whole Foods Market, would open in late May in the Los Angeles neighborhood of Silver Lake. By Chloe, which has been named the first partner in Whole Foods’ “Friends of 365” in-store program, would have its own space within the supermarket, ESquared said.

The restaurant will feature signature By Chloe menu items, including its Guac Burger, Quinoa Taco Salad, Mac n Cheese (made with a sweet potato and cashew sauce), Air-Baked Fries and desserts, along with market specials based on local, seasonal produce.

“As we countdown the days to the first 365 by Whole Foods Market grand opening, I’m thrilled to unveil our first Friends of 365 partner, By Chloe., in Silver Lake,” 365 president Jeff Turnas said in a press release. “By Chloe. truly embodies what we look for in partners — innovative businesses that align with our core values and introduce our customers to new food products and up and coming brands.”

By Chloe partner Samantha Wasser said: “We’re truly excited for the opportunity to announce our brand expansion outside of NYC and to bring the By Chloe brand to the West Coast by partnering with 365 by Whole Foods Market. To be the inaugural Friend of 365 in this venture is such an incredible honor and we’re looking forward to connecting with their like-minded customers.”

The restaurant was founded by cookbook author Chloe Coscarelli, winner of the Food Network’s “Cupcake Wars,” a lifelong vegetarian who has been vegan for the past 10 years. She is a native of Los Angeles.

“It’s thrilling to be able to bring By Chloe back home,” Coscarelli said in the press release. “Whole Foods Market embodies so many of By Chloe’s beliefs and interests, so to work alongside them to introduce 365 shoppers to the By Chloe menu is a dream come true. I hope LA is hungry!”

By Chloe was named a Breakout Brand by Nation’s Restaurant News in February, and is expected to open two more locations this year.