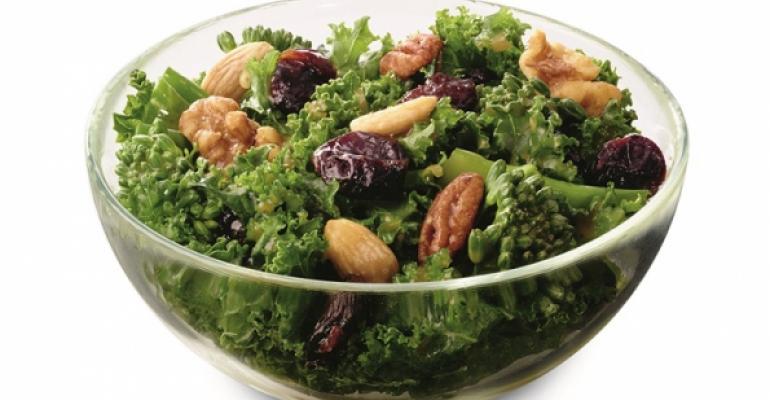 Chick-fil-A is removing a popular coleslaw side dish from its menu and replacing it with a premium, healthful salad of kale, broccolini, dried fruit and nuts, the company told Nation’s Restaurant News Tuesday.

The Superfood Side will be introduced on Jan. 18, the day coleslaw, which has been on the Atlanta-based quick-service chain’s menu for 49 years, makes its exit.

The new item is a blend of chopped kale and broccolini tossed in maple vinaigrette and topped with dried sour cherries, served with a blend of roasted walnuts, almonds and pecans. It will be priced at $2.59 for a 5-ounce portion and $3.79 for 8 ounces. The small size has 140 calories and the larger portion has 170 calories.

The medium coleslaw, by contrast, has 360 calories.

“We know many of our customers love our Cole Slaw,” Chick-fil-A said in a statement when it announced the item’s removal last week, “yet we have also heard from them they are looking for new tastes and healthier ways to eat in our restaurants. To provide this variety means we will occasionally have to remove items from our menu.”

David Farmer, the 1,900-unit chain’s vice president of menu strategy and development, said in a release announcing the new item: “The Superfood Side is not something you would expect to see at a fast-food restaurant, and we’re thrilled to kick off 2016 with something that can help people stick to their New Year’s resolutions to eat healthfully. Customers who have tried it rave about having an option that’s incredibly healthy where you don’t have to sacrifice great taste.”

Chef Fry said: “I really enjoyed working with the culinary team from Chick-fil-A on incorporating ingredients that are unique to the industry. We know that it can be challenging to eat healthy on the go, so we wanted to create something that customers will love eating that’s also nutritious.”

Chick-fil-A has experienced rapid growth in recent years, with $5.7 billion in sales in 2014, a 14-percent increase over the previous year, according to Nation’s Restaurant News Top 100 data. Although it is best known for its fried chicken sandwiches and waffle fries, the chain has also been offering lighter items, including a grilled chicken sandwich that it rolled out in 2014.