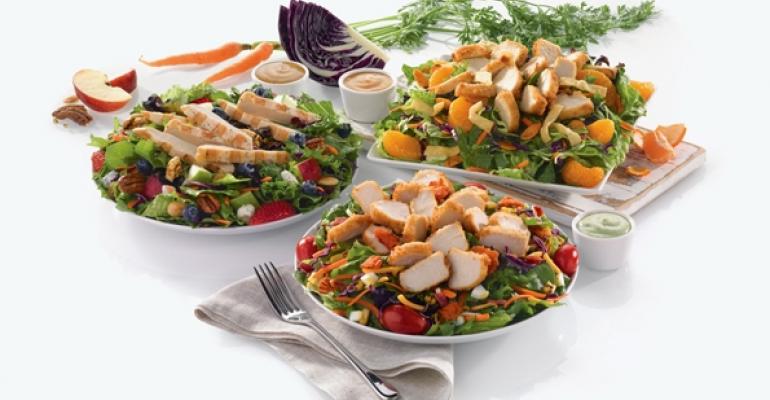 Chick-fil-A is targeting health-conscious consumers with the addition of new menu items that feature premium ingredients.

Starting on April 29, the Atlanta-based chain will offer new premium salads — a Cobb Salad, a Grilled Market Salad and an Asian Salad — at its more than 1,700 locations. The chain will also introduce a Grilled Chicken Cool Wrap and an improved side salad.

The new entrée salads mark a departure from the quick-service chain’s signature fried chicken sandwiches. Consumer preferences are changing, and Chick-fil-A wants to keep up with the curve, said Chick-fil-A Inc. vice president of product strategy and development David Farmer in a statement.

“We took a hard look at our current salad line and decided those options were not as relevant to consumers as they were just a few short years ago,” he said.

Chick-fil-A also released an infographic along with its new salad announcement. According to the infographic, half of consumers want restaurants to offer healthful foods and 48 percent of consumers are very likely to try new or unique flavors on menus.

Chick-fil-A spokesman Mark Baldwin said the company isn’t totally new to health-conscious consumers. In 2004, the chain added a fresh fruit cup, and it offers 12 lunch and dinner entrées that each contain fewer than 500 calories, he said in an email.

have recently targeted health-conscious consumers with new menu items. Both McDonald’s, which introduced McWraps in March, and Wendy’s, which added Flatbread Grilled Chicken sandwiches last month, have improved their brand images by adding what consumers perceive to be healthful items, according to YouGov BrandIndex.

Chick-fil-A’s new premium salads come on a base of romaine lettuce and baby greens, and can be served with any dressing.

The Chick-fil-A Asian Salad is made with sliced Chick-fil-A chicken nuggets, shredded green and red cabbages, carrots and mandarin orange segments. The offering is served with Chick-fil-A’s Chinese Garlic & Ginger Wontons and Honey Thai Almonds. The company recommends that guests pair it with Honey Sesame dressing.

The Chick-fil-A Grilled Market Salad is made with grilled, sliced chicken breast pieces and topped with shredded red cabbage, carrots, red and green apples, blue cheese, strawberries and blueberries. The item is served with Harvest Nut Granola, a Roasted Nut Blend and is paired with Zesty Apple Cider Vinaigrette.

Chick-fil-A also said it would add calorie counts to its menu boards nationwide. The brand said it is adding the information to guide consumers to make informed dining choices at Chick-fil-A. “We have never shied away from making this information readily available for our guests,” Farmer said.

According to Chick-fil-A, the company had more than $4.6 billion in sales during 2012.