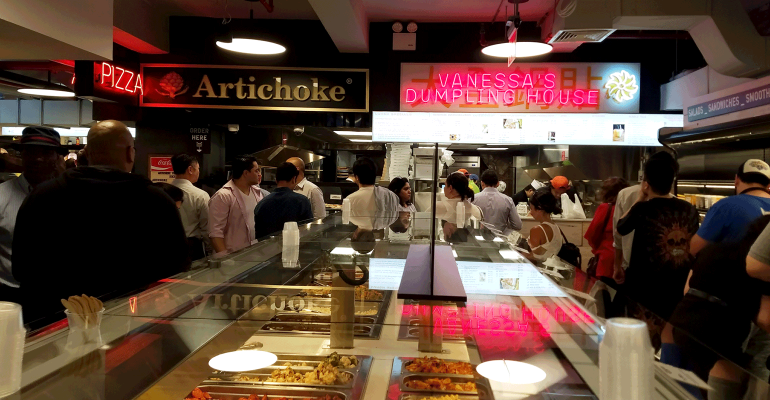 Partners Colin Xie and Jason Chung, who together operate several Key Food stores in Queens, are co-owners of the new food hall. According to Chung, the concept grew out of a store they also operate under the same name in Brooklyn’s Williamsburg neighborhood. That store opened in late 2013 under the Urban Market banner of the Key Food Stores Cooperative. The store adopted the new banner earlier this year because they wanted a brand they could control, Chung said. The City Acres stores no longer belong the cooperative, although the partners’ other grocery stores still do, he explained. Food halls, which originated in Europe, have gained increasing popularity in the U.S. as consumers seek out authenticity and variety provided in a lively, market-style setting. Such venues are particularly popular among Millennial shoppers participating in the “foodie culture” according to Garrick Brown, a VP of retail research for Cushman & Wakefield who has reported extensively on the trend.

In New York, food halls have sprung up at specialty food stores like Eataly and Whole Foods as well as hotels, and train stations.

In an interview at the store Tuesday, Chung credited his partner Xie, along with executive chef and creative director Stephen Yen, for curating the assortment of offerings in the food hall.

“We visited almost every food hall that existed in the city, and got some ideas, and shopped around as to what vendors we thought would work here,” he said. “I think Colin did a tremendous job. He spent a lot of time with them figuring out what he thought was the right mix.” The cheese department in the City Acres grocery store, one level down from the food hall

Chung said those shops are not tenants of the supermarket but run their own businesses, but all vendors share in the profits.