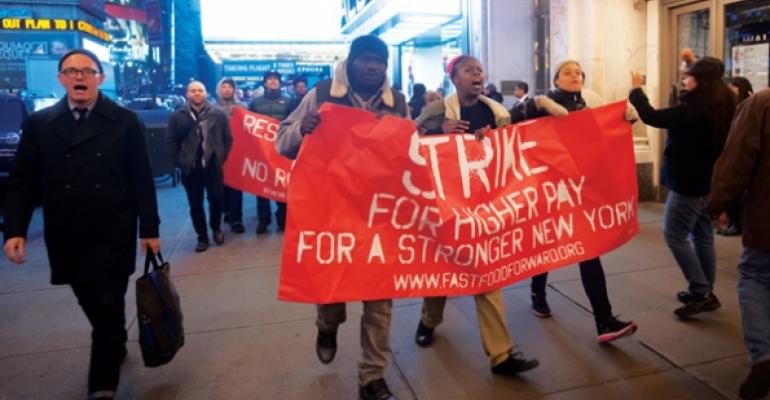 Mike Mulligan, co-owner of MikLin Enterprises Inc., an 11-unit Jimmy John’s Gourmet Sandwiches franchisee in the Minneapolis-Saint Paul area, occasionally speaks to other restaurant operators about his struggle to keep his small company from becoming unionized.

MikLin has moved beyond its narrowly won victory against unionization and is thriving once again, he said. But if a union does come calling, Mulligan cautioned other restaurateurs, “It will be absolutely the most difficult experience you’ll ever go through.”

Historically, the industry’s high turnover has helped it remain largely union-free, but that could change in 2013 as more unions turn their sights on restaurants.

Several factors are driving their interest. With union membership declining nationwide, unions are compelled to strengthen their numbers. At the same time, labor-friendly forces in Washington continue to line up behind regulations that opponents say favor penetration in the industry. And the industry remains unable to shake its image as a less-than-optimal employer — especially as it relates to compensation and benefits.

Organizations like Fast Food Forward, Unite Here and the Industrial Workers of the World claim that many nonunion restaurant employees — notably those in the quick-service sector — are being forced to subsist on entry-level wages and part-time hours that often place them below the poverty level in terms of earning power.

Some groups also are maintaining that restaurateurs are further cutting employees’ hours in an effort to avoid paying for workers’ health insurance under the federal Patient Protection and Affordable Care Act. As a result, they said they are already fielding complaints from disgruntled restaurant workers — and those could emerge as possible recruitment opportunities down the road.

Jim DuPont, director of the foodservice division of Unite Here, a 300,000-member service-sector union based in New York, said his group has heard anecdotal evidence of nonunion employers cutting back workers’ hours below the official 30-hour-a-week full-time level to avoid paying for employee health care benefits.

“There’s been a dramatic uptick in the number of people calling us cold from restaurants around the country because of the issue and saying we need a union here,” DuPont said. “Health care is becoming a tipping point. You have [restaurateurs] saying, ‘We’re not going to offer full-time jobs anymore,’ and foodservice workers are getting angry.”

DuPont said Unite Here is exploring the best way to deal with such calls, adding, “It seems like too good of an opportunity to pass up.”

Already health care is showing up in union rhetoric. During a recent contract dispute at The Post House restaurant in New York, picketing employees distributed leaflets stating, among other things, that management wants to hire part-time workers “with no right to insurance or pension benefits to do our jobs.”

Industry executives contend such claims are not true. However, many acknowledged that restaurants are emerging as a target of opportunity for unions looking to deepen their membership ranks.

Angelo Amador, vice president of labor and workforce policy for the National Restaurant Association, pointed to the industry’s growth as appealing.

“[The unions] killed the cash cow of manufacturing, and nobody is growing but [the restaurant industry],” he said. “If you’re a union, you go where the jobs are; you don’t go to shrinking industries. From their perspective [foodservice] is not as big a take [as manufacturing] — it would be several little fish instead of one big fish. But at least it’s something.”

“Service industries are generally not unionized, but I do think there is an opportunity for organic growth of unions [in that sector],” he said.

A recent study issued by the Bureau of Labor Statistics found total union membership declined from 2011 to 2012 by almost 400,000, to 14.4 million members, falling from 11.8 percent of the total workforce to 11.3 percent. According to the BLS, in 1983 — the first year for which comparable data was available — there were 17.7 million union workers, 20.1 percent of the workforce.

The BLS also said union membership in food-preparation and serving-related occupations fell from 305,000 in 2011 to 298,000 last year.

But while membership may be in decline, 2012 also was marked by an event late last year demonstrating that organized labor still had plenty of muscle to flex. A group called Fast Food Forward organized several hundred employees at such quick-service chains as McDonald’s, Burger King, Domino’s Pizza and KFC in New York for a highly publicized one-day strike. Mobile picket lines were moved around the city throughout the day, thereby ensuring greater visibility and impact.

The goal, protesters said, was to raise their hourly wages from the current minimum wage of $7.25 an hour to $15 an hour, while giving workers the right to unionize at their respective restaurants “without fear of retaliation.”

According to the BLS, an estimated 3.6 million people were paid hourly rates at or beneath the federal minimum wage in 2012, down from 3.8 million in 2011.

Jonathan Westin, organizing director of New York Communities for Change and a chief organizer of the action, said the strike was successful in drawing the public’s attention to the economic problems of city service-sector employees and attracting additional workers to its ranks to participate in future union activities.

In the wake of the strike, “the number of workers involved has gone up quite a bit,” Westin said. “We’re expecting to double the original number [of participants and get people] more actively involved this year.”

Foodservice executives argued that restaurants are being targeted unfairly. The industry — which currently employs 13.1 million people, a number that is expected to grow to 14.4 million by 2025 — has long held that it is an important source of entry-level jobs and provides a career path, good wages and benefits for those who choose to make it their industry of employment.

Westin disputed that, saying, “We see people in fast-food jobs coming in at minimum wage and then working for years and still barely making $8 an hour. We’re not seeing room for advancement.”

Meanwhile, the battle between unions and the foodservice industry for the hearts and minds of employees is being waged on Capitol Hill as well as in restaurants and on the streets.

After the Employee Free Choice Act, also known as “card check,” failed in the Senate in 2010, and Congress declined to throw its support behind organized labor, many of the battles have shifted to the courts and regulatory agencies — notably the National Labor Relations Board, which critics said has taken a more activist stance in its attempts over the past several years to regulate the workplace.

“The NLRB changes with the different administrations,” said Rob Green, president of the National Council of Chain Restaurants. “And this one is too pro-labor. It has been aggressively attempting to change precedent and impact the process through rule making.”

According to the NRA’s Amador, the industry has been fighting three key labor issues for several years:

• Micro-unions. Currently enforced by the NLRB, the micro-union ruling enables individual sections of a restaurant —  kitchen workers, for example — to unionize independently of the rest of an operation’s employee population. The industry supports the traditional retail “wall-to-wall” policy, which requires an all-or-nothing unionization vote on the part of employees.

• Ambush elections. Invalidated by a U.S. District Court judge, this NLRB regulation sought to accelerate the time frame allowed for union elections from an average of 38 days to as few as 10, a move opposed by restaurateurs.

• Poster rule. The NLRB issued a ruling compelling employers to post an 11-inch by 17-inch notice in the workplace informing employees about their union-organizing rights. The ruling, which is also unpopular with the industry, had been scheduled to take effect in April 2012 but remains legally contested, so no new deadline has been set.

Even as the NLRB pursues legal actions to enforce these regulations, they all could be further challenged — and even thrown out — if a January 2013 ruling by a federal appeals court in the case of Canning v. NLRB is upheld. The court ruled that President Barack Obama violated the Constitution when he made three recess appointments to the NLRB in January 2012, asserting he did not have the power to bypass the U.S. Senate and appoint the judges. As a result, the judges lacked the authority to establish regulations.

While the administration is expected to take the case to the U.S. Supreme Court, a ruling upholding the lower court’s decision could put the three regulations — as well as hundreds of others — back in play.

“If the court case stands,” said Scott DeFife, executive vice president of policy and government affairs for the NRA, “it could be as if none of those decisions ever happened. It’s one of the biggest issues that has confronted the [foodservice] industry that also intersects union activities.”

The NCCR’s Green also voiced concern about the administration’s plan to change the “persuader rule.” Previously, employers who sought union-related advice from consultants and law firms were not required to report it so long as the consultants did not have any direct contact with employees and only acted through employers. However, the Department of Labor wants to change that and require that employers report all contracts — and what they’re paying — with lawyers or consultants involved in labor relations, regardless of the work they’re doing.

President Obama in his State of the Union message also resurrected debate on the federal minimum wage, an evergreen issue with labor. The president proposed that the existing minimum wage of $7.25 per hour be raised in stages to $9 by 2015.

“Minimum wage hasn’t moved in years,” Unite Here’s DuPont said. “If employees are no longer getting the hours and their wages stay low, ... how can a company expect loyalty from its workers when the company doesn’t show any loyalty to them? The social contract is gone for low-wage workers.”