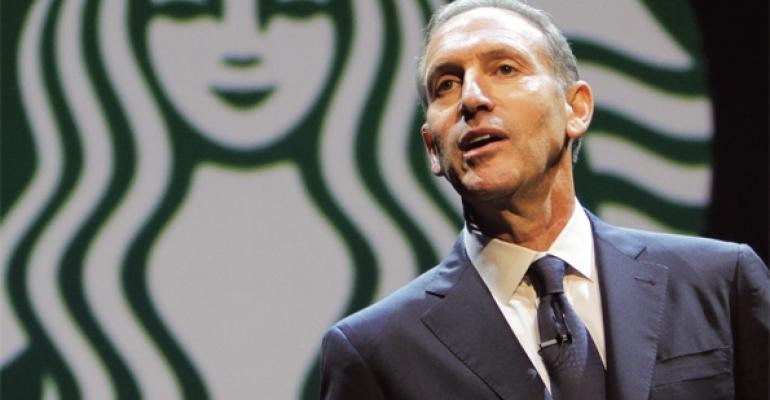 Starbucks’ Howard Schultz drew both support and ire after he made comments regarding the company’s support of same-sex marriage during Starbucks’ March 20 shareholder meeting.
News

Howard Schultz drew both cheers and jeers at Starbucks Corp.’s annual meeting in March after he told off an investor who questioned if the company’s support for same-sex marriage was hurting sales.

Pushed to defend the Seattle-based chain’s 2012 decision to endorse gay marriage legislation pending in its home state, Schultz stood his ground, noting the importance of diversity among Starbucks’ 200,000 employees. The chain’s chairman, president and chief executive then welcomed the detractor to invest elsewhere.

“If you feel, respectfully, that you can get a higher return than the 38 percent you got last year, it’s a free country,” Schultz said. “You can sell your shares of Starbucks and buy shares in another company. Thank you very much.”

This is part of a special report from Nation’s Restaurant News. See the full section >>

While Schultz, who in 2011 also urged business leaders to withhold contributions from U.S. lawmakers until they tackled the country’s fiscal crisis, doesn’t appear to shy away from the political spotlight, other operators, like Chick-fil-A and Buffalo Wild Wings, have found its glare uncomfortable.

Given the industry’s many high-profile brands and restaurants’ emerging role as a gathering place or “the new town square,” more companies can expect to be sucked into the emotional vortex of divisive debates, said Joe Kefauver, managing partner of Orlando, Fla.-based Parquet Public Affairs and a contributor to Nation’s Restaurant News.

“A lot of activists make their points on the back of the brand,” he said. “And in our industry they’re accessible. It’s hard to make IBM your forum, but it’s easy to make Wendy’s your forum.”

Add the lightning-fast communication of social media, and the possibility of landing in the center of  volatile debate is magnified.

That’s what happened to Chick-fil-A last year when Dan Cathy, president and chief operating officer of the 1,600-unit quick-service chain, confirmed his support for traditional marriage between a man and a woman to a Christian news wire service.

Within days the story had set mainstream and social media ablaze, prompting both boycotts and an “appreciation day” that resulted in what the Atlanta-based chain called “unprecedented” sales. Still, many observers advise against speaking out on social issues.

Most consumers share that line of thinking, according to a recent survey by Global Strategy Group, a public affairs firm with offices nationwide. Consumers do, however, differentiate between theoretical stances and actual ones, and they appear to be more accepting of real situations.

In a survey of 806 adults conducted late last year, only 31 percent said it was appropriate for companies to take stands on social issues, in theory. But when presented with the real-world scenario of Nordstrom supporting same-sex marriage and partner rights, 68 percent said the position was appropriate.

“What this indicates is that in the real world the public evaluates the appropriateness of a company’s political stance from a variety of angles, including its relevance to the company’s business, the substance of the issue and how it’s positioned by the company,” said Nick Gourevitch, GSG’s senior vice president and director of research.

Even when a brand stays mum on a controversial social issue, it can still become part of the furor surrounding it.

That happened to Buffalo Wild Wings last December when — just prior to the shootings at Sandy Hook Elementary School in Newtown, Conn. — a CBS affliate TV station in Harrisburg, Pa., ran a story about the casual-dining chain’s policy of banning guns in all company stores.

As discourse over gun control escalated following the Newtown shootings, so did the conversation criticizing and defending the gun-ban policy on the 900-unit chain’s Facebook page. The result, according to social media analytics from TrackingSocial, was a steep drop in week-over-week audience growth as measured by new likes on the brand’s Facebook page. That rate fell from 0.73 percent during the holiday season to 0.26 percent in January.

To avoid being affected by the roller coaster of public sentiment, brands need to know what their stakeholders think before they take a stand on a controversial issue, and be prepared for any fallout, GSG officials said.

“It’s essential for companies to know where their key audiences stand on matters of importance to their business,” said Alan Sexton, executive vice president of GSG. “Businesses don’t need to automatically shy away from the practice because of the potential risks, but they need to weigh the factors carefully. In order to reap the potential benefits, careful planning and preparation need to be part of the communications strategy.”