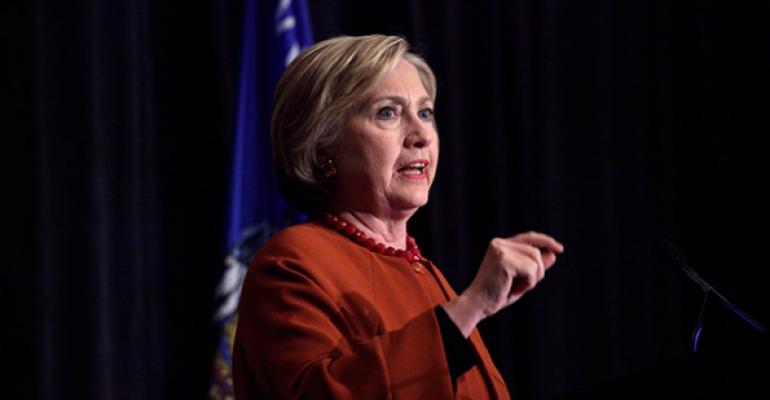 New York workers will be able to take as many as 12 weeks of employee-funded paid family leave in the budget deal and minimum-wage increase signed Monday by Gov. Andrew Cuomo.

“This morning I signed a bill into law … and that bill will grow this state’s economy for everyone. It will restore economic fairness and will make life better for over two million New Yorkers when we raise the minimum wage to $15 an hour,” said Cuomo, at a rally at Jacob K. Javits Convention Center in New York with Democratic Party presidential candidate Hillary Clinton and labor leaders.

Clinton said she would seek similar a similar expansion of family leave at a national level.

The New York budget deal also included paid family leave so both male and female workers can care for a new baby or ailing relative or relieve family pressures when someone is called to active military service.

“We are restoring respect and pride and dignity to the worker with paid family leave, which says no one should choose between seeing their child born and earning a paycheck,” Cuomo said.

The federal Family and Medical Leave Act offers an unpaid 12-week national family leave policy nationwide, but about 40 percent of workers are not covered because of such limits as working for companies that employ fewer than 50 people or work part time.

"This program will be funded entirely through a nominal payroll deduction on employees so it costs businesses — both big and small — nothing," Cuomo said told a Syracuse publication.

Under the deal, New York workers will have a 70-cent-a-week payroll deduction to pay for the program. That will increase to about $1.40 a week.

Clinton said that, if elected, she would seek similar legislation at a national level.

“Too many New Yorkers and Americans face impossible choices,” Clinton said at the rally. “When you have a new baby and you’ve got to go back to work in 48 or 72 hours, it’s bad for the baby, it’s bad for you, it’s bad for your family. It’s just wrong. We are now going to end that in New York.”

As for getting time off to care for sick relatives, Clinton asked, “What kind of society are we that we don’t let people do the most important work there is: caring for each other, support each other? … I will proudly take what’s happened here in New York and go to Washington to get paid family leave for everyone.”

Labor leaders thanked the governor and the New York lawmakers for the minimum wage and family leave provisions.

“Thank you, New York, for leading the way,” said Mary Kay Henry, president of the Service Employees International Union, which represents service and health-care workers and had pushed for the provisions.

New York’s new minimum wage contains a series of increases that would boost the paychecks of 2.3 million workers by region. It calls for increasing the minimum wage to $15 in New York City by the end of 2018, though businesses with fewer than 10 employees would have an extra year. It would climb to $15 on Long Island and in Westchester County in six years, and increases would be more gradual in upstate New York, reaching $12.50 in six years and further increases tied to economic indicators like inflation.